Also what are Attributes gonna be?

It’s based on their internal system, so it just means the item attached to that change was not yet closed, so it appears again in this release.

What is the API for doing this? Any reference anywhere?

So is the AvatarEditorService usable in-game? I’ve just started building a game that will feature an avatar editor, and being able to natively search the catalogue as opposed to creating a web API or an “import asset” GUI would be much more convenient!

@grilme99 I seem to remember someone saying it’s a checkbox in Chat properties…? I’m sure an admin will correct me if I’m wrong.

Nope, doesn’t seem to be. 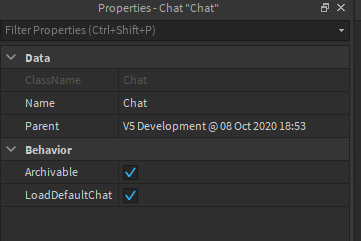 I’ve worked on the new bubble chat - to answer your questions: the API for enabling it will be a checkbox under Chat service, though it has not been enabled yet. No worries, it will be off by default.

This was also asked and answered in the replies for 450:

This specific duplication typically happens when there were significant enough issues with the initial implementation / API of a feature that it was mostly thrown away and redone.

[image] What is the API for doing this? Any reference anywhere?

I’ve worked on the new bubble chat - to answer your questions: the API for enabling it will be a checkbox under Chat service, though it has not been enabled yet. No worries, it will be off by default.

@IAmPinleon Attributes were added a while back, but, they haven’t been released yet. Basically, you can store extra data on instances and it can save on the instance just like tags do. Most data types are supported except certain ones like threads or functions since those can’t exactly be serialized easily. (Although, I could see the possibility of functions being possible, they just aren’t). You could, for example, add a “Health” attribute to something, and, you could adjust it in studio, save the game, and it would keep this attribute.

Now for the actual update stuff

This is extremely useful!

There are so many times I’ve been at a loss for why my modules are not working only to realize “Oh they’re requiring eachother” after 30 minutes of debugging (I was getting better at catching this but uh, either way, this was, and is confusing)

This is very interesting, and, I’m glad to have more control over quality level… There are a lot of in between features that I’d love to turn off in some games, such as DOF, without sacrificing too much else.

This is certainly cool to see, I’m hyped for more parallelization, and possibly some perpendicular bisectors

A lot of updates for the release notes are from the previous Release Notes somehow, a bug or intentional?

This is going to be a huge reply…

This seems important for us scripters to somewhat cleaning up a line if I’m correct here, but what other usecaes or a better explanation would this function do for a line? I’m guessing this just cleans up

A whole ton of these bugs being fixed, but the terrain tools and a warning when you attempt to move a part has been patched if I recall? Shouldn’t those not be pending but rather live so it wouldn’t confuse me and other developers since I can’t reproduce or have this error anymore.

With the GraphicQuality and that value change for in-game settings, that does seem sweet and cool to have but how will it affect gameplay and the quality of what us users see when we set it to 1 or 21 if that’s what the Release Note(s) mentions in it with in-game settings?

Since it does say the existing behavior, what affects/effects will the SavedGraphicsQuality do if a user extends the graphic quality like to 17 or 20 with performance-wise? 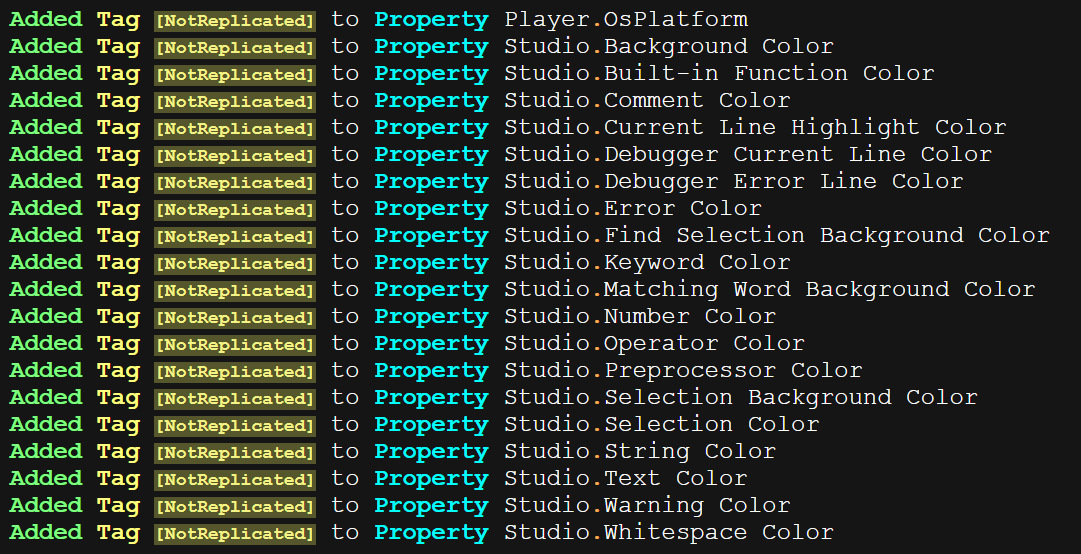 In the syntax version of the Release Notes with hidden figures and Enum(s), what do these changes and “Tags” mean and how do they affect us? A lot of changes at the bottom of the syntax version as well, does this include the new syntax highlighting for the code that was mentioned here a while ago or more settings to customize?

Each quality level enables or disables certain graphics features, 21 being equivalent to level 10.
Basically, 1-10 translates somewhere between 1-21, and, each level in all 21 controls some graphics features. This gives us more control over which features get disabled, aka, features won’t get disabled as quickly.

These are automatic tags associated with the internal bit-flags that were set on each property. In this case, the properties were updated to no longer serialize directly in Roblox’s GlobalSettings.xml file. Instead they are serialized elsewhere, through registry keys on Windows in particular.

This change has to do with the theme presets they’ve been adding. They needed a more elegant serialization scheme for studio’s script editor colors, and so they’ve updated the properties to only be read from the xml settings file. They will no longer be written to the file.

My API diff tool is merely a reflection of the signature changes to these APIs, and they may not provide adequate enough context alone to what the changes actually mean. You have to have some internal insights to how Roblox’s reflection system works to fully know what the changes ultimately mean.

For example, properties that are flagged as load-only will automatically have their built-in replication across the server/client boundary disabled, hence the [NotReplicated] tag. This is a behavior inherent of all properties, despite the settings class not interacting with network replication.

@grilme99 Looks to be added to the developer hub now:

Slightly confusing since it states:

To enable BubbleChat without forking Chat , developers only need to add a few lines of code inside of a LocalScript in ReplicatedFirst .

Despite Chat being a service and not forkable? Do we have to fork the chat modules for this property to take effect?

This topic was automatically closed 180 days after the last reply. New replies are no longer allowed.