The title says it all.

Polls are constantly abused by new members to try and make irrelevant points, like them having a poll to say ‘DO YOU HATE THIS NEW FEATURE I DISLIKE??’.

Removing poll access from new members (even if its just removing the poll builder, and not the poll markup) would drastically discourage and reduce these spammy and cluttery posts.

Alternatively, misusing polls could be made against forum rules, meaning we can flag these posts that add nothing but spammy polls to the discussion.

Misusing can be done with any aspect of the forum. I don’t see why polls should be restricted. If you see a bad poll, just flag it. This is true with everything.

Straight up not letting members use polls is not a good idea. You’re just closing doors.

This blanket ban will be punishing members who actually use it in a good way. A blanket ban is not the solution. Just because there’s a few bad actors doesn’t warrant the stripping of poll creating for all members.

While I believe this might be a tad bit too extreme I do agree that polls are often abused and make it seem like the answer to whether or not a feature request or something is getting added.

Polls are helpful. They help show everyone’s general opinion in a condensed format, and allow people who aren’t willing to articulate their point to share their opinion.

Also, here’s a poll on this, haha.

Alternatively, misusing polls could be made against forum rules, meaning we can flag these posts that add nothing but spammy polls to the discussion.

Personally, preventing users from doing polls is not necessary. I think the option I quoted is better. There are still many good polls. Just make that a rule.

How do you determine which members classify as a new member and which do not? Did you actually mean all members?

If you meant the latter, I wouldn’t support this new restrictions from being made as it’s serves as a slap in the face of members who correctly uses the Poll feature or any other feature for that matter.

A few bad apples in a tree doesn’t mean the entire tree is rotten.

He means Members. Since Member used to be the name for Regular, some people find it clearer to call them “New Member” and “Regular” (or “Full Member”) to avoid ambiguity.

As someone who is very strongly against the opening of catagories to members, this is one change I disagree with, polls are useful and can provide the OP with data they are not malicious in these Lea; it’s the posts which are the issue

I don’t believe this is possible to do in the first place. There’s an unanswered feature request on Discourse Meta related to restricting poll creation to certain trust levels, though that’s from 2016 and the information I’m working with could be fairly outdated. Still looking.

Even then, don’t think this is appropriate to pursue. Who’s to say Regulars won’t - or haven’t already - abused polls in the same vein that you’re saying Members are doing now? Seems like another anti-member point and it’s really annoying to see these.

I last recall that unnecessary polls could be candidate for removal if raised, but I don’t know if Community Sages are still on top of this or not. I don’t think DevRel would unless it’s clearly obvious that the poll is distracting or otherwise unhelpful to include.

This is still an issue and is leading to spam with discussions and announcements. (ignore the red box) 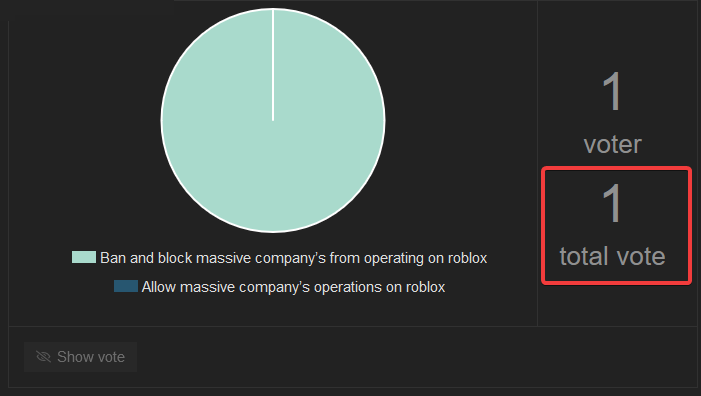 This is not a good idea. I only ever see bad polls in #updates. You can also make polls in #help-and-feedback, this can be useful to see what design is more popular when asking for feedback, for example. I don’t think we should restrict a critical feature due to a few bad apples.

I don’t think we should restrict a critical feature due to a few bad apples.

Can you provide examples of how this is a critical feature, and basic forum usage would be impaired by it?

For example a user might post two variants of a house. One of them could be red and one could be blue. They could make a poll to determine what design is the most popular, like this.

They could then use this feedback to determine what house would look better in their game. You could argue that you could just respond with your opinion but that would add even more clutter to the forums.