As a Roblox developer and a player, it is currently risky to have one item on catalog in it’s current state.

Crown of the Undead Hoard which was an item made before the game had Xbox support has red blood on each zombie.

Why though? Roblox really cares about age rating for Xbox One, which can be seen when we make our game compatible with said platform.
Since it’s an official item which appears in catalog and in-game once someone wears it - it could bring many issues. 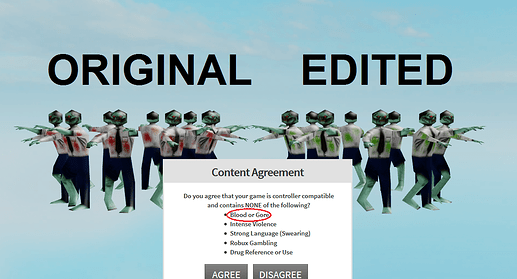 I personally reported the issue to Twitter’s DevRel just in case.

@
Hello @robloxdevrel, can you check this issue? It's very important and could block your Xbox license if you don't do anything. I'm Dogutsune (1371995) on the site.

I offer usage of my texture I have made for this sole reason.
Green blood counts as cartoon blood, which won’t damage the age rating in any way.
This fact has been used by many Roblox developers.

If Roblox does something about this issue, it would prevent taking away the Xbox licence if someone finds out about existance of this hat.

EDIT 1:
Someone noticed that Crown of Om Nom Nom looks like it has bloody gums. I made another fix in case. It’s just a small edit.

EDIT 2:
Sarge Extreme Face is offsale, but it never hurts to do something. I have a decal I made in past for that.

EDIT 3:
Zombie Friend Fred is a gear with some blood on it. I made fix for the texture and it’s icon.

If you happen to find other asset, let me know.

I found a new asset which I will add soon.
https://www.roblox.com/catalog/36784258/Zombie-Friend-Fred

I’m continuing this conversation, since I noticed Roblox did many steps to alter older accessories.

Example: Removal of Confederate content and Friday the 13th reference.
I think those items should be affected as well.