Studio performance when opening/playing games is much worse

I was having a similar issue with one of my games. It would take a long time to open the place or to stop Play Solo sessions, even on a local file. In fact, it would freeze Studio as if it was about to crash.
The same game uses FastCast, which takes advantage of Luau Type Checking. It’s the only thing in the game that uses the type checker. I noticed that when I opened some of its scripts, the same issue would happen when trying to close them or trying to erase the type checker annotation (at the top of the script). After I erased all the annotations, therefore disabling type checking, all the issues were gone. So I wonder if this could be related to the type checker somehow?

I began experiencing this issue as of the 6th of January. Some notes I noticed along side your observations:

Steps I have attempted to resolve the issue:

Based on what I have discovered so far, this an internal issue with studio and somewhat unrelated to the hardware being used as I have never experienced this issue prior.

My task manager while attempting to exit a test mode:

I also use FastCastRedux and can confirm, removing the type checkers seems to step on a land mine when trying to delete. My issue seems to be somewhat fixed so I do believe it has something to do with the type checkers although can’t confirm this entirely.

Having the same problems, on a couple of my games, it will typically shoot robloxstudio into “not responding” for usually 10-ish seconds, or higher based on if the game has more content in it

This is the first time i’ve seen this happen within the script editor so I can’t definitively link it to type checks.

Not sure if the typechecker has anything to do with this issue. That seems like a different problem since inserting FastCast just freezes Studio outright. I have some code in my game that uses types and removing it does not resolve the problem.

Thank you for you immediate response. We do appreciate it.

I think this falls in line with a previous report I made, where I found a combination of type checking stuffs that just flat out nukes studio. Setting Table.__index = Table in this setup causes crash in strict type mode is where I reported it, tl;dr to get my place back and find the cause, I had to resort to reverse engineering my own save file. @PeZsmistic actually helped out in verifying this issue.

Seeing this potential for damage I do hope it gets fixed quickly, seeing that it makes editing places very difficult for those who want to deal in more modern standards of scripting.

The issue seems to have resolved for me around the time you posted. Performance is exactly the way it used to be.

@Mullets_Gavin do you see any improvement?

I see an improvement already. The repro file I used to isolate that crash no longer causes studio to hardlock, and it loads just like any other place file.

I also tried to open the original place prior to my manual modifications needed to isolate the problematic script, and it too no longer causes studio to hardlock, so it seems that the underlying issue has been resolved, at least from a look on the surface. This is good to see!

Performance has definitely returned to its original self. Loading/unloading into Play Solo sessions is no longer yielding, and I have no further performance issues.

Just opened ROBLOX Studio today and got this

Not sure what to do about it sadly.

I experienced the issue too previously in the day, it seems to have been fixed for newly created places but when trying to open old places, especially when switching between different scripts from the script editor, studio becomes unresponsive for 10-20 seconds. Loading times are still high for me. From what I have noticed, this problem doesn’t seem to appear only for strict mode scripts but no check and non strict ones too. I have been unable to work due to this issue, hoping for it to be resolved completely soon.

Have been getting this for a few days… But it still saves the game after error.

Opening projects is greeted with asset delivery errors. Same as above-mentioned by @BosOfroblox
Loading into Play Test is slower than usual, but not as slow as yesterday. 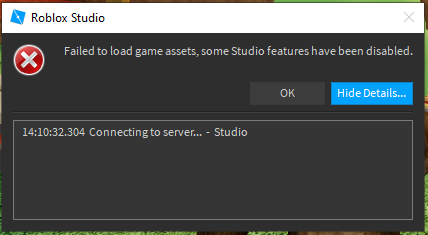 It has been really slow for me. Playing solo takes way longer to load in.

Do you have this https://www.roblox.com/library/4453855787/FastCast-Redux in your game?
My loading and stopping play got back to normal speed after removing that.
(It was just in the root of my Workspace as I was testing something earlier with it.)

This topic was automatically closed after 6 days. New replies are no longer allowed.