Hey guys, so recently I have been trying to animate a shovel tool.
I followed Headstackk’s Guide and everything went accordingly, I was able to animate the rig with the tool attached to the dummy via a Motor6D.

But when I try to play the finished animation in-game, the animation for the tool does not work.
The animation itself works, the character does what it’s supposed to, but whatever I animated for the tool, it simply does not show.

I’ve spent an entire day trying everything, I don’t know if I missed something from the original thread, or if there’s something I’m supposed to do that isn’t actually mentioned on the thread itself, but I have not been able to find success.

This is how the animation looks in-game:

This is how the animation is supposed to look:

This is how the tool is setup (all parts are unanchored) 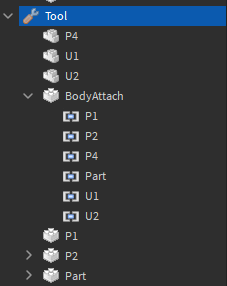 I’ll be glad if someone could help me on this issue, Thanks in advance.

Usually this happens if your using a R15 animation pack or something different to the one you animated it on, which is a standard R15. Try it with a simple R15 character.

I don’t really know if I’m using an animation pack, how would I check? The animation was created for a R15 rig and it’s being played on a R15 character, if that’s what you were referring to?

You can just change it in your Roblox avatar page to a simple R15 with no applyed animations. Then it will probably solve it as the package you where using here 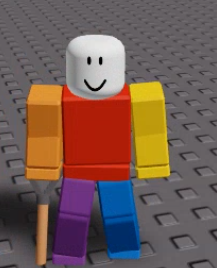 It seems a bit thin so the animation will act differently or not intended. I hope this helps.

Judging from the Gif that you’ve provided, I think you used the default weld Right Grip on the right arm. You have to create a Motor6D connecting UpperTorso and the Root part of your tool.

Does it make a difference if i hook it up to the RightHand instead of the UpperTorso? 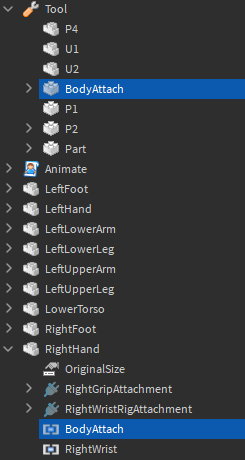 It does! If you connected to torso initially when animating, you have to do the same for the real player too.

The BodyAttach did show in the animation editor, meaning that the animation works, It’s just that there’s something weird happening with the tool/Motor6D, resulting in the tool animation not playing.

Can you show me the structure of the player with descendants showed? (Explorer tab)

I didn’t know if you were referring to the character or the player itself, but here’s both

I believe I figured out what was wrong, Part0 of the Motor6D was the Handle instead of the RightHand.