Nested SelectionGroups is fantastic as someone who’s used them a lot in recent work.

My main point of feedback is that, visually, scrolling through items in gamepad mode doesn’t look/feel so great. Typically, games that have such a feature have some padding when scrolling against the edge of the frame, so that you can see the next item in the scrolling list, but Roblox scrolls to the EXACT edge of the next item.

Having some sort of “scroll padding” option would be super beneficial for general UX in menus. 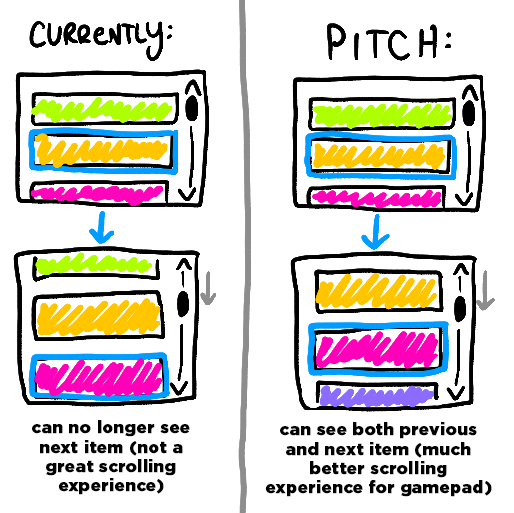 The selection box button when pressed stops the player from moving, which is indented from the looks of it, but I would like to be able to customize that.

Why do I want this to be changeable?

A bit complex to say: I am currently making a pause menu and want the game to be on Xbox. The only button that can really be used for a pause button is the selection button because Roblox already uses the menu button. The issue with using the selection button to open a pause menu is that the player could switch to a keyboard for input to exit the pause menu, and then go back to controller with the selection box being already being selected, thus disabling the controls when they should be able to move. I could provide a video example if needed.

Put short: Can we be able to control whether the selection button disables the players controls?

An Occluded Button is defined as a button that is inside the same layer collector (within the same ScreenGui, SurfaceGui or BillboardGui) and is completely covered by another GuiObject which is not transparent

True, it’s a more difficult problem to solve than it’d seem-- if a new property is out of the question, I could maybe see it based off a percentage of the ScrollingFrame’s Y size or maybe even the size of the currently selected/surrounding buttons.

Wow amazing for the selection group that relieves so much now useless code for many games!

Image Buttons seems to be broken:
Picture from an Xbox player on our game (as all xbox players currently can’t play the game) 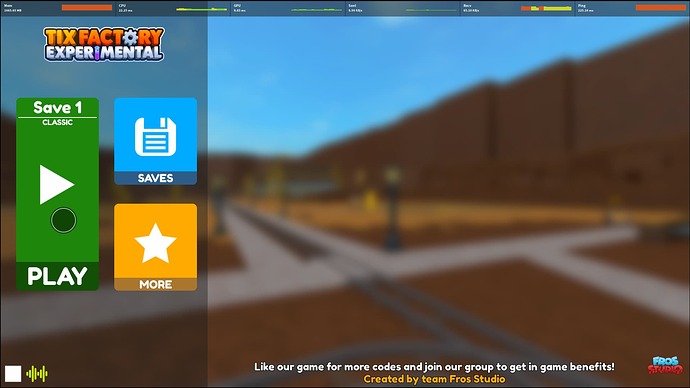 I have tested myself also within studio with a controller. And it really doesn’t react on image buttons.

To anyone experiencing this issue a temporary fix would be putting a TextButton inside the imagebutton.

Hey! Virtual cursor uses slightly different rules. Buttons with active == false will not be selected with the virtual cursor. If you set active to true, they should work again!

Can you let us know if that fixed the issue you were having?

Putting Active to true does indeed fix the problem, thank you!
Sorry for the late response, been busy.

We have a set of additional improvements to the Gamepad UI Highlight system that have been released.

This update includes improvements within the following areas:

In the image above, there is a large outer button selection. Pressing down will select the inside A button. With the A button selected, down will choose the E button outside of both.

Previously, if there was a single GuiObject on the screen, and that GuiObject disappeared (e.g. a confirmation pop up window that closes), the user would stay in UI selection mode, but there was no UI to select, so it can appear to the user as if the game is broken and the avatar can’t move. We tested an improvement to this behavior and saw player session times go up when this was active:

As always, we’d like to know what you think about these changes and whether you run into any issues in the comment section below.

Hey. I know this is more than a month old now, but I am still having issues with the gamepad UI selection. When pressing the selection box on a gamepad, mainly an Xbox controller, the players controls are disabled. This is an issue for my game as I disable and enable the player controls for multiple reasons like talking to an NPC.

I feel that having the ability to choose whether or not the players controls are disabled with the selection box would fix many issues I am currently having in my game.

Here is how I am disabling the players controls:

I used the method shown due to the announcement by Roblox: New Player Scripts are coming (10.11.18), and how you can prepare

Also, controls are seemingly enabled when switching input types. For example, when I switch to an Xbox controller, I gain my controls back. Despite the fact that I disabled them. This means that players can switch input types to break things like NPC interaction.

Hi there! To clarify, are you asking for the ability to allow players to move the selection box and their avatar at the same time? If you don’t need your players to be able to navigate UI and move their avatar simultaneously, I would try setting GuiService.SelectedObject to nil when returning control to the player. If there’s no available UI on the screen or SelectedObject is nil, we should return control automatically.

To clarify, are you asking for the ability to allow players to move the selection box and their avatar at the same time?

Yes, although it does sound weird for 99% of use cases.
The default, if there was to be a toggle for selection button changing the controls state, would be as it is now. Disabling the changing of controls with the selection box entirely would be the other option in the toggle.

My use case:
I have made a pause menu for my game, but it needs to work for Xbox. Roblox uses the normal menu button for Xbox controllers; and I don’t think Roblox has a way to disable that. I need to use another button on the Xbox controller for a pause menu and thus have used the selection button.

Edit: I am disabling and enabling controls myself after a user presses the button to leave. I guess the best way to put it is that my disabling and Roblox’s enabling is conflicting with each other.

@AykeriZero I isolated the controls scripts into a file and a game so that anyone can test it out.

Walk into the blue part on PC, that will disable your controls. After this, plug in an Xbox remote and try walking around. You should see that you have your controls back, and to this I say why?

Here is the game published if you want to try it there
https://www.roblox.com/games/9499926491/Controls-Toggle-Testing-Baseplate

Here is the file if you want to check the code and stuff out in Studio:
Controls Toggle - Testing Baseplate.rbxl (38.0 KB)

Edit: This is issue 1, the 2nd issue is that the players controls are disabled and enabled when pressing the selection button on an Xbox remote which conflicts with my disabling and enabling.

Thanks so much for the repro file! I’ve filed this issue as a bug with the playerscripts and I’ll get back to you when we have an update.

Hi there! I looked into the issue and it should be fixed now. If you’re using updated playerscripts, switching controls between keyboard and gamepad should not reenable player controls if you called ControlModule:Disable(). Please let us know if you experience any further issues!

I wasn’t exactly sure if it was a bug at first so I made a scripting help and feedback post that was turned into a bug report. Sorry for any of the confusion this might have caused.

Hey there. I am having an issue when it comes to disabling a players controls inside of a game. If the player changes input types, for example using an Xbox remote, the players controls are automatically enabled. This means that if I disable the controls, a player can bypass it and thus break many things in my game such as NPC interaction. I am using the way Roblox provided here: New Player Scripts are coming (10.11.18), and how you can prepare - #16 by AllYourBlox Here is a basic script of i…