What's wrong with my filtering script?

I was testing a script that forced a player to say something, but I still wanted the text to filter. After some tests, I finally got the script to work, but another problem came. The text was not filtering, despite being passed through TextService:GetNonChatStringForBroadcastAsync(). I don’t know what I am doing wrong. 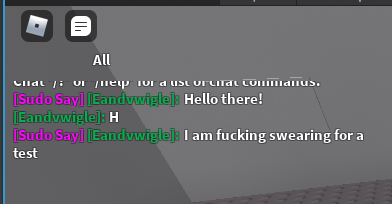 I then run the unfiltered message through TextService:FilterStringAsync, using plr as the person which the script will filter to, and giving a public chat context. It is run through a pcall, so any errors will be printed out, and the function will not continue. This filteredmessageinstance is then the value that the pcall will change. It then moves to a second pcall, which turns the instance into a filtered string. If that fails, it will not continue with the rest of a script, and print out an error. In this case, it passed both of those.

I then go on to identify the chatspeaker and finally make the chatspeaker say something. I use the filtered message that passed both pcalls in this case, and I add a tag to tell others it is not them talking directly. I still ended up with a swear word in the chat.

Any help on this would be greatly appreciated. Thanks!

Text does not filter in Studio, default chat filtering doesn’t work in studio either.

Test this in-game to see if it filters or not.

It worked. Nice to know that information now. Thank you!