So for some of my clothing assets people have been complaining the clothing they bought ‘doesn’t go in their inventory’ and I decided to invesigate it and it turns out, the clothing quite literally doesnt go on your character if you wear it 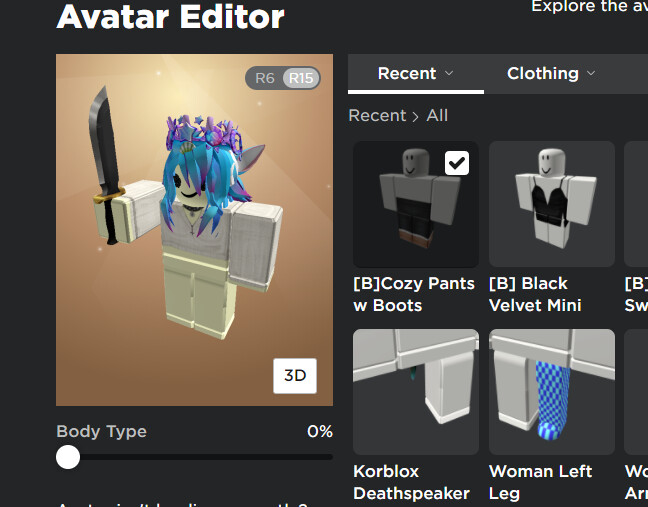 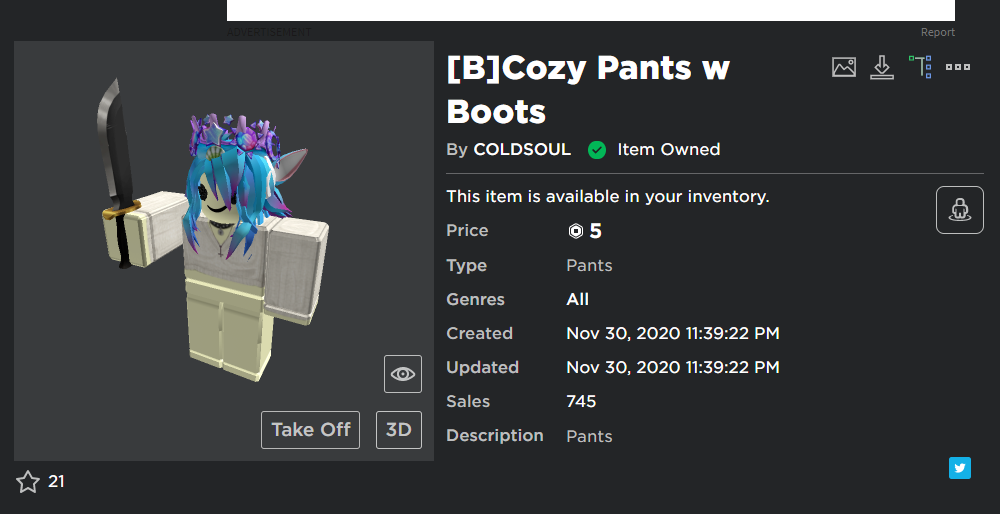 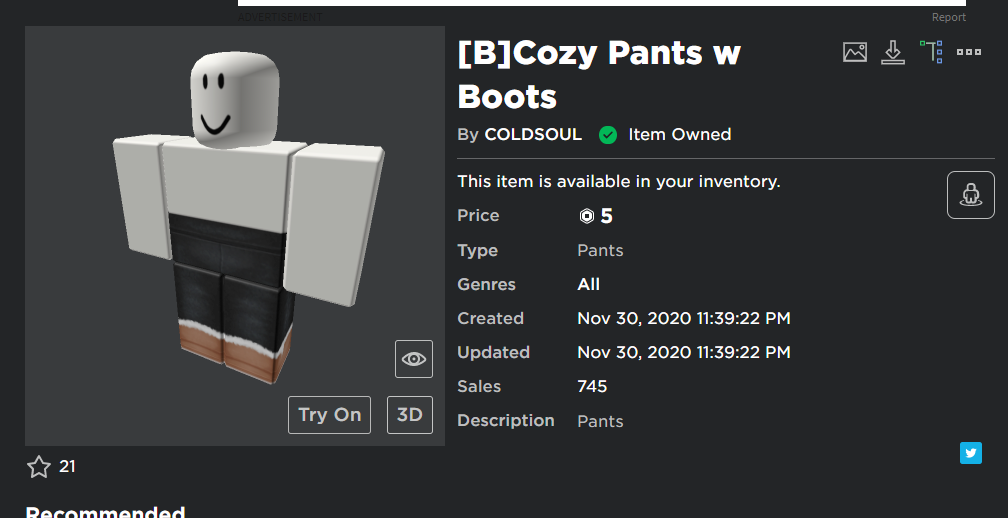 gif’s of me showing im wearing the pants and even if i reset, the pants dont show up
this is a pretty big bug because theres people accusing me of ripping them off when it’s literally a roblox bug

Edit: later found out that the texture for the pants is SOMEHOW BLANK??? 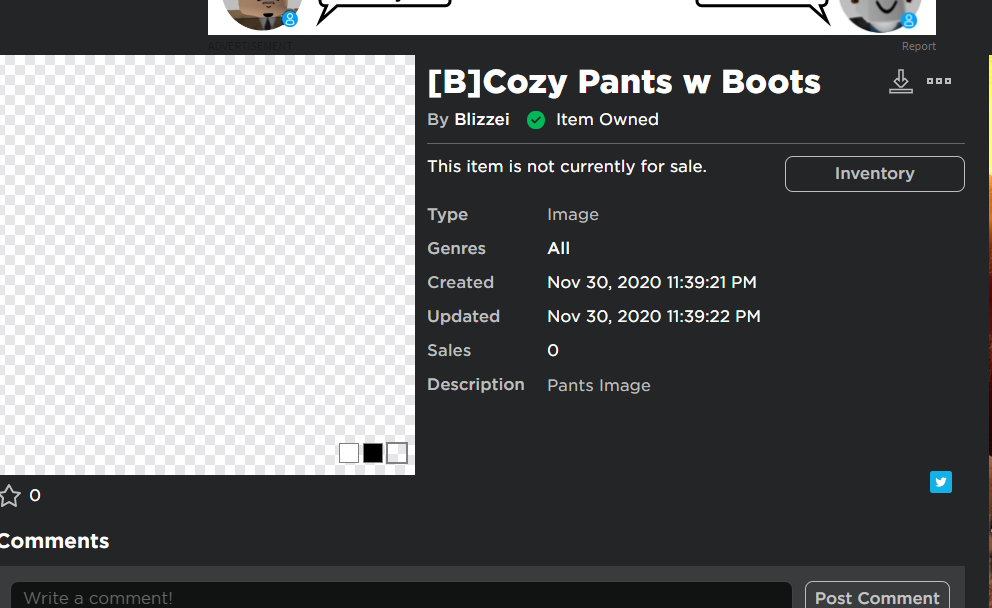 yeee its even worse when it doesnt show ingame because people think they got scammed despite it being in their inventory in shirt/pants, but cant wear it

Yes agreed! It could be seen as a scam when it’s purely an issue on Roblox’s end. I just tried on an outfit that wasn’t loading for me yesterday, and it still will not appear. One thing that seemed to help was changing my face with the outfit on, so you could try suggesting this to your customers.

Hmm, I mean you could try putting a disclaimer in the description stating that the Roblox website is having issues with loading the piece at the moment. That’s interesting though since the clothing was uploaded a couple of months ago.

i believe the items are copyright striked cause they are stolen

So happy this is happening and maybe a little bit of pain now (cause we lose some of our clothing) but this will better the whole community so huzah!
(Stop saying roblox is scamming us this is a good thing so chill yall)

Actually i am the original creator of them and recently striked down someone that copied and uploaded my ENTIRE 3 recent collections, including those pants so its a possibility that the bug is linked to the DMCA I filed recently?

This is possible, but I doubt it since I’ve been experiencing the same issue as a smaller designer. The only reason I doubt this is because you were not the one DMCA striked. The last suggestion that I have is trying to contact Roblox since it just seems to be a specific piece of clothing for you.

Part of me wants to just re upload it but this is a pants asset that has over 700 sales, it really just doesnt feel ethical to have people somehow find the new pants asset link, especially since it’s already been submitted as a customization option to wear for several games

This may be an issue stemming from how Roblox handles reuploaded assets. Basically every user created asset eg. clothing, game icon, etc that needs to be moderated has what is called a file hash. Read more about an example of file hashing here.

File hashes uniquely identify files and as such when a person reuploads one of your clothing assets, Roblox can see that the hash for the image file that was reuploaded matches the hash for your original work - this is done because Roblox is then able to immediately approve the reuploaded asset without putting it in the queue for review and approval.

When Roblox content deleted a rulebreaking asset it would also remove all associated files from the asset, resulting in the original uploader having their files deleted as well. With game icons what attackers would do is upload a malicious game file but copy a larger game’s icon. When Roblox moderation deleted the game, they also deleted the game icon and since both the attacker’s game and the original game shared the same file, the original game would have it’s icon deleted as well as can be seen here. When you DMCA reuploads of your asset it may also cause the same issue to come up as the file hashes for both your original work and the reuploaded copies are the same and when Roblox deletes the assets that are copied, they may have inadvertently removed access to the images to the buyers of your asset.

That does make sense kind of, however what doesn’t make sense is the pants is the only asset that got affected out of roughly 30 assets from the same DMCA i filed against another copy but it did make me want to check the texture of the pants by looking at its texture ID and it happens to look like this 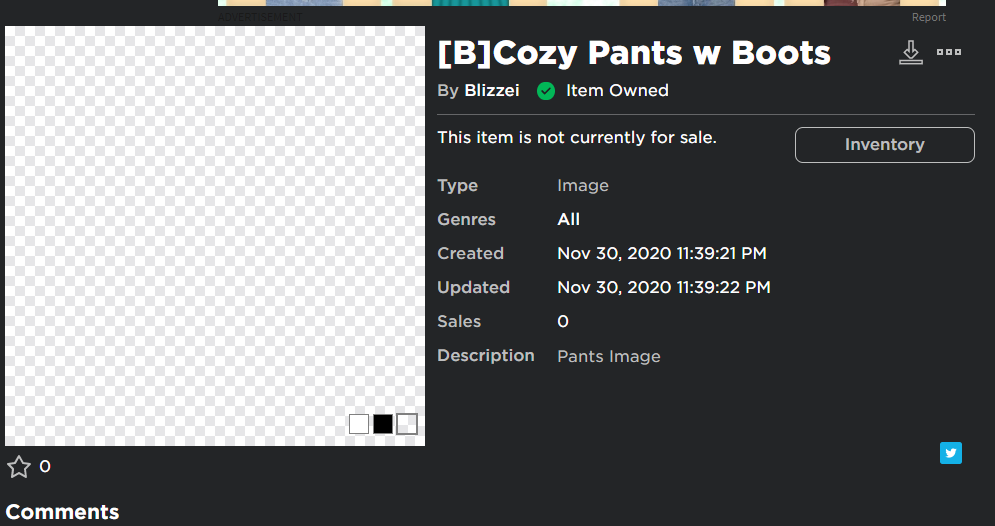 It doesnt say anything about it being deleted but the image shown is completely blank which is VERY strange, i contacted roblox support and roblox didnt really say much bout it but an automated message

I’ve been having this issue it’s so annoying out of like my 50 pair of pants only 2 of them show up visible now? Roblox shouldn’t be trying to steal my pants like this and it’s very weird and annoying.