Having all of the follow possibilities be one icon, I feel, is more redundant than the old way. In honesty I’d always have preferred the icon for them following you to be an arrow on the shield pointing away from the playericon. You follow them to be the arrow pointing inward. And then mutual be blue shield.

Would’ve given you more information to go off of and it’d be more universally readable that way. Now you can’t tell what’s what by grouping all states of following into one icon.

Also removing the pending FR Icon is a bold strategy. If you miss out on the notification you may not know that someone sent a FR to you until you leave and see it in your pending FRs on the website.

I believe this is because the PlayerPermissionsModule (which handles stuff like admin or video star icon) has to be above other icons.

I recommend let the player choose the color of your name on the leaderboard instead of standard yellow.

removing the pending FR Icon is a bold strategy. If you miss out on the notification you may not know that someone sent a FR

The relevant icon that was removed is for friend requests that you have sent. The icon for a pending received friend request has not been removed.

How to rank up on the Roblox Developer Forum

Will we ever get a badge or title on the main website to show off our forum rank?

No, all forum ranks are exclusive to this forum. It is not planned (and will likely never be planned) to have any sort of official recognition of forum rank on the main website; not in the form of hats, nor profile badges, etc. Please do not treat your developer forum membership as any sort of endorsement from Roblox about your development skills, and please do not view the forum community as an elite club, as it is not.

I think this might be a good change! I think redesigning the icons in my opinion would be great!

Will it cause more or less lag for players on low performance pcs?

Its Wednesday and the change still did not roll out. I am on iPhone 8 Plus and I cannot see the player list in a game.

It is also Wednesday day for me and the update does not appear to have been released; I’m on Desktop, Windows 10. I assume it will be released later today.

(Verified this by looking at my name on the players list; it is not gold, like in the demo video)

This has recently been pushed to studio but has caused a catastrophic error which results in NO corescripts loading correctly. 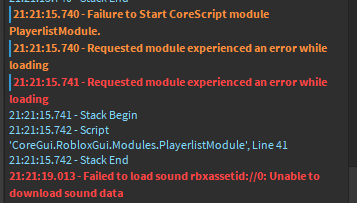 EDIT: Issue was resolved by forcing studio to reupdate a few hours after original release

Not a fan of the highlight mouse just because the player list has line in between everything that makes it go back and fourth between the two which hurts my eyes going from a nice black to a bright and sharp white.

Great ideas here. We aim to provide more customization for Roblox supplied game features such as chat, player list, etc. Can’t give any time estimates on this yet though.

Good point, agree that VIP type of elite status within an individual game is a strong use case.

Hopefully you aren’t blocking influencers. If you are blocking one, would be good for us to know why!

A lot of influencers help market Roblox games and I would support them as a whole. Once in a while we get some bad behavior from a developer, but that shouldn’t lead me to assume all developers are doing bad things, right?

Sorry, mobile is coming at a later date, after we update the presentation of the UI.

I don’t personally have one blocked, but if I did (and it was personal and not an issue Roblox should be involved in), why should their icon show above the blocked icon? Your answer doesn’t really address that point and instead just mentions what influencers actually do for the platform.

One could even question if it’s worth having Blocked be below Roblox staff or the game owner for the same reason, though there are actual arguments to be made in favor of always showing the staff icons and it could be reasonably important to know who the game owner is even if you have them blocked (sometimes I join games without looking at who made them).

But I’m not so sure about influencers. In the case where you have a personal dispute with someone that doesn’t relate to them as an influencer, and you want to block them, the block icon seems like the one you would prefer since it provides more relevant information.

This isn’t about supporting or condemning influencers, it’s just questioning why a decision was made.

As an aside though, there’s been a multitude of videos put out by Stars members that would make me hesitate to associate with them for personal reasons (I don’t like their behavior as content creators). Some of them even break the Terms of Service, so that would also be a red flag for me working with them. I believe they’ve been reported elsewhere on the forum though so I’ll leave it at that.

I disagree with this.

Hopefully you aren’t blocking influencers. If you are blocking one, would be good for us to know why!

Being an “influencer”, doesn’t exclude you from your actions and behaviors. So much so throughout the years, I have personally blocked influencers from Roblox and other social media.

If their actions, thoughts and words are something I seriously disagree on, for example the exploitation of children for money, I do not wish to ever put me or my brand near that person, I’m happy to take the ethical route if it means it’ll take me a bit longer to meet my goals.

China helps Roblox games, it doesn’t mean China is a great country and their actions should be ignored because of their value.

Once in a while we get some bad behavior from a developer, but that shouldn’t lead me to assume all developers are doing bad things, right?

There are plenty of influencers and developers who do great things, to suggest that they’re bad because these people are bad is completely misguided.

Is there an API or an easy way to check this? If not do you have any plans to add one in the future, like when you check membership type? I am aware that the chance a Roblox Admin joining is pretty small so it’s really not a big deal, but I thought it would be fun to complete it with admin icons too.

We check this by checking who is in the Roblox Admin group too. Here are the three group checks we use for icons.

It will be also good to change owner icon, because it looks like badge.

That is actually something I have seen them do Before. But it was put right back to normal probably because it looked like the admin one. They did make it the studio logo for like 20 minutes then put the old one back. I do agree with you though that icon Should be changed.