I’ve noticed that I’ve been posting around the link for the CoreScripts repository many times, so I’ve decided to create a resource thread regarding it. This allows for link exposure and future usage, without the hassle of digging up a thread that references it. 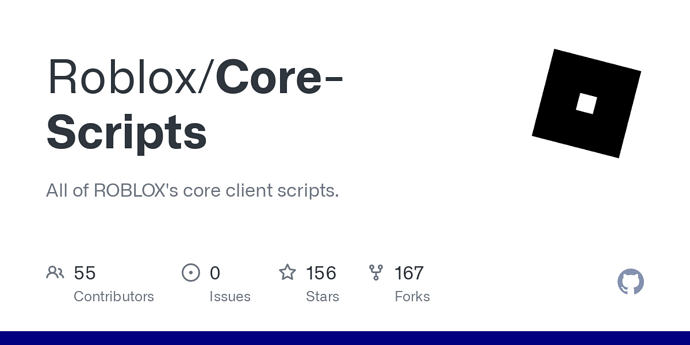 All of ROBLOX's core client scripts. Contribute to Roblox/Core-Scripts development by creating an account on GitHub.

The following GitHub repository contains Roblox’s core client scripts. Here, you can view the source code for some of the CoreScripts that are inserted into the client at run time.

You may notice that you have some experience working with these scripts. For example, you may have forked the PlayerModule to access a CameraScript module in order to access the PopperCam to add a custom whitelist. In doing so, you’re forking a script that was inserted from this repository. Another example is using RemoveDefaultLoadingScreen. You’re not directly interacting with CoreScripts but you’re using a method exposed by them to modify something they made.

An automated repository that extracts and displays information about the current version of Roblox. Most of the information is miscellaneous, but it provides insight to changes that are being made ...

In addition, you are also able to view the files via your local file system. The path may look differently for some users, however I can provide the Windows path: %appdata%\..\Local\Roblox\Versions\{LATEST-STUDIO-VERSION}\content\scripts

For veteran developers and those who can infer the meaning of various directories, exploring through this repository should be a breeze. For those who aren’t as experienced or need some guidance, I can provide a brief rundown of what you can expect to find and the purpose of each item.

Most or all CoreScripts are self explanatory, given their naming and brief documentation in comments around the script, especially the abstract at the top of each script.

The exploration section is written for the latest commit on the master branch (August 13th, 2018). Please keep in mind that this commit was made nearly a year ago and does not accurately reflect the current version of the CoreScripts at all - there are some very noticeable differences.

The point of showing the repository is allowing you to browse code.

CoreScriptsRoot is the first of the two top-level directories in the CoreScripts repository. This directory primarily contains the client CoreScripts you see for various controls, such as core UIs. You will never really find yourself having to access any of the code from this folder.

Relatively self explanatory. The scripts in this folder contain code used as the contents of CoreScripts. Each of their functions are explained by the name of the script. There are two exceptions however, to which their name may not immediately explain their purpose:

Example code for sending out a notification:

The libraries under here are used with the deprecated function LoadLibrary. You are still able to use LoadLibrary as well as the libraries without issue or error, though the libraries and their methods are recognised as deprecated. You’re encouraged to create your own libraries.

The modules folder contains an assortment of modules with code that can be reused or expose various functionality to other CoreScripts. This is another folder that you won’t find really find yourself looking through. There’s of course inspiration, salvaging, getting inspiration for something you’re making or just out of curiosity.

This directory contains seven folders, each of which expand out into more modules or folders. Some folders may contain useful content (such as a handy BarGraph pseudoclass under Stats) for developers who know how to extract, modify and use these modules (it’s usually just as simple as copying the source code and posting it into a ModuleScript).

The Server folder, to note, does contain parts of the previously mentioned Lua Chat System, under the ClientChat and ServerChat modules. You’ll notice similar folders being mirrored while you fork the chat system through the Play Solo → Copy method.

Other than that, there are around 23 modules in this folder. I won’t be running through any of them as I haven’t had time to explore them myself, though the documentation and names of the scripts should suffice in helping you understand. If that doesn’t work, feel free to ask questions.

ServerCoreScripts is essentially the CoreScripts folder, however it relates to the server. There is only a single script within this folder, ServerSocialScript, which handles server-side logic for social interactions.

PlayerScripts is the second top-level directory in the CoreScripts repository. This mainly pertains to scripts that you see inserted into each respective container under StarterPlayer. This is the directory you may find yourself searching through, directly on GitHub or indirectly by using the Play Solo → Copy fork method especially for the PlayerModule.

This directory matches the name of StarterPlayer.StarterCharacterScripts in the Studio Explorer menu, given the scripts here are placed inside that folder when the server starts initially. Currently, this folder only contains the script for character sounds.

This directory contains the old modules used in StarterPlayerScripts, when CameraModule and ControlModule were separate. Although you can still salvage these items, it’s recommended that you use the new structure instead, as it is actively supported. It also has better, efficient and centralised features to use over the former two-branch structure.

Note - this folder does NOT actually contain the new structure. The fork from a Play Solo session is more accurate. This one still uses two modules, while the current version uses one module to unify the two and act as a helper.

This folder contains the source code for the current PlayerScripts structure. PlayerModule is inserted into StarterPlayerScripts, which is a singleton that loads in both the camera and control modules under it respectively. It is initialised by a LocalScript that requires the module eagerly on start-up.

The PlayerModule is designed in a pseudoclass-like fashion, which exposes methods for allowing you to use certain exposed methods of the camera and control modules without directly trying to index them.

I’m not well-versed in this topic, I just happened to write this entire thread on a whim with several free hours after two exams. I don’t quite know if the information here is accurate or helpful and it drifted off towards the end particularly because there wasn’t much to say once all the important items were out of the way.

If there’s anything I’m misinformed of, have gotten incorrect, any questions or feedback in general, please do leave a response or drop me a direct message. I’ll try to address anything that’s dropped off within a timely manner, considering I’m hanging around here on a daily basis.

Thank you for reading if you did and good luck with your development.

It’s nice to have a place where I can quickly refer to the CoreScripts so I can enhance my programming/coding knowledge anytime.

Also, to add on, the MergeSort.lua module quickly (and efficiently) sorts an array and returns it.

EDIT: I do not think the return statement actually returns a function. There may be something wrong with it but I do not know.

Woah, this was a rich source of information. I have read this entire post without leaving a single line. Thank you very much and putting effort into this. Hope you have a wonderful day.

I had a look into MergeSort. It does indeed seem to sort an array and return it, though the script itself (which is a module) does in fact return a function, the mergesort function. This way, when MergeSort is required, it can be called and return the sorted table.

I’d assume it works similarly to sort from the standard table library, though obviously different if there’s the need to create this module for later usage.

Hmm. Interesting.
By the way, the comparison argument/parameter (comp in the MergeSort module) works just like table.sort(). Try returning A < B in the comparison function, which causes an array of numbers to be sorted in ascending order.
Also, can you update the original post with this new info?

A quick note: this repo is not being kept up to date (the last commit was almost a year ago). If you want a more accurate picture of CoreScripts, you can go look at content/scripts in the most recent studio version folder on your harddrive or go to @CloneTrooper1019’s Client Tracker, which hosts an up-to-date version of that folder.

An automated repository that extracts and displays information about the current version of Roblox. Most of the information is miscellaneous, but it provides insight to changes that are being made ...

@starlebVerse I’ve updated the main post including this information now.

@Dekkonot Thanks for pointing that out! I will also include this link in the main thread, as well as the pointer towards the scripts folder on the local file system. When I get the chance, I’ll update the post to refer to an updated copy of the CoreScripts repository and it’s code.

I may just base the thread around commits made to that repository in general.

I’m not quite sure why it’s structured this way, though I also don’t know if any CoreScripts currently use mergesort so it’s difficult to gain an understanding of how it’s used in code.

I got an answer from @mrow_pizza.

this module is written like a command-line script; you can't use it in Roblox in this form it's used to implement the Custom sort order for UI layouts

I’ve added this to the main post. Thank you for sharing this information.

Where is the "Animate” local script that is normally found inside a players character?

The Animate LocalScript does not live in this repository. It is likely held somewhere else internally that is inaccessible to developers.

I don’t think this resource has much utility to developers and I can’t fully remember why I created it, maybe it was just to highlight where you could find the CoreScripts if you wanted to peek at something from it. I’ll think about revising or repurposing this.