Here is a beginners guide to understanding and using CFrames. CFrames are super important and useful for any form of positioning and orienting of things in the workspace, so I hope this will help you with things like camera manipulation, even if you aren’t too good with the math involved.

CFrame stands for ‘Coordinate Frame’, and this is a mathematical tool we use whenever we want to specify how something is positioned in space. A coordinate frame is made up of a point in space called the origin, and a set of 3 perpendicular directions called the axes (singular: ‘axis’). We usually name these 3 directions x, y, and z. 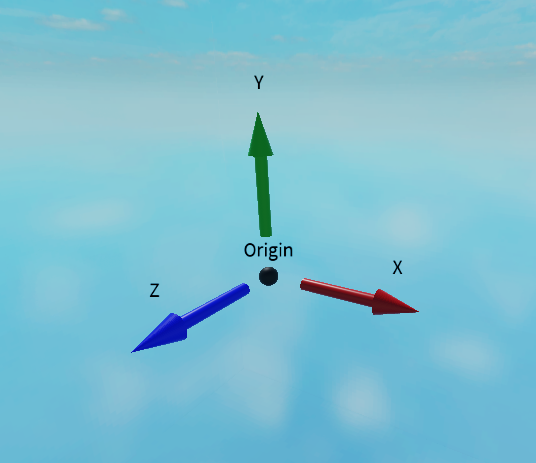 (Here is a visual representation of a coordinate frame. In reality they are purely mathematical) 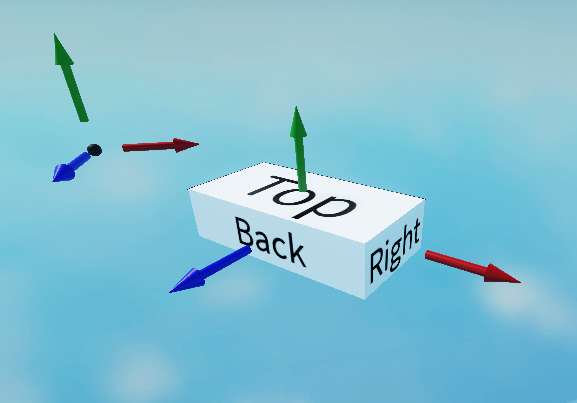 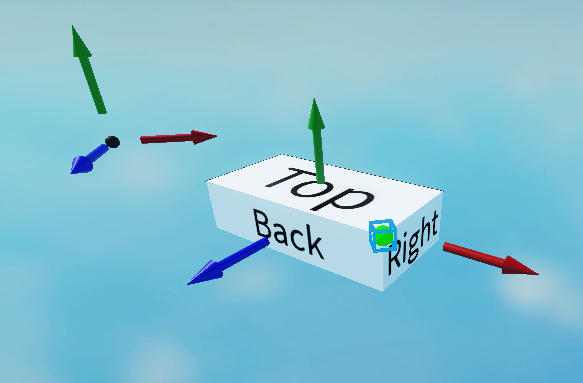 With respect to the Part:

With respect to the Workspace:

As of now, we have been talking about coordinate frames in the mathematical sense. But what is the meaning behind the actual CFrame property of an Instance? (I know, all this reading and we still haven’t talked about CFrames themselves

but don’t worry, that was most of the learning: the rest is just understanding how to manipulate CFrames in code)

CFrame as a property of instances

If you have looked up CFrames before, you have probably seen that they are specified by 12 numbers. That may seem overwhelming at first, but its actually very simple: 3 numbers for the position of the origin of the coordinate frame, 3 for the direction vector of the x axis, 3 for the direction vector of the y axis, and 3 for the direction vector of the z axis (all with respect to the Workspace coordinate frame). That’s all. A Part positioned at the origin of the Workspace with the default orientation will have the 12 numbers of it’s CFrame consisting of (0,0,0), (1,0,0), (0,1,0), (0,0,1). That is to say, it’s coordinate frame’s origin is at the workspace origin, and its x, y, and z axes point parallel with the workspace’s x, y, and z axes respectively.

So why and how do you use CFrames? There are 2 main reasons you would want to use CFrames:

This relates back to what I said earlier: the details of a part’s coordinate frame completely define the parts position and orientation in space (this goes for anything with a CFrame, including cameras). We can use this fact to easily code how we want things placed in the workspace. Using CFrames, along with their pre-defined functions that Roblox gives us, we can do things like both position and direct a Camera in only a couple lines of code: 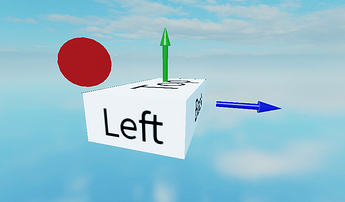 In fact, it’s very rare that you will have to define a CFrame using 12 numbers. Most of the time you will use constructors like this one or manipulate pre-existing CFrames of other instances.

2. CFrames make it easy to position and orient things relative to other things

Let’s say I wanted I had one part called part1 and I wanted it to be positioned 5 units on top of another part called part2. The problem is that the Position property of a part is with respect to the workspace, so we can’t just set it to 0,5,0. This may be easy to fix with vectors if part2 is nicely oriented in space: part1.Position = part2.Position + Vector3.new(0,5,0), but what if part2 is rotated beyond comprehension

, and it’s top face isn’t nice enough to be directed along the y axis of the workspace (or any of the 3 axes for that matter)? Fear not, this is the mathematical purpose of coordinate frames after all. We know the position we want for part1 in the coordinate frame of part2, we just need to convert that to the position in the workspace frame. We can use the handy function CFrame:PointToWorldSpace(Vector3). This takes the position of a point in space specified with respect to the CFrame, and converts it to the position with respect to the workspace:
part1.Position = part2.CFrame:PointToWorldSpace(Vector3.new(0,5,0)) does the trick for us.

Next I’ll talk a bit about some of the properties and particularly useful functions of CFrames and how to use them.

A quick rundown of some CFrame properties, functions and operations

This page lists everything + more that I’m about to talk about, but I’ll try go a bit more into detail than it does.

Check this out for a more in depth discussion on CFrame operations.

I hope this guide wasn’t too long or confusing, but I also hope that it was in depth enough so that you came out with enough of an understanding of CFrames that you had the tools to do most of the things you would need them for, and so that you can look at the API page without the confusion about what any of it means.

Let me know if you have any suggestions or questions. Thanks for reading

Absolutely outstanding tutorial! This explains CFrames very well, and you did a great job at explaining this! Very in-depth and very well-written. Keep it up, you have done amazing.

I am completely new to CFrames! This helped a lot! Thanks! Keep up the great work!

I finally pushed myself to start learning LUA and this is a great tutorial! I personally still am reading through, but its really well formatted!

That can help me a lot thanks

thank you for this help it will be greatly useful to me continue like this.