Reproduction Steps
Currently, as of 3/28/22, the Emerald Claw : The Envious and the
Crimson Claw : The Vengeful bundles have serious problems with their wings.

The Emerald Claw package has massive wings (as it should), but its hitbox is massive. This results in the package being able to fling other players around, not being able to walk through doorways, and more. The Crimson Claw had the exact same size wings as the Emerald Claw used to, meaning it had the same hitbox issues. Roblox, in an attempt to fix this, simply ruined the wings by shrinking them: 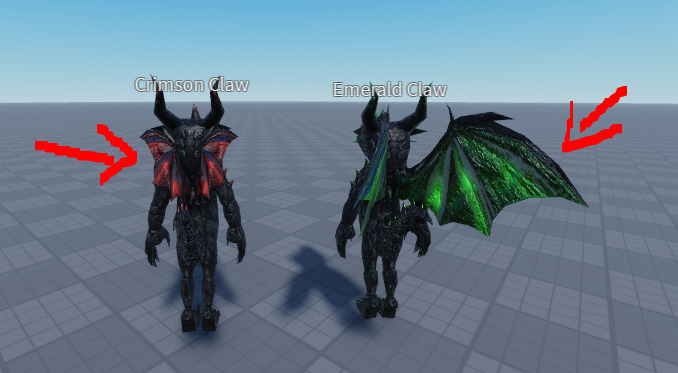 This is obviously not a proper solution! It ruins the look of the avatar, and doesn’t actually solve the hitbox problem. These bundles should be able to have their large wings, while also having the wings not be collidable!

At first glance, the solution to this problem would seem to be “just make the wings accessories!”. However, in a large post I made, I outlined why that approach is problematic to game developers (instead of contextual clipping, one could imagine contextual hitboxes)
As such, avatar bundles (both Roblox-made and UGC) need a way to specify which parts of the mesh geometry do not have collisions and which do. This way, bundles can have things such as large wings without needing to worry about hitbox problems!

EDIT : After discussion with internal folks on the avatar team, the solution here is indeed, to make the wings big & split them off into a back accessory.

Expected Behavior
It is expected that bundles with large “extra” body limbs would be able to be large, without incurring a huge hitbox penalty. OR, the extra body limbs should be split off into relevant accessories.

Actual Behavior
Bundles with large “extra” body limbs either have large hitbox issues, or get shrunk by Roblox (ruining the appearance) as a quick patch.