A permanent ban is not appropriate for a first time troller.

Then what is? If their intent was to troll in the first place, they should be removed completely for disregarding forum rules and etiquette, especially since they know they are trolling for the sole purpose of punishment.

Warning, several days suspension. AKA what it is right now is appropriate.

Clearly what is in place now doesn’t work, if it did, we wouldn’t be having this conversation right now.

Banning users doesn’t solve anything. If your talking about preventing troll posts, you need to be considering other measures like a exam of rules, etc. What your suggesting is disciplinary action, which only helps after it’s happened.

Surely the trollers already know that what they’re posting isn’t allowed on the forum in the first place, pretty sure that’s what trollers are supposed to do 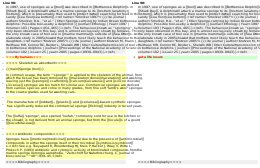 In Internet slang, a troll is a person who posts inflammatory, insincere, digressive, extraneous, or off-topic messages in an online community (such as social media (Twitter, Facebook, Instagram, etc.), a newsgroup, forum, chat room, online video game, or blog), with the intent of provoking readers into displaying emotional responses, or manipulating others' perception. This is typically for the troll's amusement, or to achieve a specific result such as disrupting a rival's online activitie B...

If you are referring to people who unknowingly post without malicious intent, then that is a different story.

If you are referring to people who unknowingly post without malicious intent, then that is a different story.

That’s the issue, you can’t distinguish who’s doing it knowingly and unknowingly and enforcing a permanent ban policy on all of them regardless doesn’t help.

So let’s say one post is spamming racial slurs and another is asking for support from Roblox staff on their account which was recently compromised. What’s the difference?

but the answer isn’t an instant ban hammer.

I agree, except in the case of blatant trolling. I think a one year posting ban will allow users to mature without permanently locking them out of a valuable resource. For minor rule breaking posts (didn’t research before posting/obvious duplicate posts, using the development discussion area for a lounge, etc) there needs to be more enforcement, but much smaller penalties. I think a lot of the issues come from different users that see and learn from others that it is okay and normal to post haphazardly. But that’s another matter off topic to this thread.

There’s this category for Regulars

That not everyone’s allowed to use…

It isn’t made clear enough and that is what the OP is talking about. The action given to trollers is minor, so they don’t learn from that mistake. This causes troll posts too be more frequent on here. Trolling should have a immediate ban that could be appealed if their case stands strong. I really don’t know why you are semi-supporting trollers since they know what they are doing and that it isn’t allowed. Sometimes you just have to give a hard punishment to straighten up something.

I don’t see the point of arguing with false information. It isn’t very convincing.

I’m not defending trolling by any means so don’t put words in my mouth. What I’ve been saying over and over is the punishment has to match the crime. Trolling is bad, yes, that’s why it has the second highest punishment possible (suspension) but it isn’t instant ban worthy. Trolling is a very vague word that can be used to describe so many things, I can see a lot of false bans if a change like this is made.

Trolling should have a immediate ban that could be appealed if their case stands strong.

I see many complaining about the ineffectiveness of moderation, so yeah… I can see people disagreeing with this part.

I agree with the general sentiment expressed here but I’ve also seen people being taken as “trolling” for showing their first time doing something when they had no intention of trolling. Do they deserved to be permanently suspended?

I want to allow troll posts as long as it has effort into it (like an extremely absurd gfx but with lots of effort put into it.)

This is a serious forum. There is no place for that sort of thing here. That’s a complete waste of space.

I don’t believe that was intended as a joke, it just turned out to be hilarious.

Could be wrong however.

Exactly the point then.

Banning users doesn’t solve anything. If your talking about preventing troll posts, you need to be considering other measures like a exam of rules, etc. What your suggesting is disciplinary action, which only helps after it’s happened.

Three-strike system doesn’t seem to work right now; as when they are suspended for a few days they just get bored and go to another alt before their time is up. It’s sad what happened to the Frozen guy-I’m pretty sure his account got “hacked into” somehow.

No they don’t, but people who make troll posts? Depending on severity, yes, because we can’t continue having recurrences of sh**posts in DD, since the category is already bad enough.

What I believe @FxllenCode meant by

This is a serious forum. There is no place for that sort of thing here. That’s a complete waste of space.

was that the forum is supposed to be serious and professional and not a variety of posts that are only intended to troll and not use the forum properly. If I’m right, it does not imply that only realistic builds are allowed - what would be a waste of space is for example the among us thread or some other ones spamming racial slurs which, obviously, are troll topics. Over to builds however, this comes back to how it is hard to tell if somebody is not trolling and genuinely asking for feedback.
It’s kind of a stab in the dark really to determine if it’s a troll post; with posts made only intended to troll can get mixed with real posts and thus, they get punished.

It’s generally what @Blackmole111 is explaining: it is really a grey area of what to call a troll post or a real post.

I completely agree with this point, as if trolls were instantly banned then a large amount of people would leave roblox do to the overstrict rules, while also I could see people spamming posts just to say that the " 0 tollerance for trolling" should be changed, it may prove to be difficult for new developers to the forum that don’t know exactly what might be considered trolling and end up being instaint banned. To be honest, I think an exam would be a good way to discipline trollers. though, if a troller needed to write an exam they could just cheat answers and not spend any time reading them at all.

I am not a troll, and I agree with you.

but it is also difficult, how do you publish things in the correct topic? literally, today I got that my post was deleted because it violated the rules.

And my intention was not bad, if not to know what other people thought about a subject.
ah, but it’s off topic, :ban:

This gets into the problem about how Development Discussion has too much ‘not knowing where to post’ type of topics, which with this reply if we keep talking about it, would go off topic of this thread. The category simply is vague and doesn’t specify what is considered Development Discussion.

What the community needs to know is that whenever these trolling incidents happen, they are not always in #development-discussion. The one today was mostly in Cool Creations and there were some in Scripting Support and Development Discussion.

The good news is that almost every time after someone trolls and spams the forum, they get the three strike suspension which means the moderators are doing their best to stop people from spamming the DevForum.

Yeah? So what if the trollers change channels. It should be normal to post in different topics.

But as we said, sometimes a ban right off the bat isn’t the best choice.