Nope, banning someone who joins the forum and immediately spams slurs/NSFW/whatever else is absolutely the right choice.

Makes sense, but what do you expect mods to do. They are usually slow to things. For example, there has been a new “pokemon brick bronze” game open for a few days with like 4k players and hasnt been taken down. Mods can’t prevent it from happening aswell as people will just make alts.

So what if the trollers change channels. It should be normal to post in different topics.

This is what it looked like from my New tab: 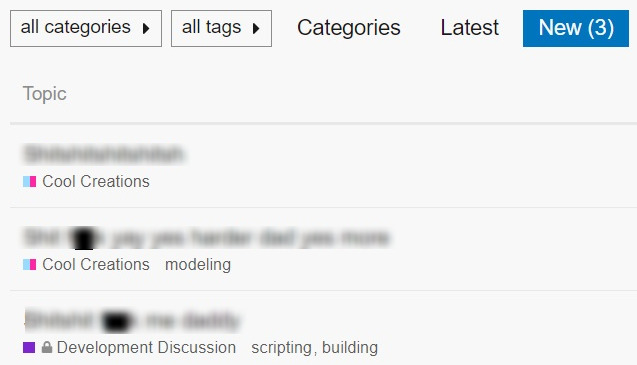 They tend to stay in one category but they sometimes post in different categories. #development-discussion is almost always targeted but categories in #help-and-feedback is also targeted sometimes.

For example, there has been a new “pokemon brick bronze” game open for a few days with like 4k players

What does this have to do with the current topic? This is a completely different situation on a completely different, non-developer side of the platform. Mods are actually really fast on the DevForum and any NSFW topic is flagged to oblivion within twenty seconds, and the person who posted it gets three strikes in less than half an hour.

I want to allow troll posts as long as it has effort into it (like an extremely absurd gfx but with lots of effort put into it.)

People should know in the first place that this is a serious forum, and no matter how much effort is put into trolling, is not allowed.

But I think it is way to harsh to ban someone for trolling a little.

This is a forum, not a playground. You are not supposed to be trolling in the first place.

This isn’t a professional forum, it’s the development forum for a online game platform.

Users should at least read the rules before they start posting. Letting trollers run free will just clog up the categories with spam and troll posts.

So perm banning someone who makes a thread like this would be kinda cruel tbh.

But why should this be tolerated? This is a developer forum, and has no place for trolling such as this. The user knew what they were doing. It wasn’t an accident.

Well, I’m not saying he shouldn’t be banned. Maybe a week-long punishment is suitable for that kind of thing.

I’m just stating that a permban is overkill for someone who didn’t even spam slurs or whatever.

Because there’s defiantly been threads that were a hundred times worse.

Oof, I just realized that you already referenced the week-long ban in the thread.

I get that it’s been a rough year for the DevForum, especially since Roblox hasn’t said anything about the problem since Summer 2020.

But you have to understand that the problem we’re going through right now is normal for every social platform as it grows popular.

I can see why you’d think that instant banning anyone who makes an off topic post would be a perfect solution, but it’s really not.

One of the main reasons why all these troll posts are happening because the moderation team for DevForum is heavily understaffed.

According to the groups tab on DevForum, only 25 Roblox Staff moderate the DevForum. 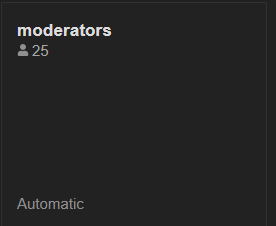 And I assume there’s 8-10 posters with the Leader role who also moderate the DevForum in their free time.

35 people is not enough to moderate a forum with over 5 thousand users.

A team like this would be perfect if it was 2019, but there’s been changes and now people are joining the DevForum in massive amounts.

It wouldn’t really surprise me if the total count for DevForum users was over the 10 thousand range in the next 2 years.

Yes, we can make the rules tighter and the punishments harsher.

But that’s really not gonna do anything once the player count grows to the point where it overworks the 35 people that moderate the DevForum.

We’ve already seen this happen with the Post Approval team, the amount of posts overworked everyone in it to the point where the whole program failed.

If the DevForum moderation team doesn’t grow within the next 2-3 years, the same thing is gonna happen to them.

We can make all the suggestions we want to stop the problem, but the problem will never truly go away unless Roblox uses money to hire more people to moderate the DevForum.

Banning people who make off topic posts instantly would help a little, but it just won’t be enough as time goes by.

If you read my other posts, you’d see that my point wasn’t to let trollers run free. But banning them instantly over the current strike system is too harsh for first time offenses.

According to the site statistics, there are over 100K users in the last 30 days and over 550K users overall.

I think strict rules can work if done well, but you also need people to enforce those rules also.

So I still think Roblox should put more resources into DevForum, that way we can see things improve.

I do agree with a lot of your points here, but instant banning is still a bit much in my eyes as that would demotivate inexperienced developers and encourage people to use alts more often.

Plus it would probably encourage trollers to make more inappropriate threads than before, because there wouldn’t be any point in making troll posts that are PG if you’re gonna be instantly banned anyway.

I think maybe a 2-strike or a 3-strike system is a better option tbh.

Then it should be a week, but if it’s something like this:

Then it should be permanent.

So essentially, any user who, whether intentionally or unintentionally, creates a post that falls under the vague and arbitrary criteria for a “troll post” gets instantly permanently banned without warning?

Yeah that’s gonna be a no from me dawg, sorry

That’s not what we were saying. A post that would result in a permanent suspension would be the racism example I posted (just so you know the picture doesn’t show the whole post). It was intentionally created to make people upset and the account that made it was a throwaway account created in July.

The rickroll example I showed was not offensive, but it was spam, and it was unnecessary. The person posting it probably didn’t know that you weren’t allowed to make topics to rickroll people (and it was April 1st). I said that this type of post should result in a moderate punishment since the DevForum is NOT called MemeForum. You can clearly see the Dev in DevForum, because this forum is intended for developers, and any kind of nonsense should not be tolerated.

I was responding to OP.

OP doesn’t give specifics on what constitutes a troll post, and claims that creators of all troll posts should be removed from the forum, no questions asked.

Yes, I fully agree. These trolls are only interested in gaining publicity and likes. There are some topics that illustrate how spam posts (for example, This is a wonderful update!) are made just to get likes. Removing them from the dev forum, on the other hand, is a little cruel. The Developer forum team has a sanction for these trolls as stated in this post under the offical rules of the Roblox Developer Forum.

I personally find troll posts hilarious. But, I do tend to have a good sense of humor, and I tend to understand most jokes. Now, with programming, there is a large collective of introverted people, or others that lack a lot of communication skills. This kind of thing can really throw people off and may negatively affect aspiring developers.

I am in full support of your proposal, maybe a hidden joke in a (helpful) response would work, but trolling alone should have a zero tolerance policy.

This is a forums about improvement and ultimately support with development. The Roblox forums were taken down, but that was the place to mess around on, not the devforums.

It’s not hard to ignore it

Other “professional” forums are also full of rubbish, it’s the nature of an open communication platform. Most people on here are very young

I don’t see why that means we shouldn’t punish users purposefully acting up.

You can waste time and resources banning random people (maybe just making them more keen to troll you in the process), dealing with appeals, etc.

Or you can just trust that people won’t be crappy, delete dumb posts when you see them, and since this is apparently now a “professional” forum, enjoy the fact that developers who post a bunch of nonsense won’t be taken seriously by anybody anyway. So if anyone actually suffers from this, it’s them.

I saw that thread too, it was just unlisted now.
This is getting a bit excessive, how come this only picked up recently

It’s because of the attention the among us post got. People are now realizing they can take advantage of the moderation (or lack of in some cases). The user in question, who was obviously trolling, was not suspended…