Hello devs!
Let’s get straight into it.

The biggest update is the release!

They look much better!

I tweaked the colors a bit, again.

I made some blocks more thin, so they take up less space. 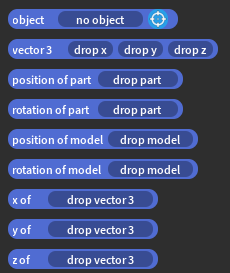 Of course, I was focusing on the release so I fixed some bugs and disabled test features.

I suggest to get the plugin while it’s free, you should not miss that!
Please mind it’s in beta, so it lacks some features and has bugs.

Tagged people:
All of you were tagged in the release post

Have a good day!

Thanks for making this free for small devs like me
How long will this be free for?

Other than that this is a very useful plugin in my opinion
I haven’t tried it yet, I might though

Quick thing - if I press the eventblocks icon in the plugins bar then the plugin simply doesn’t appear - it only appears if I restart studio.

I also opened a script, I created one and the editor didn’t appear. I’ll restart studio and have another go

Edit: I’ll also see the video, might be doing something wrong!

EDIT2: Yep, forgot about the side thing.