Is there a way to get the lighting effects of one skybox but actually show another?

If you want a large repository of skyboxes to test with, you can use

I just released this plugin which is basically just a library of skyboxes that are only HD and not duplicates of another skybox in the library. This should save you a lot of time from having to filter through garbage skyboxes and the many, many duplicates in free models by hand. I’m still adding to the library (HD skyboxes on ROBLOX aren’t as numerous as I would have hoped though), so it will grow in size over time. The plugin allows you to search by name and preset tags(separate words by comma…

which provides a large catalog of skyboxes. You can search for them by color as well!

Awesome, just to clarify does this mean the PBR feature is now in the main version of studio? And if so does it work in game.
Sorry for asking I’m not able to use my laptop at the moment.

I played with PBR in the beta build and the little I did was amazing.

This is a huge improvement to Roblox, when will we be able to have reflections based on the surroundings.

For example say we want a glossy floor, instead of making a copy of the room underneath, we can have the floor reflect the room, and not have that room under.

Look at these meshes 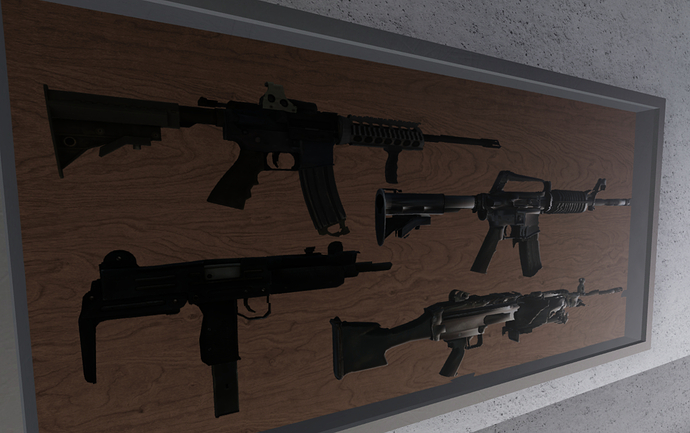 YOU CAN SEE SO MUCH DETAIL NOW

Also, will the defaut ambient settings for new games become Color3 0, 0, 0 as it as seen as to get the “most out of the new environment lighting”

Yes, we’ll be working with the other teams to have better defaults in our built-in templates.

Was this quietly enabled in December?
I’ve had it in my game for several weeks now.

You probably had beta privellages

On a per-user basis?
To my understanding, that’s not how it works.

They can only toggle engine features globally or per-place.
If they were doing an A/B test with it, that would be quite odd.

Have you been using the studio beta builds? I haven’t seen these two options till today.

Don’t quote me on what I’m saying as I’m not completely sure of the situation, but I believe that the volumetric lighting displayed in the video wasn’t technically a feature of the future is bright version shown. (1.0 v15 I believe)

In that version of the future is bright a feature was added that allowed shadows and light to be cast on both billboard GUIs and particles. The volumetric lighting in the video was likely achieved by having hundreds of almost invisible, blank billboard guis with a light influence of 1 offset tiny increments in front of the camera.

This means that the GUIs would only show where there was light being cast. In addition to this if the GUIs are blank and white, the areas where the billboard guis are visible would also be coloured according to the light being cast on them, essentially giving an extremely good volumetric lighting effect.

Unfortunately the feature of having proper shadows displayed on particles and billboard GUIs was removed in v16, making it impossible to replicate the effect with this method.

No, I’m saying the FFlag that enabled Future Is Bright v2.5 has been enabled since at least December 8th. I’ve had PBR lighting in my place and ordinary users have been able to see it.

@
Auto exposure combined with PBR shading looks so real :U

The properties for controlling it weren’t visible in Roblox Studio, but it was working none-the-less.
@evaera might have records for when it was enabled.

Yes, it has been on for a while for test. But controls were hidden in studio in case something went wrong.

Supah supah yummeh. Before & after shots!

Anyways, here a statue in my game using the new Metal material

I’m assuming the “SurfaceAppearance” instance is in the next update?

I already saw this change kinda. in older versions of future is bright, wood planks, and grass are really specular, but after this change, I think this change might’ve added extra polish to games.

I’m excited of what future is bright phase 3 will look like!

PHENOMENAL! I tested this on studio to see what all the hype was about, and I have to say, the night time looks unbelievably good almost up to high standards ( like Fortnite, GTA quality doesn’t completely reach, but is outrageously close). The day-time however looks alright, it doesn’t look as good as night time. The day time ended up being too bright with default lighting, and too funky ( I’m sure day-time can be fixed with some color corrections and other adjustments by the user) . So that would need a little work. However, amazing work so far!

An astounding update. It’s just so exciting… Roblox has always lacked in the visual aspect, this is a needed change that will be something every player can see with their own eyes. These updates will change the image of Roblox!

Glad to see this update. Looking forward to 2020.