As you may know; ROBLOX is going to be pushing an update that will make all existing audio longer than 6 seconds private. Normally huge, devastating changes like these will have a notice of atleast half a year to a year before it goes into effect. However, we have only been given two weeks.

The only good part of this update? Is that uploading audio is now FREE (although restricted to a monthly limit).

NOTE: This change shouldn’t affect games from 2007-2010 that used Base64 audio, as the audio itself is embedded into the place’s file. If you want to know how to archive these, I suggest you read Aurarus’ tutorial.

This update, if kept the way it is, will destroy millions of games on the platform that used audio. This will also make preservation a lot harder, and it seems we won’t have much time to do anything about it. Especially the users who made games a decade or so ago that have been long inactive or terminated from the platform.

These users don’t have a say in this and unless ROBLOX changes their mind, we won’t be able to join older games and hear the sounds and music that were apart of them anymore.

There is a way to preserve audio though, in the event that this won’t be possible in the future I am making this tutorial now in advance.

All you need to do now is save the audio as an .MP3 and boom! You have now downloaded the audio for preservation.

If you wish to do this for audio that’s inside of an uncopylocked game, open the game up in ROBLOX Studio and find the audio that you wish to preserve (searching “Sound” should bring up every audio instance in the Workspace that isn’t part of a script). Then, copy the ID of the sound from the “SoundID” field in the Properties tab and paste it into the address bar in your browser. - https://www.roblox.com/library/12222242/uuhhh-wav 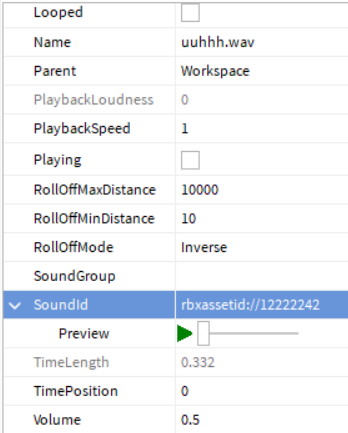 I recommend that you ONLY do this for games and audio that are uncopylocked by the original creator(s), as they would’ve purposely allowed the content in their game to be used by other people.

If the creator of the game is unable to keep their audio public for outside use, this method could also be considered.

I sort of rushed with this tutorial since since it’s a serious topic and there isn’t much time, but I hope this helped. If there are any questions or concerns, I can try to address them.

Or paste this into the console:

Or even as a bookmark:

While this is interesting, what does this do exactly? I assume you’re talking about the Inspect Element’s Console, although ROBLOX tells you not to paste anything into the console on their website. If you could share more information as to what this does, that would be nice.

Absolutely. window.location.assign(param: string) opens a URL with a parameter. The parameter I provided is document.querySelector('div.icon-play').dataset.mediathumbUrl.

You should read the MDN Web docs as they explain this in further detail.

Yeah, I think this might be due to the traffic that the Dev Forum is having at the moment in regards to the Asset Privacy announcement. That’s all I can think of, as this only started happening today.

There’s an orange banner on the top of the ROBLOX Studio screen that mentions this update too, so everyone in ROBLOX Studio right now has probably seen it.

Either that, or else the Dev Forum is just having one of those days…

The DevForum has been under heavy load ever Audio Announcement was posted.

Anyway, nice tutorial. Although I only have 1 audio that’s available to the public and 1 audio that I got from the public, its nice info to know for the future

Mfw the rain audio I try to upload gets “This audio asset has been blocked due to copyright violations.”
Anyways, great tutorial! Really glad that there’s at least someway to make things better despite Roblox’s efforts, lol.

What would we do if the game had more than 100 audios that don’t work? It would take so much time to download them all.

You can just use an extension such as BTR

Im using microsoft edge and i cant seem to find where to save the audio at any help?

What would we do if the game had more than 100 audios that don’t work? It would take so much time to download them all.

I don’t really know of a solution to this, and I don’t know how many games have more than 100 audios. I’m sure there are plenty though, but the only thing I can suggest is to take your time. I don’t think it’s possible to download a batch of audio all at once through ROBLOX Studio, so downloading them all manually is the only thing I can think of unfortunately.

You can just use an extension such as BTR

I suppose you could, but this tutorial is mostly for people who don’t want to download extensions due to possible security risks and such. BTRoblox by AntiBoomz is probably fine, but I would be careful with what you download as there are many fake extensions that aim to steal your .ROBLOSECURITY cookie.

Im using microsoft edge and i cant seem to find where to save the audio at any help?

I’ve almost never used Microsoft Edge so I had to fiddle with it a bit, but I think I was able to find the solution to your problem.

NOTE: I found that you actually need to let the audio play fully or else it won’t give you the options to download it for some reason. If you’re unable to download the audio at first, keep this in mind. 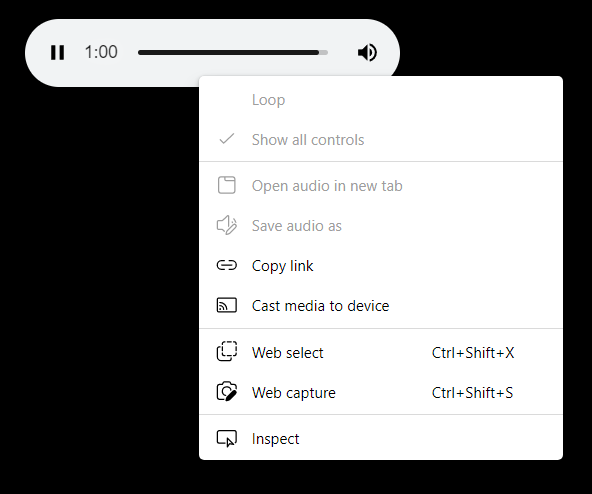 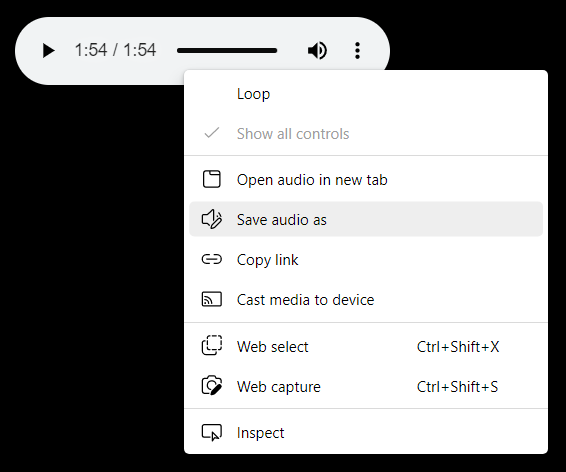 Now just save the audio as an .MP3 and you did it! Congratulations!

I hope this was the solution to your problem. I was a bit confused when it didn’t let me download the audio at first, so it took a minute or two to figure out why.

I cant seem to find this at all where should i look to find it?

NOTE: I found that you actually need to let the audio play fully or else it won’t give you the options to download it for some reason. If you’re unable to download the audio at first, keep this in mind.

Like I said; Let the audio finish playing first or else you probably won’t be able to see these options. If that doesn’t work, then I don’t know how to go about this.

Can you share a screenshot of what you’re talking about if possible? Seeing your issue would help me try to figure it out more easily.

What parts can i show? Ive never done anything like this before and i dont want anyone to get my ROBLOSECURITY cookie

Were you able to access the page for the audio you want to download? The page would be a sub-domain of the ROBLOX website (c7.rbxcdn). You said that you can’t find the audio player, so I would like to know what you mean by that.

As long as you don’t show any sensitive information from Inspect Element or account information, sharing a screenshot of what I’m wondering about should be fine.

Thanks for your help though now i can save all the audio in my game!

That is what I am trying to work on right now… I found an api but doesn’t get the c7 it gets like c4 which is corrupted whenever I change to .mp3, .wav, .ogg, or .mpeg lmk if you find anything please : D