Inside the Featured Games Program

Featured Developers, please introduce yourself so we can learn a bit about each other. This thread has been created with the intention of sharing your experience of being featured, how it helped you and what you may have learned from the program.

An example of what you can include in your introduction:

I did all the scripting, building and UI design of first Obby King Remastered update last January until last April, I started hiring the programmer, builders and testers to part of my team to working on Obby King Remastered together it growing faster since April. So I started working on the other new game last week, I look forward to an introduction to the new game to my community and Roblox soon

I’m a scripter and (sometimes) a builder, although I really specialise in scripting. For the most part I develop games alone, while sometimes also contracting builders to help me.

I’ve worked on two featured games, Clueless and I spy.

Clueless is entirely my own game, thought up and scripted by myself, including some of the building, although some of the maps and lobby @Aedificate were made by contracted builders. I like to work alone on projects which I’ve thought up in their entirety as I can customise and personalise the game to exactly fit my vision for it. Clueless is a quiz game with the twist of minigames.

I spy was my first ever co-development project, which I worked on with @xuefei123, who ended up doing the majority of the scripting (although we switched roles multiple times). The game idea, some of the maps, the scripting of a few of the systems in the game and game passes were done by me. Xuefei also did a lot of the work on this project, however. I spy is a 3D game environment version of the real life game ‘I Spy’ popular among families.

I spy was featured in November 2017 on PC.
Clueless has been featured twice, once on Tablet (July 2018) and once on PC (September 2018 - still running at the time of writing)

My twitter is https://www.twitter.com/2Steady4U, follow me there for occasional development posts surrounded by a sea of memes and irrelevant tweets.

I’m a scripter on Roblox who has made quite a few games.

I’ve made a game called Elemental Royale with @ectad as my helper. I scripted everything in the game ranging from the UI to the magical moves.

The game was featured on August in 2018. You can follow me on Twitter at @Turpichu if you want to see some development tweets on my projects.

I’m generally a lone dev, and I do my own scripting, building, and UI work. But I’ve had many opportunities to build with various other devs, big and small, to make great games which was fun! Some of which you’ve might of seen before!

On that note, look out for some crazy hyper speed parkour racing games in your future!

While I don’t particularly have a Twitter (Or one that is actually…nice) I am always on Discord under the same name with a link to my discord server, I’m friendly I swear!

I created The Day the Noobs Took Over Roblox 2. I worked on it solo. No real reason why I did it all alone, but it was mainly because I didn’t know any other Roblox developers until joining the devforum.

You probably could’ve guessed it, but I programmed the whole game, Fairy World, which was RickyTheFishy’s accelerator project for summer 2018. Working on this game was a lot of fun, and seeing what the featured sort did to the game was also interesting to watch.

Fairy World was featured during the July 24th, 2018 wave. We were featured on every platform.

While being featured, concurrents almost never went under 1,000 and revenue was great. We never had to advertise or sponsor while being in the featured sort.

I learned that focusing on retention is important because once we were no longer featured, our concurrent dropped to only 100, even below.

Hi. I’m your friendly neighborhood Stormcell. I joined Roblox in 2008 when I was 10 years old and made my first game to get success, Escape Jail Obby, shortly after. Now I’m a college graduate making games for a living.

In ye elden days I made games like Escape Jail Obby and Escape Jail Obby 2 along with a few others. However my more modern games (as of the time of writing this post) are Captivator and Ball Blast.

I’m a solo developer, so I create 99% of my games. It’s easier for me this way because I can ensure that my vision for the game stays in line with what I imagined, and I just enjoy the journey of developing a game.

My first game to get featured is Ball Blast and is currently being featured as of the time of writing this post (October of 2018).

You can also join my Discord community. We have memes there too. We value memes quite a lot.

Hi there! I’m Sean. Back in Febuary of 2018 my game Shadow Run was featured for the first time. This game is a new age type obby with unique mechanics but in a very nostalgic map setting. Scripting was done by @kingdom5 and @joritochip along with a bunch of other people who helped with little things (found in the game desc.)

Shadow Run was also a part of the First Movers featured sort as one of the first games to be fully translated into Spanish (and other languages).

Making it onto the featured sort certainly changed my life and my opinion about Roblox. I won’t be sharing revenue statistics but by all means, have a look at our visit stats:

Lets start with some current stats. Shadow Run currently sits at 15.25m visits with 158,000 favs and a 56% approval rating with 36,000 upvotes.
Some pre-feature stats if I can remember them: We struggled to get Shadow Run to around 60,000 visits before our Feburary featuring. Our approval rating was somewhere around 80%.

Featured stats. Started off feated peaking around 2,500 concurrent (previous highest was about 150). Changed the icon about a week in and immediately jumped to 5,500 concurrent peak. Stats start from about Jan 2017 when we released the game with 752 visits in our first month:

The rest of the months leading up to our featured month are as follows:

Since then, with very little to no updates our stats have been slowly declining with a slight bump in May for the First Movers program featured sort:

Our conversion rate in that month was 1.17%

10/10 would recommend applying to be featured. You learn a lot about yourself as a developer and your game itself. Lots of late night bug fixes after first hitting feature. Certainly gives you a lot to play around with too. Our original icon was on the game for maybe a week within our featured time. We peaked around 2,500 concurrent with that. After getting a new icon/thumbnail done in a cartoony theme we immediately peaked at around 5,500 concurrent within 30 minutes to an hour of changing it.

Here’s our monthly visit graph just for fun because its such a drastic change: 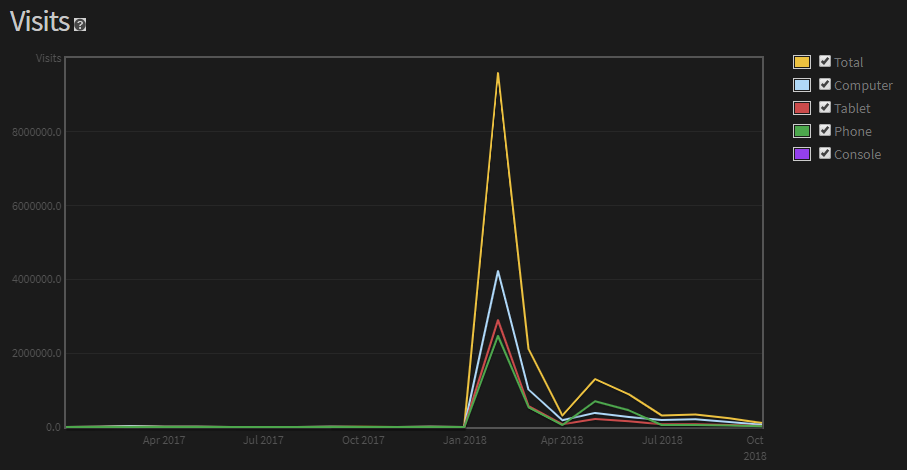 Please feel free to message myself or any of my team members if you have any questions regarding our experience on the featured sort.

Even though I created like 90% of it and it is on my profile, not only I made it. The staff of the game development group I created back in 2016, Exam Studio, has done many contributions to the game. Moderators moderate and test the game every day, while great scripters like @MartimDev help me with actually anything I can’t code.

Hi! My name is WhoToTrus, the first ever project that I started and lead turned out to be my first ever featured game, proud of myself for that!

I am TheNexusAvenger and this is my development group. I work here with me and my contributors. Every game produced has a story and a purpose. One thing I’ve learned after 5 years - you never know what is gonna be released next.


Joke intro aside, I am TheNexusAvenger (as my forum name shows). I am known for Ultimate Boxing and Roblox Battle (2018 Edition) under the entity of Nexus Development. I do my own scripting and UI, but I also get contributions from others (see the contributor rank in the group). My Twitter handle is @TheNexusAvenger

Hey, I’m Turpichu4321 but you can call me Turp. I’m pretty much a coder that scripts a bunch of games on Roblox.

I’ve been working on a game called Elemental Royale with my friend called @ectad. I scripted mostly everything in the game and made the magic moves. The game was featured in August 2018.

I’ve learnt a lot during the featured games program. One thing to remember is to always double check your updates in another place and test it thoroughly. You don’t want to release a game breaking update, do you?

Hey My Name is Confusen

What game did you work on and please link the game as well?
ALL OUT ZOMBIES - https://www.roblox.com/games/1645083423/NEW-BOSSES-ALL-OUT-ZOMBIES-Beta

Nice to meet you!

What game did you work on and please link the game as well?
I worked on Marbventure !

What was your role in the project? (building, scripting, etc.)?
I mainly focused on Scripting majority of the things & making UI.

Share any analytical data you have collected from the featuring period (optional)
People tend to Dislike Games that don’t handhold you through for the first part, so a really good Tutorial & pointers on what to do are very important when Featuring a Game, or your Game will get Dislike bombed due to confusion.

What have you learned during the time you have been featured? (optional)
It’s really important to have Communication between the Developer(s) & the Community. This way, both sides can have the best experience together. This doesn’t mean you have to always listen to what the Community says though, you yourself as a Developer probably know better what’s best for your Game, but don’t disregard everything.