Is my game Annihilation good?

Before I give my feedback, I’d like to address FallinqSnowFlake’s comments.

It reminds me of an old game played years ago. Try spicing it up and creating new boundaries for Roblox.

Not every game has to push Roblox to its limits, especially when it’s their first fully original game made without the use of free models. Just because it’s possible for some Roblox games to be absolutely outstanding doesn’t mean that everything has to be; there’s nothing wrong with games more in the spirit of old Roblox games. We’ve all gotta start somewhere.

With that out of the way, onto the feedback: it’s quite barebones right now but I think it’s off to a great start! I think there’s always room on Roblox for more arcade-y styled games such as this. The map leaves much to be desired but obviously that’ll be changed. The core gameplay itself is a pretty fun concept of just shooting down your enemies; the killstreak system is a nice reward for skilled play, although I think that maybe it should be smaller buffs. Instant kill or a forcefield seems a bit much, especially considering that if the player is on a high enough killstreak chances are they don’t really need those rewards. Perhaps stuff such as faster reload/fire speed?

That brings me to my next point: the guns are currently overpowered. They currently even leave no need for killstreak rewards beyond speed+jump, especially considering that headshots just instantly kill anyone. I’d recommend lowering the clip size to either 6 or 8 bullets as well as lowering both the fire speed and reload speed slightly. Instead of instant kills or forcefield, killstreaks could buff these slightly and perhaps instant kill headshots could be a high-tier killstreak reward. That being said, there’s no real issue if the intent is for the guns to be overpowered. It certainly creates a faster paced game with constant kills and deaths which I’m not fully opposed to.

Overall, I think it has a lot of potential. I think next the map should be focused on more with careful consideration behind the mechanics; for example, spawning on top of the buildings gives you a huge advantage as its easier to hit heads from there. Maybe instead, there could be a ladder that’s out in the open to climb up that puts you at risk, but if you make it up then you can get rewarded with the easier headshots. Just a quick little idea. Regardless, I can’t wait to see future updates! I think that this has potential to be a great game that can grow alongside you as you learn Studio more. Keep up the good work!

If it was made to be blocky, there would not be realistic faces and Rthro in Roblox as of current, I agree with @FallinqSnowFlake, Roblox is ever evolving. Anyways, the GUI is not that great, it is in the middle of my screen for me, the gun is too large and very blocky. Grenade is unrealistic, blows up way too soon and doesnt make a noise.

Do you have any updates I can add?

Do you have any updates I can add?

Oh sorry for repeating that.

You’ve been given feedback, do what the feedback says to change and then ask for more

Can you add some screenshots of the game? 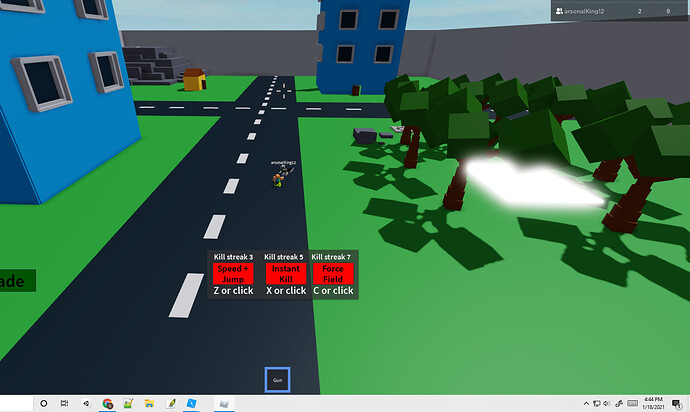 You may want to add a round starter and the UI needs some work.

Players have no reason to come back, add something like a gun shop and cash .

A few tips, use the module Fast Cast for your bullets, much better bullet ray casting.
and another note, sprint is too fast, make it only slightly faster.
Finally, a better UI, without random labels scattered around, make things organized.
For example, I’m working on a survival game, and the UI’s are grouped based on function.

Like above, right? They are placed in an organized and balanced manner, which would make it easier to understand.

Starting to work on a kills shop. And what type of guns like a sniper? 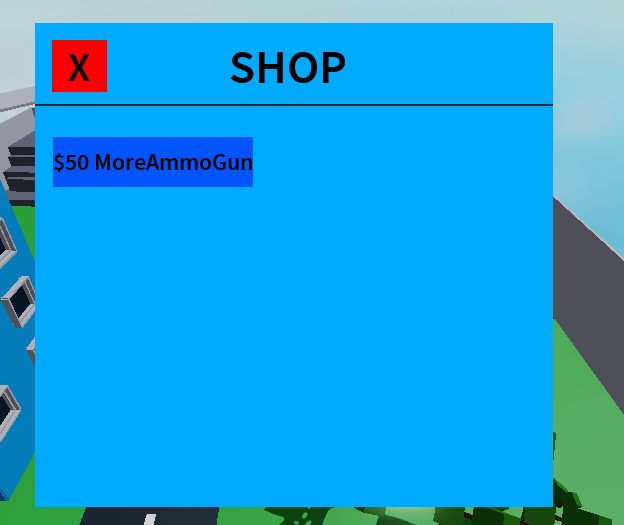 I just added a new gun. 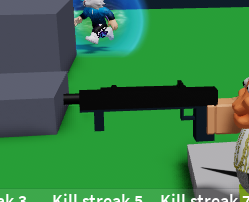 Edit: its in the shop

I also just added a shot gun and sniper. In the shop.

Try making your guns in blender. And also since I see you posted a web.roblox.com link, maybe come back to the devforums when you are older

Anyways, your game looks pretty nice for a beginner except some more detailed guns would be nice.

For me, the bullets that come out of the gun is pointing the wrong way. Work harder! For a first time no free model game, nice job!

the bullets that come out of the gun is pointing the wrong way.

How would I make the bullets go straight?

I’m not sure, but if your script has a line of code that has the bullet size try to re shape the size.

Is the map good? I have made a couple of updates to it.