Confetti sprays into the room

Thank you so much!

What’s going to be happening with GamePassService then since UserOwnsGamePassAsync will be under the MarketplaceService? Just deprecated?

Also would be nice if we could batch request UserOwnsGamePassAsync and GetProductInfo for games that include a lot of Game Passes.

Apart from the confusing API introduction, at least for new players, I like the change. I hope this is a prelude, or at least a consideration, for more game pass functionality such as the ability to create temporary game passes or developer products for specific amounts.

I have more on this here if anyone’s interested: Custom Developer Products

Are we getting a new web API endpoint with this change?

https://api.roblox.com/docs#Ownership only deals in asset IDs. It’d be great if we could get new official endpoints added for badges and gamepasses. I maintain a bot which is reliant on this functionality to provide certain features.

Here’s my feedback related to this update:

Like Badges, we wanted to restructure how we store these objects

From what I can see, badges still use the old ID system, so it seems like badges and game passes didn’t receive analogous changes. Game passes got an entirely new number set for IDs, while badges were just restricted to their proper method calls. Are you planning to further update badges to use their own ID space? What are the reasons behind the different approaches to (what seems to be) the same problem?

It feels strange having two methods that serve parallel concepts but don’t have parallel names. PlayerOwnsAsset vs UserOwnsGamePassAsync doesn’t feel great. Are there plans to deprecate PlayerOwnsAsset and make a new method called UserOwnsAssetAsync?

I’m not a huge fan of tacking on -Async to the end of yield function names, but I guess that’s the world we live in now. Many older API members are yield functions but don’t use this style of naming (see BadgeService) This has introduced an extensive inconsistency in the API and I think this was a misstep. I can’t really offer any good solutions to this problem now that it’s spread so much, but I wanted to offer my feedback on it.

In the previous update, I believe it was stated that developers should use GamepassService:PlayerHasPass. Now it seems like we have two methods in the API that do exactly the same thing (MarketplaceService:UserOwnsGamePassAsync). Are you planning to deprecate GamepassService?

When this change was originally announced, a warning was added to PlayerOwnsAsset that triggered every time you checked game pass ownership with that method. Even though this feature was delayed until now, that warning has remained the entire time. This was especially unfriendly to new developers who were just getting started with game passes.

The warning also appears to be giving us conflicting information (use GamePassService instead of MarketplaceService:UserOwnsGamePassAsync). Why has this warning remained enabled this entire time?

And Osyris beat me to this one:

This is a very un-Lua paradigm. I don’t understand why it keeps popping up in the API. pcall is not the same as a try/catch.

What if I pass the wrong arguments? What if I misspell the method name? A pcall will silence both of these errors.

Why not just return a success value?

Heres what the new game pass page looks like 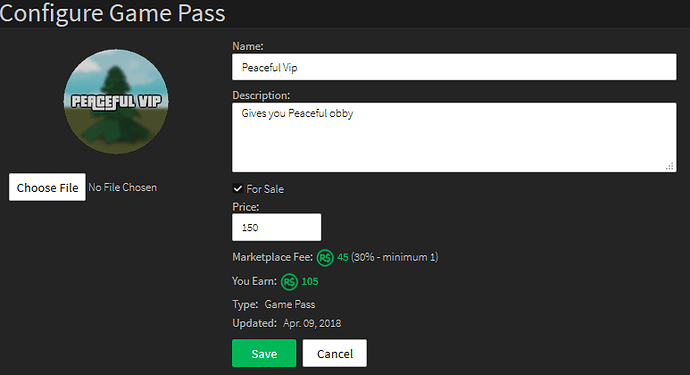 image773×421 37.7 KB
There’s no checkbox to allow or not allow comments though, and when i checked my gamepass the comments section was gone

Considering they’ve removed comments from games, and even most hats / gear, I would not be surprised if they are completely deprecating this feature.

I can’t help but feel that that page is incredibly basic and lacking in something massively.

This is asinine that they removed comments on gamepasses. Why is it so hard for Roblox to end spam? I don’t see youtube comments filled with “get free google ad sense at this link scamlink101.net”

Now where do players look for what others say about gamepasses before they buy it???

Youtube does have botted comments, but have very good detection methods can tell who is a legitimate user and who is a bot trying to promote something in comments and accounts that bot comments are quickly blacklisted and then shut down.

There was nothing about the gamepass comment section being removed in the OP of the changes to gamepasses, we deserve full disclosure as to why they were removed, and what Roblox is doing to replace the desired functionality of a comments section.

Maybe as a sub-realm @Nexx could make a fabrick like system for gamepasses so you can read reviews on a gamepass to ensure it’s legitimacy and what’s included in the gamepass. It’s a shame that comments are getting fully deprecated without any alternative but that seems to be an increasing norm of deprecating/removing first and ask questions later without any alternative. It’s just an floating idea there but I know it would be insanely great and the demand of such a system would be high - it just depends if Nexx feels comfortable to develop a system like that (or expand on the existing Fabrick structure)

Please tell them, I love them. And I will be thanking them even more at RDC 2018.

As you might have noticed with the implementation of this change, game passes no longer support the comment & favorite options. This is mostly due to the shift from game passes moving away from the features supported by the asset IDs.

We don’t have information at the moment in regards to future changes to bring it back but we will follow up with internal teams and provide a response on this thread.

I’d hope that we’ll be able to toggle comments on game passes when they’re back. If we can’t toggle them and are forced to keep them on, don’t include an option. I know for sure I don’t want comments on my game passes because they get used as a means of berating my games or spamming scam comments.

Found a minor issue. The game passes tab still exists on the favorites page even though it should have been removed since you can no longer favorite game passes.

Visit UnderMyWheel’s Favorites and see what they like. Browse through their favorite places, accessories, and a lot more. Also, find the favorite gear they use in games and get one for yourself!