Programming chassis in video games is a very overwhelming, difficult, as well as tedious process that is hard to get it just right, this library was written to solve this problem. It’s also a great place to dissect the code to learn on how to write your own chassis.

If you are planning on making a realistic car racing game, it’s probably best in your interest to avoid this library as it is not meant to be used in racing games. But if you are making a game like Bloxburg, Emergency Response: Liberty County, or something that doesn’t primarily focus on motor vehicles and you want to save yourself some time, this is probably a library for you.

You will need to get the library and initialize a new instace of the class.

And whenever you are ready, you can compute properties via the method below:

This looks cool! I’ll try it out once I find the time

Great to hear! I am also planning on adding example project but I need to clean up some of my old messy testing code.

This is something I need. Thanks for making it!

Whats the benefit over other existing chassis such as A-Chassis or AG-Chassis which is what some of the games you mention use(modified versions at least).

A-Chassis is advanced system, feature-rich, works out-of-box with lengthy configuration, you have to follow it’s rules to make it work.

On other hand, MotorVehicle is a library, needs to be interacted with code and it doesn’t force anything upon your chassis, so you can make your chassis structure how you like it. You simply feed it with information, and it spits out information to you, then can use the output how you wish to.

You should add this into your post, they are all good selling points.

looks interesting!
i may try to add this to my game 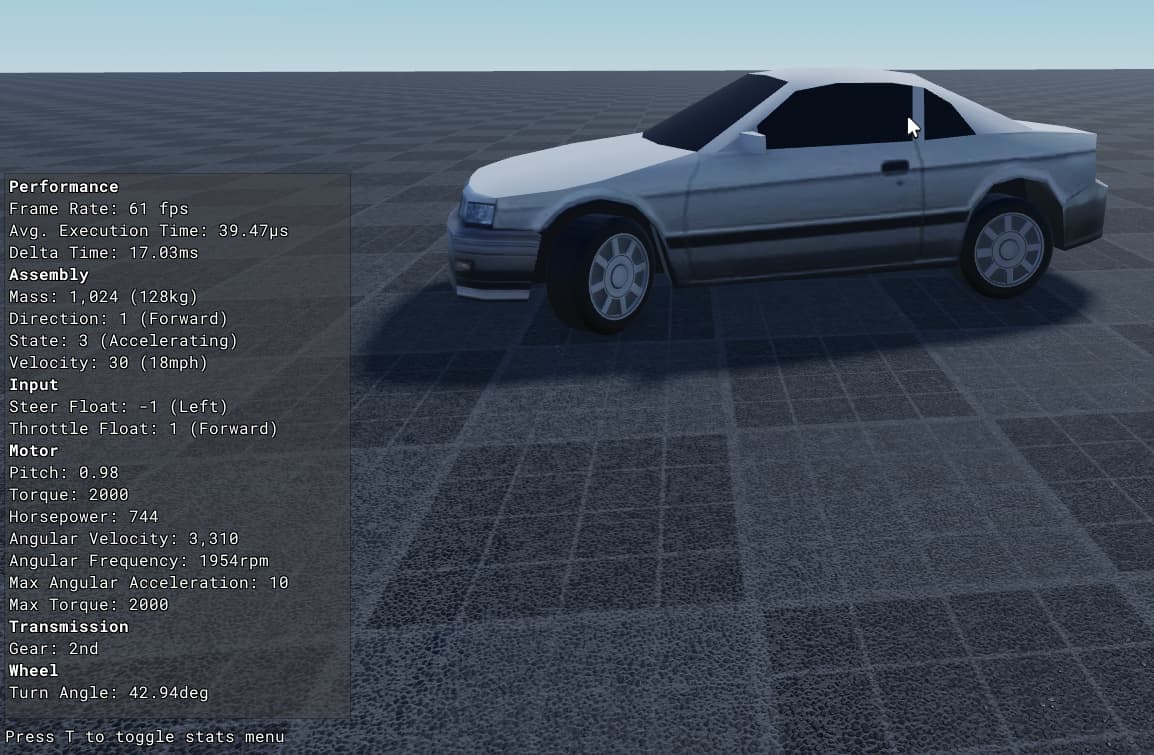 I am working on 10th generation of the chassis where constraints will be replaced with pure math and raycasting, it should enable greater control of the chassis feel without it tilting/rolling over at high speeds.

How well does this function with fluctuating or low FPS? There have been times whilst working with chassis that a user’s FPS will affect how well the chassis functions.

Are you talking about the current chassis? If yes, then FPS should not affect how the chassis behaves because it’s relying on Roblox’s constraints.

On the other side, the upcoming chassis will be using raycasting, which so far is unfortunately affected by FPS because Roblox doesn’t give us frame rate independent loop with fixed delta like Unity does with it’s fixed update function. I am not sure how to solve it yet but I am leaving it for later since it’s not important at the moment.

But, here it how the raycast chassis looks so far:

It still needs gearbox, and all that fancy stuff that the current chassis has.

Since the upcoming system will be using raycasting.
Does this mean that this system also can be used to create vehicles without wheels like hover cars or vehicles with two wheels?

Since I’m assuming you are using raycasting to adjust the height and balance of the car and not the actual physical wheels?

I want to know what you guys think about this API design, things like:

Whoa, you’ve just singlehandedly shot down my single biggest excuse for not revamping my own NGChassis project from a few years back: transmission math. You good with me integrating this into that project and publishing it?

You good with me integrating this into that project and publishing it?

Yes, because It’s under the MIT license.