Negating a part to a differently colored part doesn't change the color of the union?

The title is a bit confusing, but I’ll explain what I mean. For example, if you were to negate a part and change it to black, unioning it with another part that’s a different color would make the part that was cut out black. Still confusing, but I’ll show pictures. Basically, my problem is that this feature doesn’t seem to be working for me anymore. 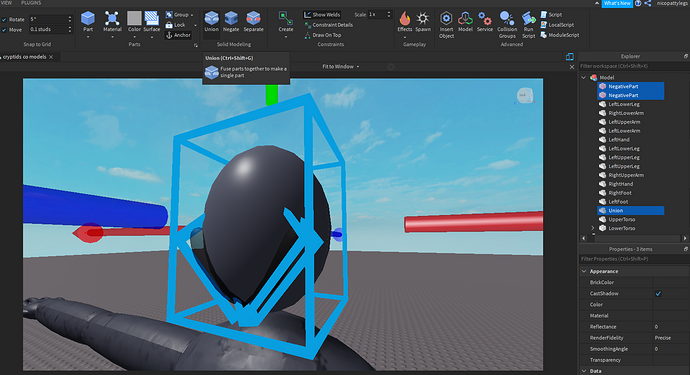 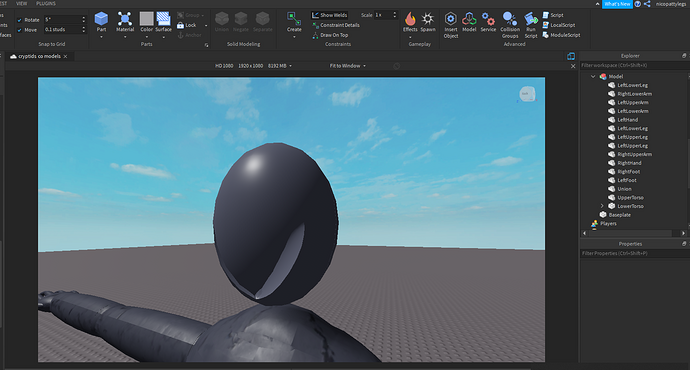 Before, unioning these parts would take account to the fact that the negated parts are black. With this, the part that was cut off would be black. However, this doesn’t happen anymore. Am I doing something wrong, or did this feature change?

Unfortunately, you can’t manipulate the colors of a UnionOperation in any way, by negating.

Parts added into a union will maintain their color from before they became part of the Union. However, by negating, you are removing instead of adding to the Union. This means that negating won’t edit the color of the negated region, since it’s just subtracting away, not adding.

Well, before you were actually able to do this. If you were to negate a colored part, the surface that was cut out would be that color.

Here’s a better example of what I mean: 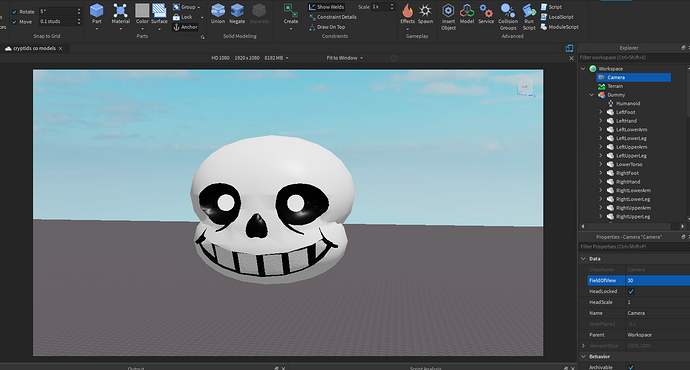 I made this model around 2017-18, I dont completely remember (please ignore the fact that its sans). As you can see, the negated parts which are the eyes and the mouth are black on the inside. That was because the color of the negated part is black. However, with what I’ve noticed, this doesn’t work anymore.

Maybe someone else with more experience than myself, who stumbles across this post, might have some insight. I don’t ever remember this being a feature, so I can’t really be of any help.

Anyone else know of this? Or is this only me?

I think this was part of CSG v1, which you can still enable through some old option. It’s supposedly much less stable, though.

Edit: The option was in settings under Physics, as shown here:

New CSG system will be made default in Studio Announcements

The time has come. We’ll switch the new system on by default tomorrow morning (thursday, PST). If everything goes well, we’ll keep it on, but if there are too many problems to bear, we’ll turn it back off, fix it and then repeat… Work is still ongoing on a number of cosmetic issues, but since the geometry generated by the new system won’t ever be exactly the same as that of the old one, no amount of work can make the switch completely seamless. We apologize in advance for any inconvenience thi…

It might not be an option anymore, though, I can’t check.

Yeah, I think I just read something about that. But is it worth to swtich over to CSG v1? I don’t want to be running into any issues in my game, especially since I want it to be as optimized as possible.

If you really want that effect and don’t want to compromise on stability, then you can use export the v2 union and texture it as a mesh instead. I can’t speak as to how significant a difference it is.

Alright. I’ll try it anyways, and see if I encounter any problems. Also, from the thread you posted it seems when CSGv2 had a bit of issues, but it was quite a while ago so I’m not sure if those were fixed or not.

I’m sure it’s been improved in the last 3 years, and v1 is unlikely to have received as many (if any) improvements.