Bezier curves (weighted tangents) are tricky. Not so much during editing, but during real time evaluation, especially when you have dozens of characters being animated at the same time. On a phone

. We are evaluating solutions to that specific problem.

I see, that makes sense. Having all that going on at once on a phone would be quick taxing on performance. What are your current ideas for a solution? (If you can’t share that yet I understand. But if you can I would love to hear about what you’re doing to try and fix it)!

This next one is mostly just personal preference, but I find it annoying when it Scrolls down automatically when I start to make a curve go down to far. (Blender does not do this and simply makes it go off-screen. I might just be used to this. I would like an option for this however).

We wanted the canvas to show as much of the curve(s) as possible, with as little interaction as possible, but that leads to some unwanted side effects such as the one you describe. We’ll improve that!

I have a few ideas as to how this could be improved.
Make it go offscreen like in Blender (If possible). Or maybe make it slowly zoom out and show more. I think the main reason I dislike it is because of the speed. It jumps down way to fast. I think the current way it’s setup could work better if it were slowed down by a lot. (When doing precise editing fast, uncontrollable jumps like that would make it pretty hard). You could also use multiple of these methods and make it so a user can pick witch they want to use (I would recommend making them adjustable too).

image1408×429 44 KB
Look at all that unused space! I’d at least put the TimeLine Unit option and the frame rate option up here, as some games may prefer to use 24 fps, while other use 60. Having that easily accessible would be a very user friendly feature and great time saver. (Brought this up because I think that this would also be an important change).

I’m glad I could help

So I’m really enjoying this update so far, very nice to have control over animation to this level.

I do have a few questions such as this problem where when I try to animate a negative rotation to a positive it tends to go around the entire other way, This may be due to my lack of knowledge on how rotations are supposed to work, but it would be great if someone could help me out. heres an example :

And my other question (I come from blender animator) is will we be able to move in and out the tangents, Cause i noticed you can only rotate them at the moment.

What you are asking regarding the length of the tangents is related to Bézier curves/weighted tangents, there’s already a discussion about that somewhere above.

Switched some of my animations to these, it’s wayyyyy smoother. But now my game crashes near instantly when any of these animations play, in-studio and in the player.
Would really like a fix asap.

So @Parraing we can just update Roblox Studio app and start using it?

Made a lil walk animation in like 5 minutes with this, looks much better than the default editor

Sorry to hear that. We will reach out to you for more info and look into it!

This is an amazing addition and yes it can use some dips and dabs here and there but there is a main issue with this and it’s that it crashes your entire studio upon using these animations anywhere (Tools , Player animations) etc.

Would really help to get this fixed pretty soon.

I think that is the main issue with this curve editor from all I can run into.

Wow this is cool! Can’t wait until this comes out, I definitely will use this. Great job!

This is a very cool update, ive always found it hard trying to manually make a curve for animations and it never looked right.

Can we expect this to come to NumberSequence editors in the future?

Bumping this. Would be extremely useful in Creating smoother transitions in Particle properties rather than having to emulate it with the Linear blocks in NumberSequence. Would allow people to Make stuff like this a lot easier:

Ive had issues in my experience and only just realised that i think im having the same issue as you. Animations on humanoids work fine with curve editor but animation controller meshes (while they work in editor) don’t play in studio when you initialise via a script or local script.

I can confirm that the curve editor does not work when used on AnimationControllers (ie non-humanoid meshes). Switching to a (only) node editor animation fixes the issue.

Animation markers don’t seem to be working when using this, I keep getting this error;
“Invalid character encountered in marker when decoding MarkerCurve. Instance likely corrupted”
Animation plays; but marker listener events don’t seem to fire.

how do i swap to a “only node editor animation”

none the less my studio crashed trying to use the animation on anything else but dummies that ive tried so far.

Markers are broken as well.

Amazing, I’ve used it so far and my animations are now smoother!

The only problem I have with it is that the animations crash you when played in-game, it’s a shame and really annoying I have to wait until this is fixed 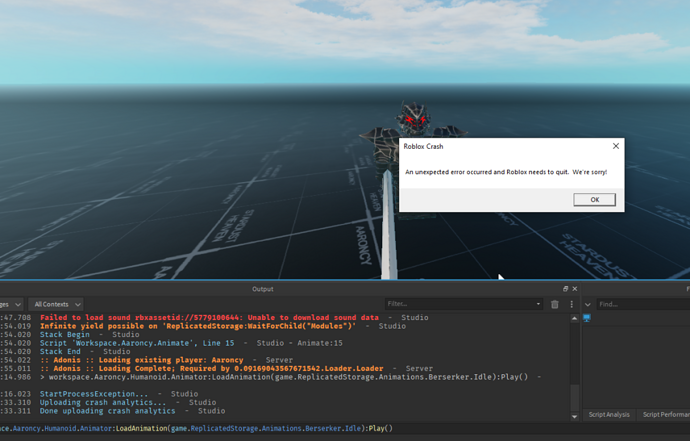 You have to create a brand new animation.