Yeah, it has a long way to go…

the weapons is not from battle royale

Looks great, but performance leaves a lot to be desired, is fairly buggy, and the mouse cursor isn’t locked to the screen, so moving the camera is a pain

I love how it shows a lot of tech that Roblox has to offer! Workspace.StreamingEnabled, Proximity Prompts, etc. Really nice!

True AAA games have very large content teams. We want to make sure that smaller teams can create great content on Roblox. However, there is certainly lots more work to do to improve our engine capabilities further.

probably your wifi being not so nice which is very sad

Ohhh yes, it would be interesting to know how you guys pulled that off!

Yeah, roblox’s particle system is basically a toy at this point so you could try to improve that.

This games graphic is awesome! It is a bit laggy on mobile though, but runs well!

pretty sure it is, the animations and the way it works is all the same. ill look into the code and see

edit: its not the same, it looks very similar though!

So I’ve tried it, more than just one time actually, and I have to say I’m quite impressed seeing how far Roblox has come from being a basic and primitive game like it was in 2006-2013 to what it is now as of writing this 2/14/2021. What a leap! Here’s my thoughts.

First Impressions
My favorite part about the whole tech demo is how far you can go and how BIG the map is when you really look at it. It’s almost enough to make a game that takes place in 2 different states/provinces, or between 2 countries depending on what you choose for your game, and where you plan to have your game take place.

The vehicles
I’ve never played a Roblox game where vehicles have felt nice to drive. They’re a pain to get into since you’re fighting against the game and the NPCs in just trying to get into them, and when the game lags steering suddenly becomes unresponsive, but when it actually runs it’s not that bad, but it does leave a lot to be desired

The handling of the vehicles seems to have taken from many games with drivable vehicles, but the games I think of when driving the vehicles are Grand Theft Auto IV and the old GTA games from 3 to SA. Why these games?

I made a quick video of me taking corners in a car in GTAIV. If you’ve played the tech demo and driven the vehicles you might see a similarity. The vehicles in the tech demo have very similar handling but their speed and throttle match that of a game like GTA where the vehicles take off quick and cut corners hard.
example_WEB.wmv (3.7 MB)

With the tech demo cars, some vehicles either take corners and lose control immediately or don’t slide at all. The max speed of some vehicles makes no sense. Why do cutting edge vehicles go slower than the cop car? Why does the cop car go up to a 130 miles an hour and beyond? I expect a Range Rover and a Porsche to match such speeds but apparently they can’t, and neither can the dune buggy. Back to vehicles sliding, it seems the vehicles slide a lot when turning on sand. Not much sliding but enough that you end up sliding left or right and eventually spin out if you don’t maintain control.

The City
The city itself isn’t anything special. You have the downtown area and outside of that the rural neighborhoods which don’t seem to be populated.

Speaking of population, the city has AI but it isn’t all to advanced. The drivers will usually drive into the oncoming lane or into other cars. They also won’t stop for you if you step in front of them. They will also stop at redlights even when a light is green. Not a problem for me though, I don’t plan to use AI in my games anyway.

Everything else
This is a pretty good tech demo, but running it in Studio produces performance problems and it’s annoying. Sometimes performance issues will happen even in normal gameplay, but it’s still playable. I’m certain some people will be using the vehicle chassis in their games, if they are allowed to without problems. Great work!

This game has impressed me a lot, but there are some “Stuntmen” in the city who love to ride on the roof of your car: 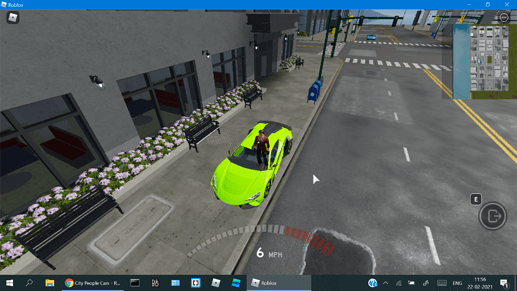 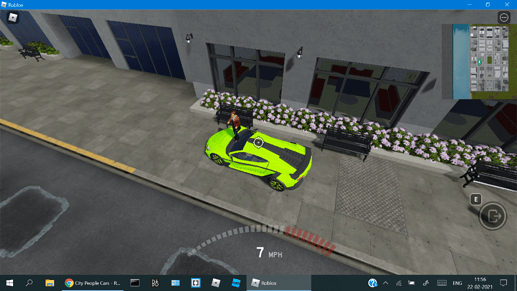 The game lags alot for me on my side.