If you would like to add the old mouse that was just removed yesterday (6/29/21) back to your Roblox game, you can use this model that I created in about 15 minutes. Just drag the RobloxGui ScreenGui from the StarterGui folder into your game’s StarterGui instance, and it should work out of the box. If there are any bugs, let me know. It’s about 55 lines, and should be pretty easy to modify if you know basic scripting. I think the new mouse is fine, but I’m sick of people complaining about it so I made this so your players can stop complaining about it, too. The cursor is taken from an April 2015 client (if that makes any difference, they’re literally the same png file in the newest release and it was the only client i had on my laptop)

Use Old Mouse Pack by p0s_0 (@pos0_rbx) and thousands of other assets to build an immersive experience. Select from a wide range of models, decals, meshes, plugins, or audio that help bring your imagination into reality.

Awesome resource, all my homies hate the new mouse

If people are sick about their players complaining about the mouse, then they can use this or write their own script to change it back to the older one.

Minor visual details make up the feel of your game (Atmosphere, UI, etc.), so it’s important to be able to control those aspects, and resources like this help with that.

Yes, but if the developer decides they want to add the old mouse back, they can either write their own script or use this resource.

If they don’t like it they just have to live with it.

Fortunately, no, actually. We don’t have to live with it because of people like @p0s_0 who make these resources available.

If you don’t want to use it, you don’t have to. No point in criticizing this resource because you don’t personally plan to use it.

And yes, I search only to show you :p.

no one is forcing you to use this
if someone wants to use the old cursor then they can do this, it doesn’t matter 0)0

I really do not see why you need the old cursor since the new one is better in every way.

Okay great, you like the new cursor, and that’s totally fine!

But…there’s one problem with this statement. You see, the creator of this resource isn’t you, neither are the hundreds of other Roblox developers on this platform. Some individuals believe it or not, like the style/appeal of older roblox assets, and want to feature said assets in their games. You aren’t being obligated or in any way, shape, or form forced to use the old cursor

Thoroughly surprised how quick people are on these feature changes though.

It’s a preference thing. i come from the clanning community in which we change our cursors all the time to have our aim slightly better than before for maximum capabilities. It is literally the sweatiest, most competitive Roblox community, and I’m not joking. (And if some Phantom Forces kid says otherwise, do your research first.)

So, as somebody who is generally focused on your cursor to improve your gameplay’s quality. Take a look at the cursors we have had here. 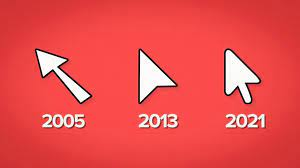 Notice the lack of a line coming out of the 2013 cursor, one common in most computer cursors. It is much better in my opinion for the gameplay of all games, as most games use the standard cursor, which could be better for aiming and perhaps accessing GUIs faster, clicking stuff, etc. One thing I could imagine is it’d be easier to do minigame games, as the cursor was shaped better. The new one has that extra line, which could lead your eyes off the focus at hand and all that.

That’s why different cursors make a difference, and why the old one was better. It improves the gameplay for players.

I don’t have much against the new mouse, but what I’d love to see is the old leaderboard back. I really don’t like the new one

You would have to patch the CoreScripts to do that. It’s simple if you know how to script. I could make a resource for that, you can vote here:

This script caused players in my game to lag immensely, even to the point of crashing. I am not using this script again. And, yes, I thoroughly investigated, and the lag stopped the second I had removed this script. I suppose I’ll have to stick with the new mouse instead.

You should change the script, every frame you’re connecting a mouse enter and a mouse leave to every guibutton, which will lead to horrid memory usage and performance.

For an example, 7200*(number of gui buttons) mouseenter/leaves will be connected every minute with 60 fps.

Yeah, I programmed this on ~2 hours of sleep and was NOT thinking straight at all. I’ll work on it tomorrow and see what I can do.

Same issue I had. Definitely should work on his coding.

Yeah I fixed this in a new module I made lol, I should really update this.