I have several questions concerning the Roblox Search Optimisation and how exactly it works. I’ve been working on a unique Street Soccer game and when I’ve tried to enter some keywords to the search bar to see the ranking of my own game, my day just got worse. Here’s what I found what I typed “soccer”.

My game was the 161th to appear in the results despite being super relevant to the search query.
­
Here are some factors that I believe plays a role on the Roblox Search Optimisation

Yet, despite all of that, some low-rated irrelevant (to the search query) games that gets little to no players appear higher just because they spammed bunch of random words in the description

The worst part about it is that scam games and a game that literally stole my game icon and thumbnails appeared much higher than my own game… i am literally losing my mind.

Obviously, if I put 2 words in the search query like “street soccer” my game would appear among the first results however that lowers the likeliness of getting players since kids usually don’t write a lot on the search query.

Here are my questions:

Odd. I think the reason why your game is lower is because that most of the games have a higher like to dislike ratio then yours, but that’s probably not it. Lots of those games have stuff like OBBY OBBY OBBY and you know the rest, in the description. Those type of games are higher because they are abusing the system, which then makes finding good games harder

Could it be because of the

emoji on the title? I have heard that apparently emojis might play something into this.

You should probably remove it. Roblox has a better way of explaining: 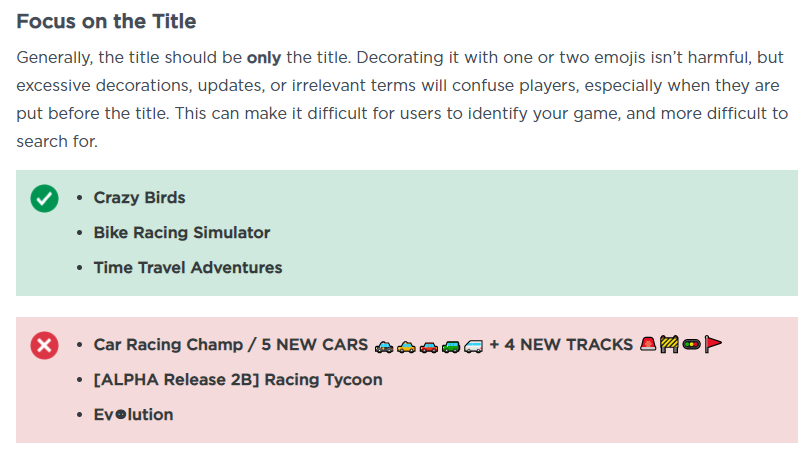 Is there a way to get the game appear higher in the results? Or is it doomed to be left in the perpetual darkness among the botted games?

I would check out Roblox’s article on game metadata and good meta data practices.

Is there a specific lists of factors that play into the Roblox Search Optimisation that I could look into?

Game Metadata – Best Practices(already linked but why not)

Thank you so much for linking the article, it was a good read. I have now removed the emoji in my title and I’m hoping for the best.

I don’t think removing the emoji has changed anything, I’m guessing because this change is relativity new.

I changed the description as well, I will give it few days before looking back at it.

Yea I was going say you should imply the word “soccer” as much as possible.

There’s nothing wrong with it. All games do it to push them up in the algorithm. You have to take advantage of this.

Why would I need to do that if I already mentionned the important keywords numerous times?

Because the algorithm also looks at the players recommended, so if they played something like adopt me you want to have tags for basically everything.

Tags don’t bump up your game, that’s not how meta data works. A well written description is better then tags.

You should put the word “soccer” somewhere in the title. It’ll probably make it show up more.

No, the word football is more widespread.

His game is about soccer, so why would he put football in the title?

Because everyone else in the world calls it football, and usually these “soccer” games are only played by people from Europe/South America.

Super Striker League is a popular football/soccer game yet it appears to not have the word soccer.

It’s made by Cindering, a well-known developer that made Roblox High School 1 and 2, and the game is well made, of course it’s gonna be popular.

Yes but I’m saying R_obotz doesn’t necessarily need the word soccer for the title of his game.