Please note this is an outdated post and looks really bad compared to what I build now.
If you are perhaps looking for the most up to date hallway I currently have, please check out SCP LCZ Hallways.

Hello, I am Tiwernik, or for short Ti. I’m currently making the map for my SCPF game, and here’s a screenshot of a hallway I made. 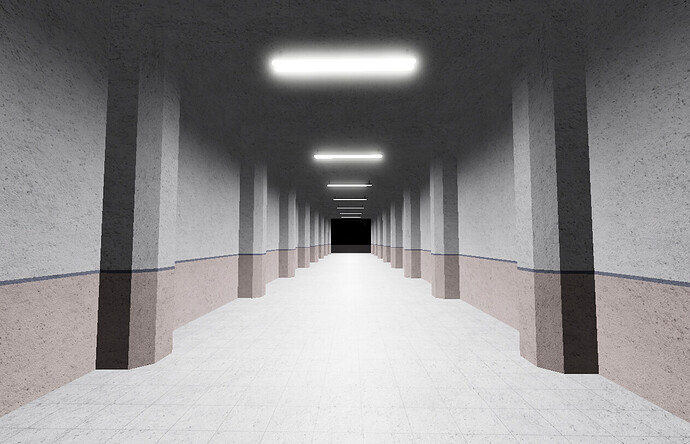 EDIT: I am going to revamp it with textures, decorations etc.

It has already been revamped, SCP LCZ Hallways

Looks great. The only thing I can recommend is making the end of the tunnel. Also maybe a little bit darker would help too.

The long tunnel is just for display, in reality made out of some segments that will be used to the real map. Thanks for the feedback.

I would add some mess like shelves, pallets, flower pots and try to add some textures there because the ceiling and the wall are the same color. That is all.

Yep! You’re in the right category! So far, this hallway is very cool! I love the vibe it gives off, empty and liminal! For me, I don’t think you need to change anything!

Thanks for the feedback! I’ll tell you when I make a map out of this so you can see the final product.

Looks pretty good! I would, however, suggest toning down on the lighting and adding some doors, but other than that, good work friend!

Looks a little empty, not sure what you should add but doesn’t look right.

Besides that, the hallway looks good.

The ceiling is plain and boring. You could do with adding a pattern or tiles to it. It would also be nice to maybe use wedges to extrude the bottom of the wall. The lights are also far too bright, and don’t shine light far enough. Hope this gave you some ideas.

I love it, looks good! SCP Hallway indeed. The lighting can be a bit bright so i’d tone it down a little bit. Maybe add some SCP posters on the walls? give it a little decoration but overall it looks good!

Since shelves would most likely not get used in a hallway, They would also not provide and help at all unless you want to sneak something out.

So shelves would most likely be placed in rooms rather than hallways.

Same with flowers, a secret government facility that houses dangerous anomalies would probably get used to hide certain information in it.

Pallets would be useless in a setting like this since I doubt the SCP Foundation would waste budget on decorations.

In a real life scenario It’ll probably only have a number to either the right side or left side of the wall to indicate what hallway it is.

And a few cameras and a map.

Even though it looks boring this is what a real secret hallway would look like. Since that is what OP is going for.

I agree with texturing it looks bland, Adding tiled floors and a few stains on the walls would make it less bland.

Thanks for feedback. The floor is tiled but as some other people said, the light is too bright.

I have remade this hallway many times, here is the current version: SCP LCZ Hallways

The hallway is absolutely sample, yet organized. I love it, keep up the great work!

Hello,
I’m afraid you are looking at the wrong hallway. As stated in an earlier post, there is a newer version of it. If you would like to see it, please check out the link mentioned in the earlier post.
Sorry for the incovenience.