It is seen that there is some misinformation and confusion in this post, probably because certain situations are not specified but I leave here a little of what I understand according to the pdf that Roblox provided us, mainly I focus on the use of avatars 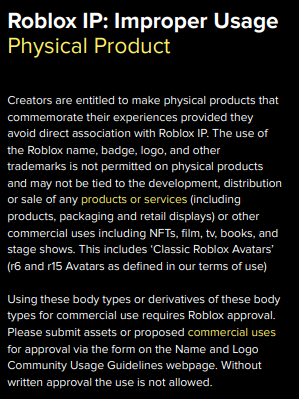 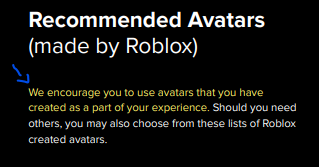 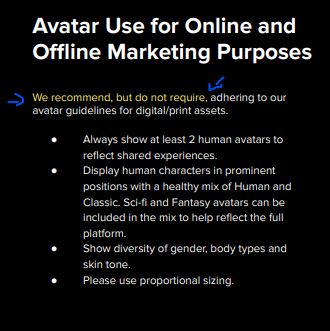 There are certain key words that help to understand what it means, however… this is what I understand it to mean, so “take it with a grain of salt”

Re-read the in-depth part. It says that if you heavily customize the “Classic R15” to the point it doesn’t “Look like the Classic R15” then you can use it. Still it is a pretty crappy update.

Just to clarify since this is a long post:
We can advertise off platform using RTHRO avatars but not R15(with an exception) and R6?
If your game is R6 or R15, are you not allowed to advertise it off-platform?

That is what they are saying, it seems they don’t want ROBLOX to be represented by blocky avatars anymore. It looks like they’re well on their way to discontinuing both R6 and R15 or at least showing signs of not wanting them anymore.

Roblox is just dooming their future as a whole. How do you people not understand after over 2 damn years that rthro is seen as a literal joke? You’re just dragging away players to fit more “modern” seeming interests that nobody gives a single crap about.

Another day another questionable policy change, just an average day as a roblox developer.

It is unfortunate that we constantly have to live with the uncertainty of some update ruining our ability to profit from this platform. We as developers are forced to be on the edge of adapting, not improving, but specifically designing games that appeal to the market and now games that appeal to ROBLOX themselves and how they want to represent their brand.

ROBLOX always finds a way to try to force you to use Rthro. Even in marketing this is becoming more of an issue.

Also, what? We can’t use ROBLOX’s own name for our ON-PLATFORM games anymore? Is that right? If so, this is incredibly absurd.

The day ROBLOX gets rid of the ability to use R6/R15 is the day I quit this platform. I like the aesthetic that has been hanging by a thread for several years now, and there’s no way I’m gonna abandon it.

It’s obvious that this platform is turning into a company like Disney, where they seem fun on the outside but are corporate businessmen driven by mostly money on the inside. Toontown sure got away with this idea in some form…

But, there’s no point in really arguing about this much. No matter how hard we protest and disagree with something, ROBLOX just won’t budge. We’d be lucky to get a single, transparent reply that would only answer a few questions.

What if July 1st’s hack was just against stuffs whole moment.

What once was a thriving platform has become so severely limited to the point that the slogan powering imagination is an insult. I feel nothing but disgust after this relentless push for rthro metaverse or whatever the current damn tech investor buzzword is, and now that we’re getting severely limited with the use of anything on this platform I feel no effort into making anything on here. Too much of a risk for the fruits of my labor to be swept away.

The restrictions are around off-platform commercial use (making products or doing something like a TV show that has characters that look like our R6 avatar type). Like some folks have speculated in the thread, this is to protect Roblox IP and association with commercial products not created by Roblox. The classic R6-style avatar is iconic, but R15 and Rthro bodies are more customizable and less recognizable.

What’s going to happen to Roblox toys that are R6?

The classic R6-style avatar is iconic, but R15 and Rthro bodies are more customizable and less recognizable.

Wouldn’t this draw less attention to the Roblox platform and another persons off-platform commercial use?

A lot of players on the platform new or old have a liking to mostly R6 avatars, with R15 and Rthro following, so wouldn’t you want to have R6 Avatars since their more iconic and recognizable?

And even though Rthro ( and R15 kinda ) have more customization, why would you want us to use Rthro and R15 avatars to advertise your game or merchandise off platform? Rthro is the most unappealing avatar type on Roblox anyway, so wouldn’t this not be beneficial to the creator?

Also, even though it says, “but do not require” still gives a bad taste in my mouth, because they say “We recommend” as if their going to take action against our assets.

Same with the second one saying that they “encourage us” to use avatars that we have made, what is the point in using them when they don’t even want the consumers to really see classic R6 or R15 avatars but have at least 2 human avatars that need to be the most viewable character in the advertisement, they never clarify how many R6 or R15 avatars we can have and were they can be in the advertisement.

I could fully understand the first part about protecting their IP, but the second and third images seem forceful, and a bit demanding.

As a indie developer, this kills any encouragement I had using and recommending Roblox.
A lot of these new guidelines don’t even feel like they make sense. Why aren’t we allowed to use R6 blocky characters to advertise? Why are we forced to use Rthro AGAIN when most of the Roblox Community has made it loud and clear that they don’t care for it? Why are you killing your platform? Please adjust some of these changes. The name rule for games feel ridiculous considering they are games on your platform, the render rules feel ridiculous, the “On Roblox” badge is whatever but still.

This is doing way more harm than good and is just making things complicated. Stop limiting and restricting the people who are keeping your platform alive.

If thats in violation of your contract couldnt you sue?

Like @Heimskeet said, shouldn’t you be able to sue if they just abandoned your contract? I understand that you may not be able to from a practical standpoint given your position as a developer (roblox could end your right to devex etc) , but in any case, isn’t that illegal? You’re not the only person I’ve seen not be paid out for participation in the program

Only field and environments are safe to bloadcast in ADs, isn’t it?

Who does this update benefit? That’s what I’m genuinely curious about. Who were you thinking of before this update was pushed? Your mainstream playerbase? Your top developers? How does this new update entice anyone to advertise their game off of Roblox?

At this point, it’d be less of a hassle to not advertise your game on other websites at all. At least then you wouldn’t have to worry about violating these new guidelines.

Additionally, what’s with the Rthro push (again)? Your team can barely make them function to begin with. They don’t display well in R6 games, old Accessories and Gear don’t work with them, and the backlash against them is still going on to this day, five years after they were first revealed at RDC back in 2017. How many developers push games that support them? I guarantee you, the number is a lot less than you think, with more developers choosing not to have Rthro in their games.

We want the IP of your experiences to be able to grow, thrive, and have their own strong recognition separate from the Roblox brand.

Trust me, if developers wanted that, they would take their projects and ideas, and move them off of Roblox, and onto other websites.

This “badge” your RECOMMENDED TO USE isn’t mandatory, which means you dont have to use it. Its for commercial purposes only, like your games or clothing youve made on roblox. Its only for offsite purposes.

The badge is the one that has roblox icon

You can still use r6/r15 in your youtube thumbnails IF ITS NOT AN FULL ADVERTISEMENT.
Advertisement and content are different.

The toys (stars) program is gone

Out of serial code, isn’t it?
…Only robux code exists in real life right now.

Ro-Citizens and Blox-Fruits are not gonna be removed because, as stated in the original topic, it started the day of the update.

If that’s not copied by faker.

So many people don’t understand legaleese which is making this a hard update to understand, and many of you are blowing up with excuses for roblox pushing RTHRO which isn’t even close to what this update is doing. Also, RTHRO is R15, so please, stop being ignorant.

This update is tightening their Intellectual Properties and copyright in a time where many things become more blurred daily. We’ve just experienced one of roblox’s major IP violations of all time with the collective music industry suing Roblox.

Roblox is not erasing R6/R15, however, it’s not their business model anymore. They’re focused on new things and leaving these avatar styles to their community for UGC. It’s not totally a bad thing.

This isn’t me disagreeing with their tightening use of “blox” or “ro” as they do not own the trademarks for the prefix “ro” or the suffix “blox” in gaming (Also, yes, roblox owns the trademark to Despacito Spider.) 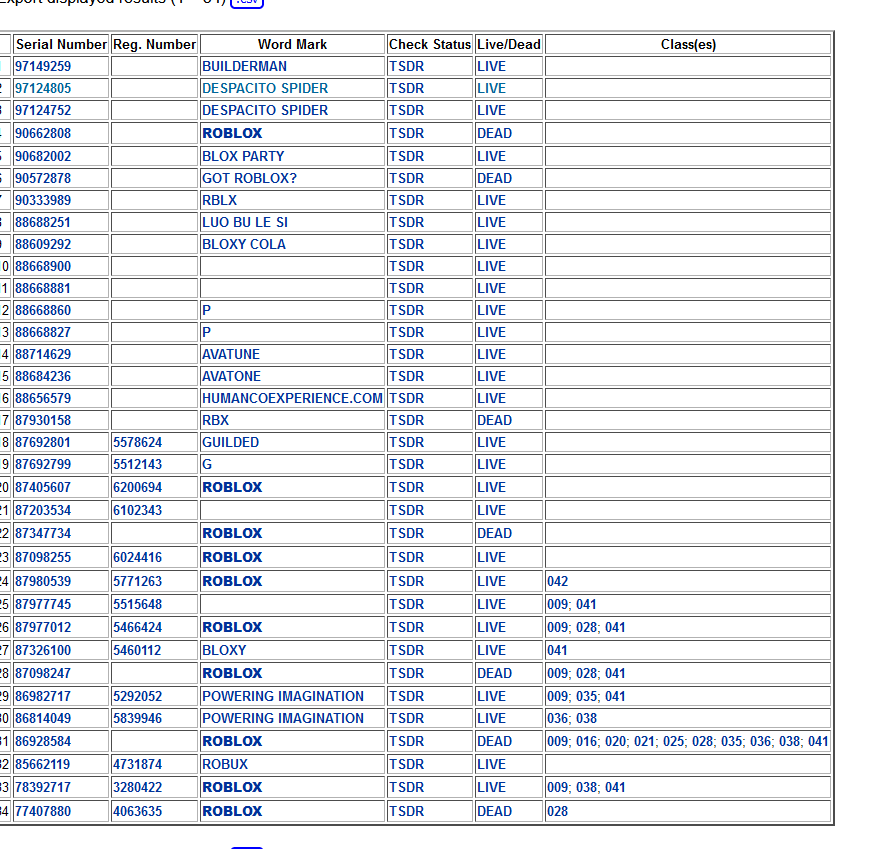 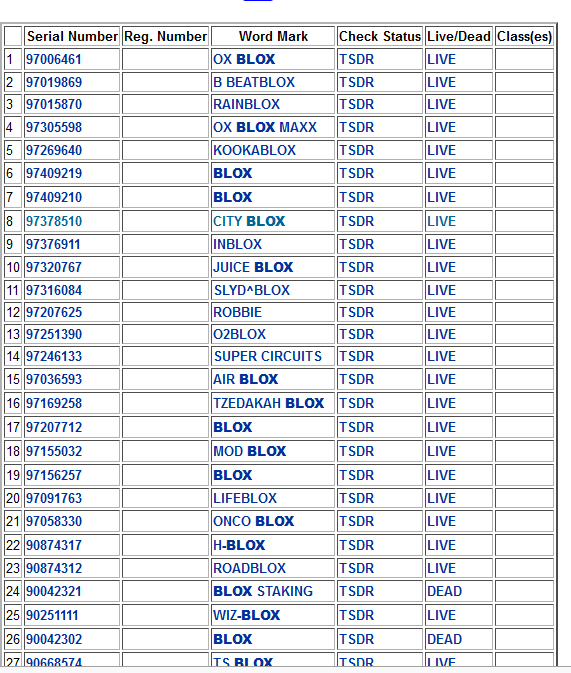 I do find a major flaw with them doing this on the platform, but what can we do?