The current class icons in studio are a bit dated compared to the rest of the UI in Roblox Studio. They currently look like this in Studio: 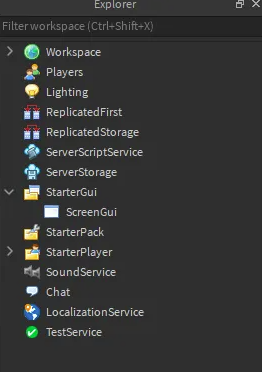 With the use of @maximum_adhd’s mod manager and @Elttob’s Vanilla Icon set, you can update your icons to a more modern look that matches the rest of Roblox Studio’s UI:

The downside to doing this is that you must use a third party app and it isn’t support by Roblox. New Roblox Studio updates also revert the changes made to the icons and are not automatically updated.
The class icons are in need of an update with the current UI direction of Roblox Studio. What better than teaming up with Elttob and using their modern design or just completely overhauling the current icons to match.

I’m also interested in hearing about other users’ input on the current class icons!

I desperately want to see an icon and graphics overhaul for Studio. Not just for class icons, but for all major icons.

The silk icons from famfamfam have served exceptionally well but they are a major contributor to the perceived jank of Studio (i.e. they give off the impression Studio belongs on a Windows XP computer from a decade ago). Notepad++ uses the same exact icons and has the same janky feeling that Studio does.

It is long overdue for Studio to see an icon refresh and consistency update. Definitely suggest talking with Elttob. They’ve done some really awesome work doing designs for all of Studio’s UI.

I think it’s rare that new classes are added, so I don’t think replacing the class icons with in-house versions would be too prohibitive with respect to the need to design new icons in-house too.

I’ve requested this at least a dozen times over the past 4-5 years. It’s part of the reason why I added a dedicated widget for it in my mod manager to begin with. Roblox’s default icons are shabby and in desperate need of attention and care.

When I was working on the DevHub I wanted to have class icons for the objects, but they were so ugly and out of place compared to everything else that we couldn’t agree to having them on the site.

Maybe this year we’ll finally have the push we need to see it happen?
(cc @GeneralRelish)

I think it goes without saying that I support this

I’d happily offer my services for an official icon redesign - I’d even be willing to negotiate if Roblox wants to use or build upon Vanilla (whether as a default or an extra option).

Something I will mention though is that Studio might need better in-built support for changing icon colours/icon sheets based on light/dark theme for smooth integration, and possibly some way of supporting higher resolution icons so high DPI screens can take full advantage of the icons being designed in vector format rather than raster