I just launched a new update for my game and watched this appear in my feed:

Here’s the problem: “Base Radio” is a gamepass. Under normal conditions, a gamepass can only be purchased once. it is possible to purchase a gamepass again if you delete it from your Roblox inventory, but this user purchased the gamepass twice in incredibly quick succession.

There are many purchases in my game and my group feed is spammed by free model purchases. Both of this user’s transactions likely happened within 10 seconds of each other, ruling out the possibility of the user intentionally purchasing it twice.

This leads me to ask, did this user just lose 200 robux? I have gotten countless messages, as I’m sure other developers have, of users purchasing passes and not actually receiving them (and losing their robux). There’s not much we can do as developers in this scenario, as gamepasses are handled by Roblox. But I’ve gotten too many of these PM’s (some quite angry, accusing me of being a scammer because they did not receive their gamepass) to rule out the idea of a serious bug being the potential cause of these messages.

I don’t really have much to add, besides requesting that an engineer take a look at this specific transaction to see what happened. Hopefully this was just a website bug and the poor user wasn’t actually charged twice.

Edit: the user has messages turned off, so I wasn’t able to message them. However, I found this on their profile:

The gamepass costs 200 robux. I’m officially pulling out the [ROBLOXCRITICAL] tag. If I stumbled onto this by chance when looking at my feed, then it must be happening to other users as well.

Edit 2: and I am now officially putting away the critical tag. I have since found another example of a double spend, which suggests that this issue warrants urgent investigation regardless

Does CRITICAL work the same as ROBLOXCRITICAL?

I’m not sure the tag does anything except get the attention of anyone who sees the post. I’ll change it anyway to avoid confusion though.

Thanks for bringing this to our attention. Looking into it now.

Please let us know if anyone else is seeing this issue.

I’m not sure if it specifically does anything, but it seems too specific to not seem like its hooked up to something.

https://devforum.roblox.com/t/official-rules-of-the-roblox-developer-forum/46429 Why did you mark this as ROBLOXCRITICAL? Because this sounds like the exact opposite of what constitutes a critical bug.

I recently got scolded for using ROBLOXCRITICAL in my bug report where I wasn’t able to upload anything to the site for a whole hour. Apparently the tag is only for dire emergencies that affect more than one person (with proof), even if it’s pretty bad. Just for future reference.

I’ll just say right now before we get anymore else on this to stay on topic.

Apparently the tag is only for dire emergencies that affect more than one person, even if it’s pretty bad.

Think of ROBLOXCRITICAL like this: Would you wake up an engineer at 4am to tell them about it? If not, the bug probably isn’t critical enough. It’s for alerting staff of major issues that threaten the platform as a whole.

Unless @berezaa has found this is happening with more than one user, it shouldn’t have the critical tag either. (Although this is insanely hard to verify due to the lack of sales searching).

I have gotten countless messages, as I’m sure other developers have, of users purchasing passes and not actually receiving them (and losing their robux). There’s not much we can do as developers in this scenario, as gamepasses are handled by Roblox.

We also get a lot of these PMs which we usually assume are fake, but even if we didn’t, we can’t do anything because developers don’t have the tools to verify/refund/anything purchases. We QA our purchase system frequently and everything works in every environment we test.

Unless @berezaa has found this is happening with more than one user, it shouldn’t have the critical tag either. (Although this is insanely hard to verify due to the lack of sales searching).

Yeah this is the big thing. I noticed that there was a double spend right at the top of my feed. It is impossible for me to search my feed for more occurrences because like 100 people take my free damned model a minute and I can’t filter that out of my feed.

I’m assuming that this is decently widespread and that a lot of money is being lost here. That was the reasoning behind the critical tag. In my opinion anything that involves real world money needs to be highest priority. If this was an incorrect usage of the tag @Nightgaladeld please let me know and I’ll be more careful with it in the future.

Unfortunately we do not have any specifics for the current issue in the Roblox Critical rules but I do agree that we should look more into possibly including it in the future as it could be a serious issue. Including @CodeWriter into the discussion who helps us manage those rules.

Another issue is that we are unable to fully confirm if the impacted user lost robux due to the double purchase or identifying other impacted users by this. We have sent out an email to the right folks internally who will be able to help us out with the investigation. We will update this thread as we receive more information.

Steps to Report a Bug

If you have a critical bug that urgently needs to be investigated, start your post with the phrase “ROBLOXCRITICAL”. This is used to alert admins right away to the issue. A critical bug must satisfy at least one of the following criteria:

A reproducible crash (Studio, game or website shutting down or returning a fatal error 100% of the time when a set of steps are followed)
Loss of data (either through Data Stores or Data Persistance)
Exploits
Preventing all players from connecting to a game and affecting multiple Roblox games.

I have since found evidence that this has happened to a second user. It’s difficult to find these in the logs but I will keep looking.

I just checked the sales history for Robloxian Highschool and found one instance of a potential double purchase:

Their messages are also disabled and so I can’t verify that this wasn’t simply a delete + rebuy, but with the volume of sales it seems unlikely.

I went back a lot further and this was the only instance I could spot.

I only had to scroll down like a minute to find an instance of a double purchase on one of my game passes. User also has messages turned off.

Update:
I just refreshed the page, and now the second purchase isn’t there. Maybe it’s just a visual bug?

After reviewing each transaction carefully, we have concluded that this is a display bug which has been reported internally and will be investigated by engineering. All of the users involved did not have double purchases in their transaction history and only seems to be displayed on the developers side. Thank you to everyone who actively helped us with the investigation.

Hey, I got the same issue and a youtuber was purchasing a gamepass in my game Dog Simulator

I realized this was posted almost 2 years ago, but this has happened again…

You’ll see he purchases the Extra Slots gamepass, this gives you +2 slots for the Pickups Inventory, and roblox asked him to buy it again when prompted, thinking he’d get more space, but this is not the case.

Video Evidence: Video Link (YouTube)
I also see it asked him to purchase a ‘Product’ however this is a gamepass

However, when I check the Transactions, this seems to not show up… 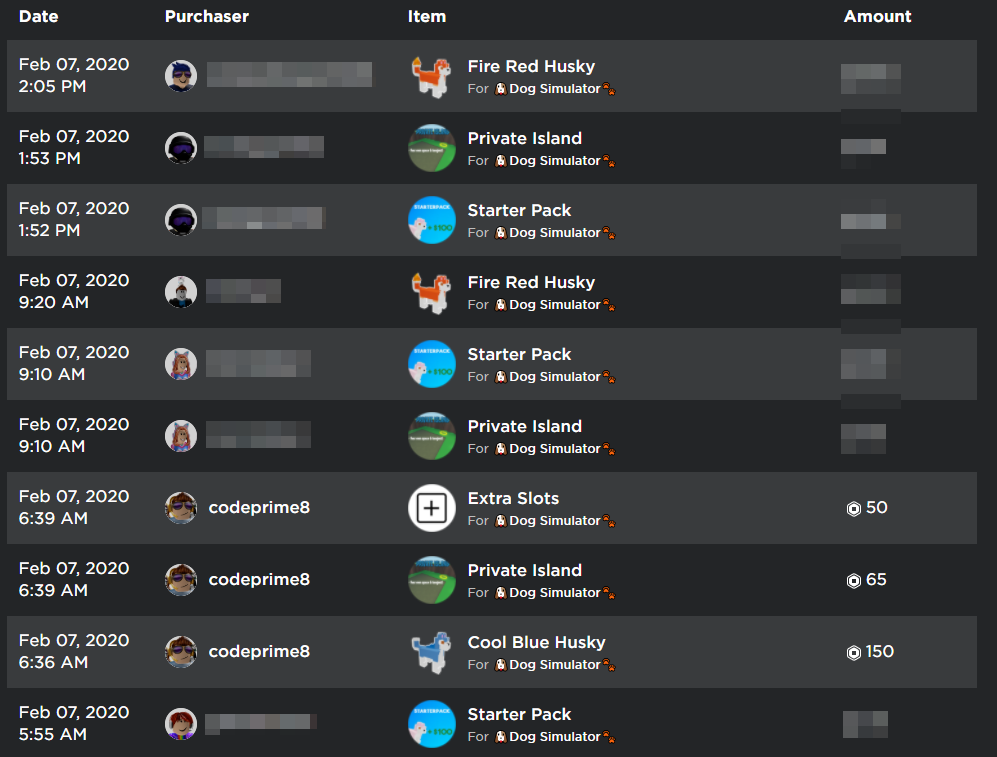 Hey, following @AspectType’s post, I had the same exact issue pop up with another user. I waited three days to see if the automatic three-day processing period would return the Robux, but it never did according to the user.

Here’s the client’s purchase history (the user has stated that they are okay with their username / profile being used in this report): 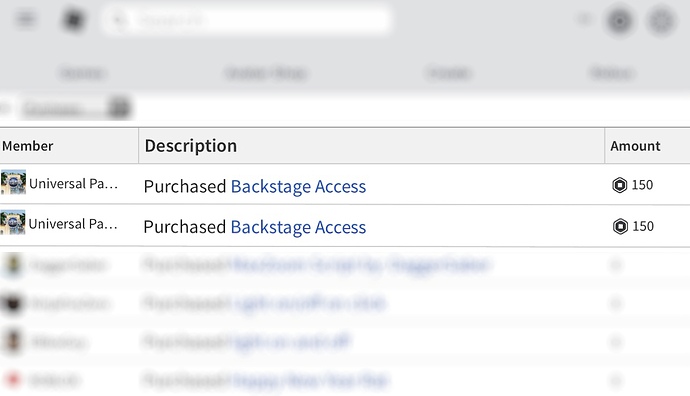 As you can see, they have two purchased of the same gamepass …

In our group purchase history, only one gamepass is said to have been purchased: 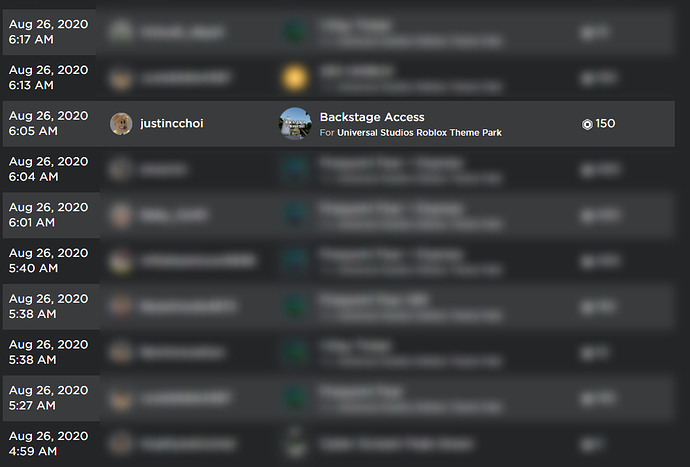 When the user contacted Customer Support, they were unable to get a viable response, and were redirected to the game developer to help them:

Hello Justin,
Thank you for contacting Roblox Customer Support. The features that a game offers via passes, in-game purchases, or with a game in general are determined and maintained by the game developer and not by Roblox. These purchases are non-refundable through Roblox. However, we do recommend that you contact the developer to let them know about the issue you’re experiencing. If you are seeing anything inappropriate on the site or that otherwise breaks the rules, please don’t hesitate to use the Report Abuse feature.
Remember, Roblox has millions of different games to play, so you can always find one you like or even build your own!
Sincerely,
Tricky

Not sure why they would redirect to us about a double-gamepass purchased, but what do I know

To follow up on @Dapale’s post, the duplication was a legitimate duplication. Unlike earlier posts on the thread, the user has been charged for both transactions rather than it being an explicit display bug on the Roblox website. If necessary, we can move the thread to a separate post instead.