What are some good tips for building?

I haven’t really built any aspect of a game since probably early 2016. The “best” build I ever made was around then, and it looked like this: 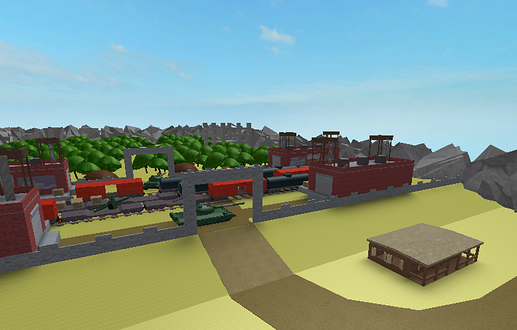 I’d say in general I’m not a very good builder, and my style is pretty blocky, which would be fine if we were still pre-2015. Most of the games I’ve worked on didn’t require detailed builds/I hired people out to do the builds, like my friends.

As a personal development project I’m working on revamping a really, really old game of mine. It was my first game to go front page back in 2010-2012, and a lot my really good internet friends were met through it. I’m using this opportunity to actually build my own game for once and not make it look like crap.

I’m aiming for a low-poly, colorful build, similar to those seen in simulators and the such, like this:

I know some CSG has been done in those pics, but it seems like everything else was done by hand.

Are there any resources, like plugins, videos, tips, etc., that I should be aware of to build decently/in this style?

Tbh, I don’t want to add terrain. With the style I want to go with it doesn’t seem to really match, plus terrain could cause a lot of lag for some players, and I’m trying to make the game very mobile and xbox friendly.

I know this is hidden but just to make sure no one else is confused, those screenshots are NOT mine. They are screenshots of someone else’s work as an example of what I want to do, but can’t really do right now.

The first image is indeed mine, and I don’t really consider it that good, even for 5 years ago (can’t believe its been that long now…), and I really doubt I could replicate something that like that again since I really haven’t build since then either, lol

First of all, it depends on how you choose to build. Some players prefer using 3D Modelling softwares like Blender and others prefer Roblox Studio. That is entirely up to you.

Secondly if you choose for example Roblox Studio, having a set of good Plugins can hugely help: https://www.youtube.com/watch?v=xetumvq05DQ

Also just using reference images when developing and creativity. Having in mind a good idea and how you want to apply it always helps out loads.

This is a quite simple style to achieve cartoony colorful looks could be created in variety of softwares it mainly involves around using Blender - C4D. I personally prefer Blender it’ll take time learning the workflow and ropes around it.

Low poly isn’t a style it just refers to using a low amount of polygons, since your wanting a more cartoony look the examples shown are mainly created in an external software and studio itself. It really depends on if your willing to learn variety of softwares to accomplish this theme there’s lots of builds actual games that feature this same theme and all created in studio itself.

However this can be created using smooth plastic, vibrant colors, and the use of lighting to reflect those colors. You’ll need to learn how to use Blender to export your models inside studio using “Meshparts”.

Hello! Today we are gonna cover on how to make low-poly builds like these [LOW%20POLY%20SHOWCASE] What is low-poly? Low poly means Low polygon (count), so basically in Roblox that would translate to less bricks. Gives more of a cartoony sort of feel. With Blender that would literally mean low polygon count in terms of the “mesh” of the model.

What I do is, visit games, watch youtube, or even create small stuff. I started out making simple stuff like Roads, Buildings, Trees. Try doing that than go make more complex items.

I have two main suggestions. My first suggestion is to learn how to build better in Roblox, which is somewhat easy if you look at tutorials and study other people’s buildings. But my second, and maybe more important suggestion, is to look for inspiration in pictures, 3D models, and other people’s games. For example, it’s not difficult to find pictures of low-poly islands, houses, plants, et cetera. Pictures like this can be very useful if you want to figure out your vision. It can give you ideas about possible decor, props, and landscaping as well. 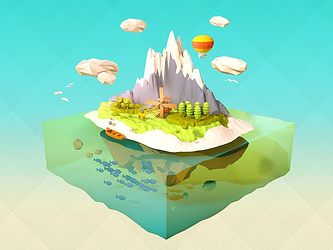 Try using this plugin to get down the terrain around those kind of maps, helps me loads.
https://www.roblox.com/library/4482617278/Terrain-Mesher