Hello! Today we are gonna cover on how to make low-poly builds like these 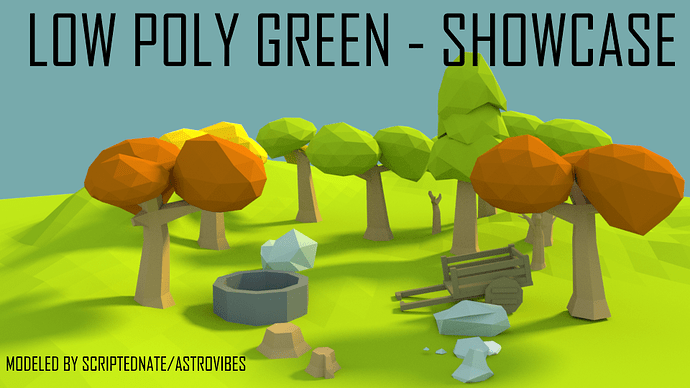 Low poly means Low polygon (count), so basically in Roblox that would translate to less bricks. Gives more of a cartoony sort of feel. With Blender that would literally mean low polygon count in terms of the “mesh” of the model.

I’m gonna update this topic frequently, gonna add more tutorials on this one

P.S If you do not know how to use blender properly, you can use this!

266 Likes
Do u guys like my first low poly?
Low Poly building
[BUILDING] Tips for building
Blender Basics And Export Guide
Has anybody actually been promoted?
Blender Development Resources
I want to get into Modelling on Blender where do I start?
I need help with low poly builds
Need Help On How To Make A Low Poly Car
Any tips for Poly Building?
Terrain / Map making?
How would I begin low poly building?
The Beginners Guide To All Things Game Development
Links to Useful DevForum Posts About Blender
What are some good tips for building?
General tips and advice when it comes to low poly builds?
How do I build these hills type of things?
(FEEDBACK) My first small Grocery Store
I need a full tutorial on 3D Modelling
Feedback on Builds
I need help with low poly builds
How to make low poly look
Ezzzyy (Willow) March 31, 2019, 12:15am #4

Thank you! This is a really great tutorial

Very useful tutorial, especially when you have barely any experience in blender.

My computer is having trouble installing blender, But hey… you did a good job on this tutorial, I can’t wait to see more! I even bookmarked this topic so I can find it again with ease…

EDIT: Maybe you can make a tutorial on how to make a car?

Thank you! I will try my best to help you guys.

Nice tutorial. Quick question, on the colored mesh, how did you color the top portion to orange? Did you just create another object and placed it on top, or is there a way to grab a hold of the top portion of the model and color it?

What I did was: I duplicated the mesh and resized + recolored it to fit there.

This man just told me how to use Blender.
And it worked well.
Props to you

That’s a really terrible idea. Instead you should export parts of your mesh separately or use a colour palette texture and UV map your mesh around it.

Is this kind of functionality possible in Cinema4D? My PC is too crap to run Blender, and Cinema4D is one of the only mesh softwares out there that works well with low-end PCs. (Created somewhere in the 90s)

Yes it is possible to make low poly with cinema4d (sorry for the late answer.)

Great Tutorial, really needed. Could you do one on 3D modeling?

Erm, I might do one, it depends though on which topic as this is also how to model low poly.
We will see though ^^

Amazing, although it’s a little outdated if you have the general concept/knowledge you’ll be able to understand this tutorial. Maybe you can make one with Blender 2.8

Building onto this. Many people love to create separate low poly items and import them into the game. While that has become the standard, I’ve actually found it easier to build a kit (of sorts) that contains basic low poly meshes. I use these meshes to build stuff in studio. I found the process to be easier and less painless. Nice tutorial.

Very useful, I am not a beginner but it Helped out my bro. Ty

This is why the knife tool is my fav

I wish I came here when I started modeling i would learn much faster lol.