As a developer, how do you plan your games?

I follow a similar principle to yours. When initially starting a project, I’ll write down everything I can think of, including ideas, tasks to complete, people to contact, etc. Something like this: 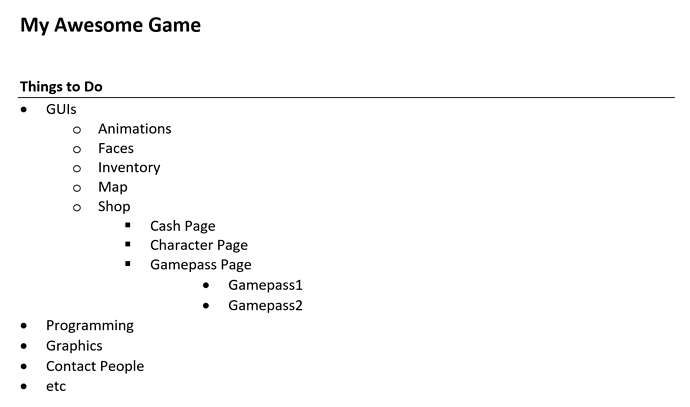 Overtime I always find myself expanding on this list, adding in ideas and notes that pop up along the way.

Having another person or even a team of people to bounce your ideas off is also really useful. I’m fortunate enough to have a twin, but it can literally be family, other developers or even friends you met online. This adds a second perspective to your project, enabling you to create, adapt and knock-down ideas you initially wouldn’t have done by yourself.

Usually I’ll just make a standalone prototype of a concept then forget about it.

However for full game designs, I’ll instantiate a script into the explorer root with;

Then write the code concept, dependencies, links, interactions, mechanics, guis, etc in this script in a format similar to @ForeverHD, which works well if I’m in a team create session.

In team create I may also write a second script for development logs or to do list.

This actually gave me an idea for a Plugin…

Would anyone use a trello style Plugin for managing projects?
Trello with a Kanban page sounds useful.

Why do you use the command line to insert a new script?

In order to insert it as a descendant of game, not workspace or server script service.
As you can’t directly create a script on the root. Only descendants.

Makes it easier to find and identify.

There’s actually a whole thread about this topic here:

As a builder, how do you plan your builds? Building Support

To add onto the very helpful posts above, anything artistic has multiple techniques and preferences. I tend to plan out (greybox) my world building before getting into the nitty-gritty. [FlightLobby01] [image] [image] But I know others that just start at one section and start world building and it comes out just as good. So it really comes down to preference and practice. Though I will mention that greyboxing it much more standard for groups and teams, since everyone knows what’s going on. …

Oh I see, clever, although I usually put these kind of things in ServerStorage.

These are some of the things I do when preparing a map or a game. It really depends on what game you want to make.

Best of luck to you and your creation!

Don’t want to rain on your parade but this topic has been discussed multiple times before- make sure you search for existing threads.

Here are similar threads to this:
https://devforum.roblox.com/t/how-do-you-make-your-game-plan/18700

New Article: Game Design Theory: Project Management with DevOps, Analytics and Pipelines for Successful Games and Productive Teams Disclaimer Not all games take the same design process, and consumers are always moving on to new things, you should take it upon yourself to research the market you are entering and taking what you learn from this as pointers to how to apply what you find and study. These concepts do not nessecarily apply to Roblox but game design in general that can be used out…

I have planning that is a long shot.

Of course, I have never executed the plan yet. It is the current idea I have. If you have something to add, I’ll edit the post.

In a nutshell, it’s a basic skeleton for how to develop your game.

I am familar with all these, other threads, but I want to know about YOU plan your games

The way I plan is by writing my ideas on a whiteboard, this way I can visually see the ideas all in one place.

Next I choose what is and is not possible and put them in will do and wishlist lists.

Once i know what i will do i then map out how i will do those things so i don’t get stuck; i then work on said things and if i get stuck i go back to the whiteboard to see what i missed.

This was just my way of making it work for me, and maybe it can be useful.

Planning? Psh who even does that.

Jk, this might seem odd, but I go and take a shower. While in the shower I normally plan the whole game out in my mind. I think of the modules that I will need, and the organization. I think of important
features that I want to add. Once out of the shower I message multiple friends about the idea and features. I do this so I don’t forget anything and so I can get some approval about the idea to see if it’s a good one. After that I just get to work.

Yes, indeed great ideas do certainly come from the strangest of places

After thinking of a concept for a game I spend a day or two brainstorming and keeping track of every idea that comes to mind via Trello, then I sort them out and begin working from there once I have a complete idea of what the game will be like.

To be honest I build all around the place. I normally do build the base part of the terrain first and work from there. After I build everything I need I switch it all up to make it fit and look better. Pretty simple process for me heh.

I sort of visualize the whole game in my head and make it come to life, I start by creating the data template so I can get an idea for how the server will handle everything, then I start working on the client so that everything is interactive while making sure I put slight obstacles in the game in which it can be paid to bypass.

cheers for this, really helped me to think about a upcoming project I have

Hi I’m a little late to this Prompt: This topic was last replied to 12 months ago.

I left a reply that would be relevant in another thread semi-similar to this one.

How can i planify the making of my game? Game Design Support

Here’s how I do it: Step 1: Think of a game idea. Don’t overthink it. You don’t necessarily need a giant game. You may even want to keep it simple. Perhaps, try thinking of a game that you think would be really cool, but can’t find it anywhere on the Roblox website. Two most important principles: 1) Make sure it’s something you would want to play, you will enjoy developing, and won’t lose interest in. 2) Don’t bite off more than you can chew. If your typical game is a ffa, non-round based swor…