The Problem
Westover Islands has been plagued by a slew of connection issues upon joining the game that those affected say doesn’t happen at any other game. After researching the problem with my community it appears that it mostly affects Windows users. There doesn’t appear to be any specific OS version that deals with this.

I had a friend join the game knowing that he experienced this issue incessantly. The client successfully connected to the game long enough for my own client scripts to successfully boot themselves, but the server inevitably kicked him a moment later and left this in his log files:

Frequency
This issue does not occur for all Windows users, and for those it does affect the frequency varies drastically. I’ve personally experienced it on a few rare occasions, but most people I talked to say that it happens every time they join my game and that they need to rejoin “3-20 times” before they successfully connect. For those it affects, it’s a massive deterrence to spend time at my games and it’s driving my player counts down.

Repro
I personally cannot reproduce this error myself, as it really appears to only affect random machines.

Duration of Bug
I reported something similar to this all the way back in August. From what I remember, my current problems are similar to what I was dealing with then only far more pervasive.

Sample Specs
Here’s a sampling of specs from people that were experiencing this, you can find a lot more
here.

The variance in specs leads me to believe this isn’t a spec issue, but hey.

I could really use any assistance I can get, this issue is driving my game’s traffic downward and I have no idea how to solve it.
Thanks!

12 Likes
How do I stop the server from kicking players trying to join
A lot of my players get auto-kicked by server on join
Game too big to load - what to do?
CaptainMarcin (CaptainMarcin) February 2, 2018, 7:56pm #2

Hello. Since October 2017, I’ve been receiving reports from many people who are unable to join my game (https://www.roblox.com/games/691884101/Dynamic-Ship-Simulator-III). From what I’ve heard, they usually lose connection in less than 30 seconds after joining, with a message “Kicked by server. Please close and rejoin another game”. Sometimes they have to connect more than 10 times to actually play the game.

I’ve spent a lot of time trying to figure out what’s causing it, but without success (changed the admin script, scanned the entire place to see if there is any script which can kick players like this).

Normally I wouldn’t post this problem here, but my game has an access fee so many people who get kicked on join simply leave a dislike because they “waste” money, which has a bad effect on my rating.
I personally never experience this problem on my PC, but it happened very frequently when I used a weaker laptop (not really weak, 4 gigs of RAM).

I assume this is a Roblox issue, because I couldn’t find any other reason which would make sense.
Here’s an example: https://twitter.com/wu_kevin2004_wu/status/958207007764316160
Has anyone else ever experienced this on any game?

This issue is still drastically affecting my game’s and other games’ traffic. We need a fix for this.

Have you gotten any reports of this issue today? There was a configuration change that might have affected this.

I last received a Discord report about the issue at 4:40PM EST and based on feedback I’m receiving on Twitter it is not fixed (provided the respondents actually read where I clarified the timeframe). A few people I talked to indicated that they were no longer having problems and I did see an improvement in average visit length of nearly two whole minutes between yesterday and today, but it doesn’t seem like the fix is working for everyone. I guess I’ll see tomorrow if the Discord reports continue to flow in.

I haven’t heard anything too recently, but I’ve had constant reports about similar issues with my games as well.

This is affecting my game as well today, I’ve gotten reports from people being randomly kicked, so I went to look for myself. The entire server kept getting kicked every few minutes…

I’m not able to shutdown the ‘kicked’ servers either, so people keep joining those servers to eventually get kicked again

Happens fairly frequently in my game as well. It’s been like that for so long most people know to just rejoin.

I’m still receiving reports of this, whatever change was made doesn’t seem to have fixed it.

Anyone know what causes this?

My game recently just surpassed 40k part count and I started getting reports of the same issue. I myself experienced a few times as well

I’ve always got this on Bakery Tycoon, after about 10-12 minutes most players are kicked with the same message.

As of the writing of this, it happened again…This is my 6th attempt to join my own game. Some days it doesn’t occur, but once it does, it usually takes ridiculous amount of times of rejoining to be able to join the game. 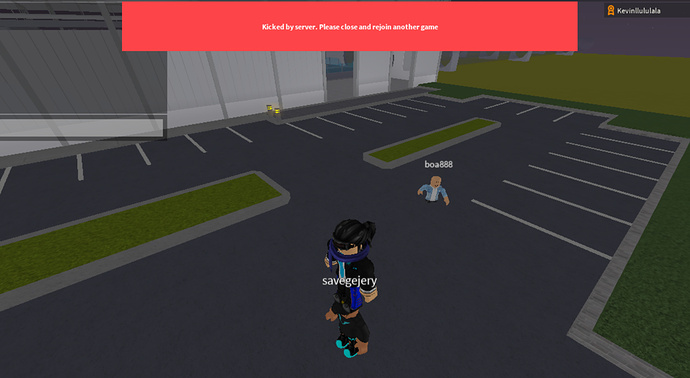 Been getting support tickets from people claiming they lost purchases and what not in phantom forces because of connection lost issues, and verified it, so servers crashing and not saving may be the issue

I do not recieve these issues on a Mac or a Tablet which leaves me to believe, I know this sounds very farfetched but…

Is it an issue with Windows OS?

I made a brand new place with only one script that I made (no loops or anything, completely short O(1) code), and I joined and I got this.

EDIT: This has happened 14 times in the past ten minutes, on several different games that I can guarantee have no malicious scripts in them. This is beyond infuriating.

UPDATE: Counting, I’ve gotten this message 44 times in an hour.