As a roblox developer, it’s currently too hard to present my game to a specific audience. I think a good solution for this would be too look at the platform Steam. Steam has tags that allow users to quickly surf through the enormous database of games on the platform. If you’re unfamiliar, they look a bit like this: 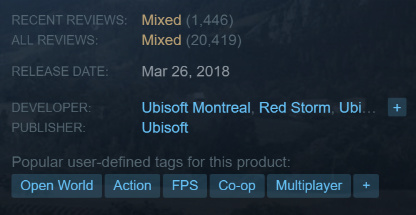 Those were taken from FarCry 5.

Basically, roblox already has reviews (upvote / downvote) but there isn’t a way to tag a game with user-defined tags. I think this would be very useful for developers to be discovered because many times, players are only searching the site for new FPS games (for example) or Open world games. Nowhere, aside from the description, can the developer set these tags for his game. The closest thing to that at the moment would be the genre, which doesn’t stand out much and is too broad to search for. Not only this, but the genre feature only allows one tag which is nowhere near enough specification for someone to easily find your game. Thanks!
-big

Yes I agree. This would be a great idea. They used to have something similar called a genre, like medieval, fps, town and city, etc. But there aren’t a lot of choices though. Perhaps in the future roblox will let us create our own tags?

This would be a great feature that replaced the old genre system. However, fear the stupid bots whoever user makes, they’ll mess it up.

Otherwise, it’ll be a great replacement from it and… filtering the tags?

This would also provide an opportunity for Roblox to update their search engine, and also could solve the issue of users putting millions of tags into asset descriptions and hogging unrelated search results.

However, on that note, I think there should still be a limit on how many can be put on 1 item. Maybe like 10 developer-set tags?
I’m not sure if it would be a good idea to give player-defined tags, simply because of botting and stuff.

If filtering is an issue, we could have it so there is a massive list of pre-written tags that work similar to the already-used tags here on the Developer Forum. If new tags need to be added, we could have a thread on here for suggestions.

This would keep duplicate, typoed and otherwise invalid tags from being issue, but would also restrict our options (although if the suggestions thread and the vanilla tag list are good, this won’t be a big issue).

A massive list of pre-made tags would also help with search results because it would prevent people from making fake tags (such as the name of the game or something) and also it would prevent typos from becoming a thing (so for example open-world wouldn’t yield different results than open world.)

As a Roblox developer, it is currently impossible to set a genre to my team’s game in such a way that it connects players looking for that genre to the game.
As a Roblox player, it is currently impossible to search for / seek out Roblox games by genre.
The previous genre system that existed on Roblox for many years was extremely limiting to the creativity and imagination of the developers and game designers, this is not a post that is advocating for the return of the pre-curated genres.

Instead, this is advocating for “User generated tags” for games, where the user votes and therefore generates the top tags for any given game.

I ran an experiment. I produced a list of terms for my game that I think described the gameplay.
Then I linked it to the game’s communities and they voted on what they believed to be the top 5 tag words for the game. 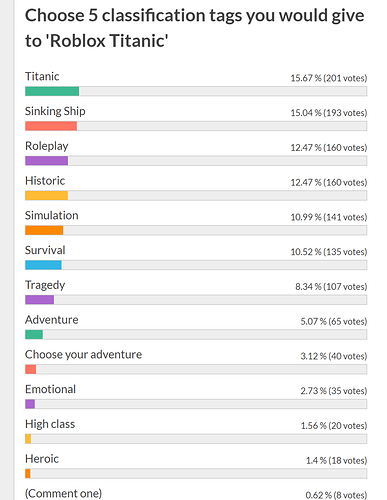 image1214×1568 83.5 KB
The top 5 tags according to a large sample size, were 'Titanic", “Sinking Ship”, “Roleplay”, “Historic”, “Simulation”. Those 5 tags would be a way to connect players specifically searching out those tags to easily view the game, rather than using the Roblox search, or scrolling through the liquid games page for several minutes. As more games are produced and crowd the games page, this will become more important.

The following picture is a concept for how players search for games by genre. Stemming from the success of the liquid games page, this is the liquid genres page. The most populous game of the genre could get the icon for the genre, (perhaps add something to differentiate the icon so players don’t think it goes straight to that game). When you click on the genre/icon, it shows a liquid version of the games page with games tagged by that genre, sorted by how many votes the game has for that genre OR how popular the game is within that genre. There could be multiple way to search within the genre search section of the games page, which is why I added a “(Most Popular)” differentiation. 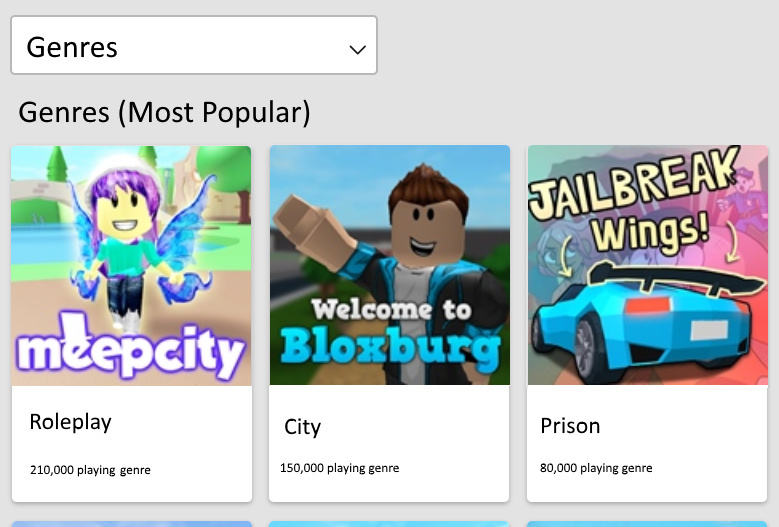 If Roblox is able to address the issue of game genres, it could improve average visit length and player retention as players look through genres on the games page to find some games of their favorite genres, instead of wasting time playing something to figure out it was not what they were looking to play.

User generated tags for genres with an integrated genre search sort would improve Roblox and create a more professional environment for developers.

I mostly agree,
I would want the most popular tag to appear though. It would be annoying to have a ton of Genere that have 1 or 2 games. The Titanic game should fall under, “Simulation” for example. Even hard coded tags are great.

I support too, it’s hard to find small games now.

I’ve always wanted this to be a thing in roblox. Since a few of my games have unique titles that no one ever searches, it is pretty hard for players to find these sort of games. Having tags could easily solve this

Massive support for this, I don’t know why Roblox hasn’t added this yet and why it isn’t a thing, but something like this should be added and an extra replacement to the genre system that was previously here on the website/engine and a better way to find high-quality games on the platform.

For me as a Roblox user and developer, I also find it hard to find cool creation across the Roblox platform or a fun game that might have the tags of “Shooter”, “Adventure” and “Puzzle” that seem fun to search and find but as well as a “Showcase” tag that would bring up uncopylocked/resourced places for developers to use and test in games, or just a simple showcase on a particular build that he/she made.

I’ve seen a similar post show an image of these game tags or user tags being used for games or players to have them on their games, a good example of what they would look like on Roblox games:

^ This wasn’t made by me, it was in another topic regarding genres coming back.

Other engines or game engines use this such as Steam which uses it in great ways for specific games, why doesn’t Roblox have this as it’s a great opportunity to do so? Would like to see this happen anytime in the future.