How would i make complex animations?

i want to make complex animation such as dual welding weapons,
a reload animation that has one hand holding the gun and the other with the mag putting inside the gun,
throwing objects such as grenades,
a two-handed weapon
an animation which switches hands during mid animation(such as right hand to left)

cause when animating complex animations the tool is stuck to where you rigged it(such as if you have it rigged to the right hand, and i dont know how to rig it to the left hand during the animation) and im not sure how to change where the tool is rigged to during animation
here’s a video to at least describe what im saying 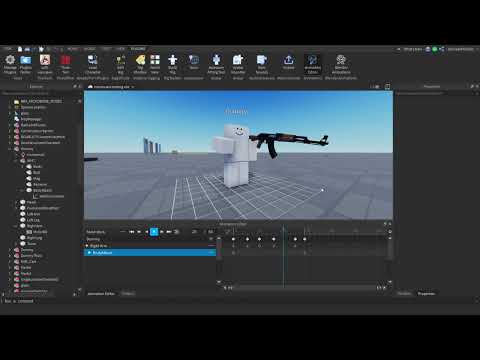 my other attempts have been futile
such as these

How would i make a coin flip animation? Art Design Support

I can make the animation but i want to change the motor6d to be rigged to another part of the body during mid animation so currently i have the coin rigged to the torso, but the problem is that i have to put way too many keyframes just so it looks right(because the coin sometimes goes inside of the hand or not attached to the hand and thats one problem, but rigging the coin to the torso, it allows me to animate the coin freely in the air and if i rig the coin to the right hand, i do…

Animating tool does not work as expected Art Design Support

and then i tried to add a looped idle animation(just the hand sticking out while holding the tool) it works the first time, but it just breaks after that, like the gun goes in place immediately

i followed this tutorial here https://devforum.roblox.com/t/how-to-animate-tool-parts-guns-knifes-etc/359484/324 but my problem is that i made an equipping animation, but when i pull my weapon out it comes from the torso and then it goes back inside the torso [help me] how to fix probelm

if anyone got suggestions, i would appreciate it

i’ve tried this, but not much luck for me

Try to rig the gun to the torso.

Is your gun rigged to your right or left hand does your gun have a handle ?

If not then do that and it should work

Edit: right and left arm if your using r6

Yep i know that but still it is better. Even the tutorial does that