Hey there everybody! This is my first post here on the Devforums, so just a quick background on me, I’ve been on ROBLOX since 2008, and coding/designing UI since 2011. I usually specialize in first person shooters and technologies within that area but today I want to give out a bunch of my open source work. I have spent a decent amount of time lately creating new tech for everybody to use in their own games and groups and hopefully what I give you today will help you immensely! Everything I post here will have been programmed and ui designed by myself. Possibly on one of my three accounts.

Once again, I really hope this tech I’ve created comes in handy for you and helps you guys advance your games and groups ahead! Enjoy and if you have any questions, let me know! Boricua#8743

If you want to test out the Weapon Engine, go here, and type out the word “Start” and choose the firing range! https://www.roblox.com/games/3506968245/Deadly-Planks

This gun kit is from FiberOptic, a revamp of warbound.

It is not a revamp of my warbound system or my old vanguard engine. I programed it from scratch to create a new hybrid. There are many differences in CE and my last projects.

Thanks bro. Been trying for a very long time.

I am speechless. This is so well organized and easy to follow… thank you for this. You’re very talented.

Thank you my friend. I try my best to make it as easy as possible for everyone.

Is there any way to have the ziptie detain animation work with R15 as well?

So good ! You are so talented !

I can add this feature in! Give me a couple days though. I’m currently busy with studying.

The discord link in your readme made roblox flag my game and give my account a temporary ban. I advise anyone using these resources to delete the readmes immediately after reading it until this gets fixed.

Great FPS resources, I would suggest this weapon engine over others.

Is the ziptie system worked with animations or not yet?

This is awesome can’t wait to test it out, good job!

Can you make the weapons so you don’t have to press F every time?

Does anyone know how to fix the hardpoint system so that the “currowner” isn’t spamming from the team to nil even though someone is standing on it?

Very cool stuff! I’m sure a lot of people will appreciate this!

I just looked trough the code of the Carbon Engine, it has one major flaw, the vulnerability is basically the ability to kill the whole server with just a few lines of code.

kudos to you for actually changing the names of the remotes to be blank, but an exploiter is still able to access the remotes by getting the script enviroment of the client engine localscript, and then they have full access to the damage remote.

the server engine script, has a large vulnerability where it handles the Damage remote, it does not sanitize and verify if the damage call is legitimate, it just checks if the L_116_arg2 argument a humanoid, and the rest it assumes is legit. 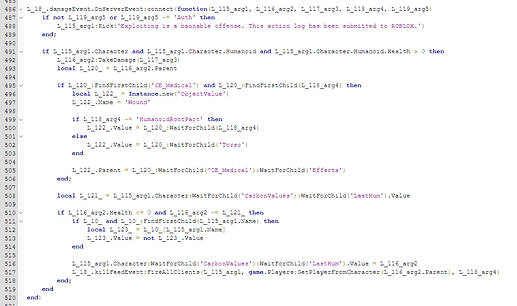 the following line of code WILL not work to abuse this, but is easily fixable to work. you simply need to find out a way to get the Damage remote from the Events folder, which as said, is possible trough simply getting the script enviroment of the Carbon_CEngine script, and just getting the table of remotes stored in that localscript.

This is being semi-patched for the time being. I am implementing a system that monitors all events from Carbon Engine and will log each and every event interaction. It might not be able to prevent the kill all exploit, but it can tell you who is doing it.

For the crate system, it’s only letting me take one weapon, is this a feature or a bug, if a feature how do you change it.
Also what does, in the auth module, UCost and CCost do?
And do vests, helmets, ect. have a use, or will that some later.
Edit: changing the class value from primary to something random fixes it, because you only get one gun per type of gun.