NOTE; The system is currently released in it’s later beta stages, so a few minor stuff can be changed from what they are as of now, but probably it’s name as well.

You can get the model here if you already know about it.

For those who don’t, feel free to keep reading.

Nano is an admin panel made for the simplicity of use, as a collab between two development groups. It offers a unique range of features not present in other panels, and tries to be as non-intrusive as possible; all while providing an easy-to-use interface for the users to explore and hopefully enjoy.

Doesn’t Redefine:A’s engine have a security risk of the Shared Environment?

Yes, and it still has it. However, as long as you DO NOT LET ANY MALICIOUS CODE ONTO THE DAMN ENVIRONMENT™, you should be safe.

Alright, alright. I want to see how it looks, can you show?

* also some tweens that i refuse to take a gif of because of laziness, not cuz they aren’t done

Cool script! Where get?

You can currently get the system using this model, while the mainmodule is also open-sourced within it. Yes, you can have it’s require() here.

If you have any feedback, whether on how bad the UI is, or how buggy the system is, or just simply want to send us ideas, you can join either the Axelius Community Server, or the SezeiME one.

Who is the team behind this?

Basically… only Cytrexon (@Cytronix) and I have developed the system from the base of Redefine:A. However, we had multiple testers, helpers and even notable people who helped with the project. A credits section is available within the UI to showcase all of our helpers, special thanks, and… well, someone I personally still hold dear after this long of them being… “gone”.

Please note that since the system is new, expect a lot of bugs. No, really, expect ants, worms, caterpillars and even ladybugs.

In all seriousness, please do report any bugs you find within the system, since we can’t test the system with ourselves. All feedback will be appreciated, no matter how insulting they are to our dignity as long as they are constructive.

¹ Compared using the UI rather than Chat, with other admin systems, including Adonis, Basic Admin Essentials, Redefine:A, SimpleAdmin (v1.7) and a few others. Comparison Version: Beta PRE2 Candidate 7.

² There are exceptions such as unfinished NanoWorks assets and secure variables that shouldn’t be touched in-game.

This seems like a really good and nice alternative to other admin systems, i’ll be sure to check it out and give some feedback.

I love the GUI!

This is already a nice system, and It’s only in alpha

A search bar in the GUI would be useful

I will be watching this system hopefully grow!

This is already in the to-do list for the beta version alongside a few more features, but both Cytronix and I appreciate all feedback! Feel free to suggest more stuff you would like to see in the system.

We are taking a bit of a cooling period until we start working on the beta in order to get feedback and collect all of our lil’ insects from the system.

Oh and just a heads up your name conflicts with an already existing admin panel: Welcome to HD Admin

This might make it hard to search for your Nano once the one by the owner of HD Admin is released.

Alright, alright. I want to see how it looks, can you show? 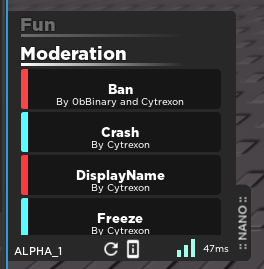 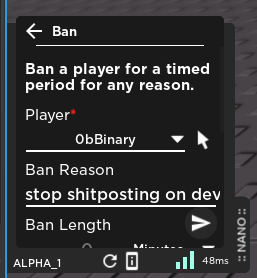 Still, the good al’guis are better than my garbage.

With some discussion with Cytrexon, we came to the conclusion that if we will have to rename the system, it would be called Atom or something similar.

Thank you for sharing that information.

It’s a good admin panel I guess, I’m not a programmer so I don’t know what these words mean nor do I know how it works.

However, the average user doesn’t really need to know who made what. Add a link in your UI to a Bulletin Board post or something.

Additionally, it’s message from, not message by. UI is literally unusable. I will be suing you for emotional damage. (I’m joking—it’s fine.

Honestly the panel GUI looks too cluttered, everything is clamped together and is overwhelming to look at, I’d rather have the panel appear bigger and in the center of my screen rather than to have to try and use the clamped mess of that it is currently (this would also benefit games that are first person only)

There’s barely any space for textboxes too, which becomes a annoying problem if you want to have a pretty descriptive reason rather than something like “bad lol”

Have you seen the pet ant jack

Thank you all for the feedback.

The textbox part will be fixed with Alpha build 3, alongside a new setting to toggle command credits.

The reason for the toggle is because the commands are credited locally, since people might create their own commands for the system. I don’t want to leave them out from the credits, therefore they are automatically added into them once they create even a single command.

Sadly I have no ETA for when the 3rd build for the alpha will be released since I do not have access to my laptop at the moment.

Once again, thanks for all the feedback and patience.

The 3rd alpha build of Nano has just released in order to mitigate some of the issues brought up by @busterbob64 and @LostFiftyFityGotQiqi;

If you already got Nano before the update, make sure to check if debug mode is disabled for you.

Additionally, the loader has been updated to fix a grammar issue brought up by @busterbob64; This is not coming with the updates, and can be manually edited using the commands section found within the loader.

How do I use it? I can’t find anything telling me how to open the UI or even where to put the script

Hopefully this reply will help anyone with the same issue as you. If you still are running into issues, such as errors, please contact me as soon as possible.

The tab in the bottom left is there now, but when I open it, nothing is there, does it not work in studio or something?

Also I don’t think I like how the the devs have immunity, makes it seem like your gonna do some sketchy stuff.

While it’s true both Cytrexon and I have immunity, it’s simply there to show an example of how the AdminList entries should look like; Our immunity is not hard-coded and can be removed easily by removing us from the settings. It’s that simple.

The only part where we are hard-coded is the credits section, which I think we can all agree would be a nasty move to remove us from it. :L

As for the UI showing nothing, can you send a screenshot of your console log? You can open it by pressing F9.

EDIT: It only works in-game, not in studio

You need to enable API access to Studio in the Game Settings. 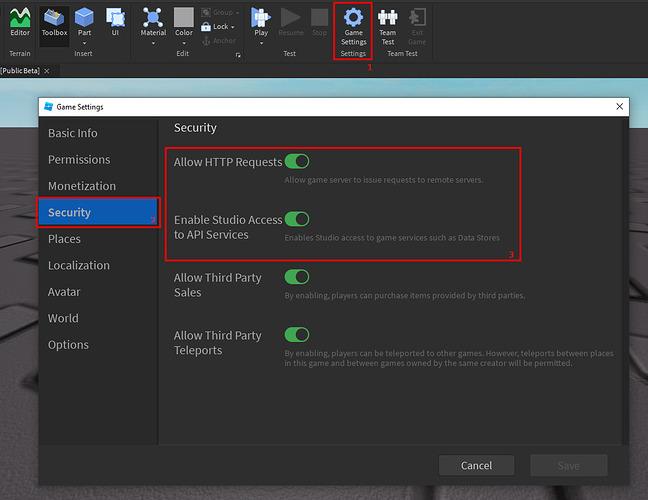 As an actual note, Pre-Beta is now in development and I can thankfully say that progress is steady. Most of the features we planned for the beta are already implemented, and is now being checked by the QA member Cytrexon has picked.

As for the lame joke, here’s a compensation so you can wash the cringe off your eyes because of the terrible mspaint image.