Please do not bump this topic anymore. Instead, go here.

For those of you who don’t know what SourceMod is, it’s basically an “admin” engine for VALVe games such as TF2, CS:GO, Dota 2, Day of Defeat, etc…, which allows plugins and mods to be installed to the servers to allow custom game modes such as Jailbreak. This admin system aims to get the same result, but differently.

Key differences between this admin and other ones

This admin includes many features other admins wouldn’t have even imagined of adding, such as;

Local player IDs is a part of the Cache collection, where every player is assigned a “Local ID” upon joining. It allows a more ‘selective’ command argument while keeping itself a non-necessity for the commands. What does it give? Let’s say it’ll end up with a “!kick #3”

Okay… but what are libraries?

So how customizable are the UIs really?

They are as customizable as you want, as long as the main parts of it are still on the UI. It can range from basic color changes (aka Themes, officially), to a whole new UI system just to aid the users. Really, it’s that much customizable.

Wait, isn’t that the old Zeus Admin by @TheKitDev?

False. Zeus Admin was a chat-based administration system scripted by him and only him. Originally, Redefine:A was supposed to be a project with both of us to make an ‘Enterprise’ version for that admin, but Kit has turned out to be inactive with that project. I took it over and made it much more smooth and silky, to the point of me rewriting it from scratch. No, it doesn’t mean that the original Zeus Admin itself is dead… I think.

You no longer have to ‘sign up’ in order to get the model anymore. It’s now open source, and ready to go for it’s next target.

You can get the model here. The latest version is V.02#5.

This thread will be used for whenever I update the admin.
If you find any bug with it, feel free to report it here!

This admin is updating regularly without having an auto-update require()! That’s why I am adding this guide;

Move all of your old add-ons to the new Model’s add-ons folder. Update them if necessary from their official pages / models. Done! That’s literally all there is to it! The admin list saves from version to version.

When you’re using this admin, you may have noticed that me, all and others won’t work. The reason is that you need to add a “@” before the alts. For example; !kill @[all/others/me/admins/alive/dead…]. I have done it to be like that so people with confusing names (such as those who start with all, me, others, etc) won’t make a big bad.

In my opinion. not hating or anything the benefits or extra features of this engine seems to just be in favor of convenience, I don’t see how it really add much more flavor to the product itself.

That’s correct. It was made to be a convenient tool for administration.

All of the UI shown here was taken in the “Source” theme made by @Yes_Cone, which is provided with the admin in the “Add-Ons” section. The “About” section will always be in the “Light” theme, as this is the signature theme for the admin. 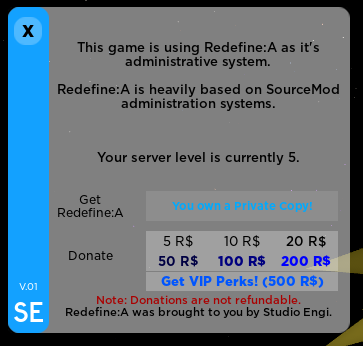 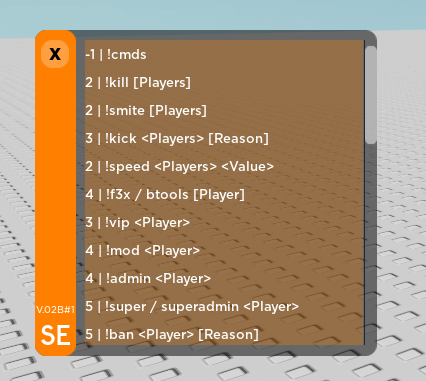 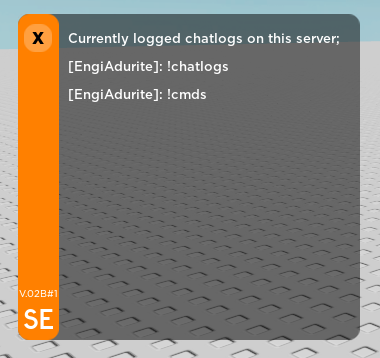 Sorry for the month-late bump, but I have updated the admin to make it about 20% better before the big release of version 03.
The new version is V.02#5

Changelogs;
This build (#5) adds;
Added sounds to notifications.
Added some new colours to the “RC3S” module.
Preparations for version 03, such as better modding support.

Fixes from previous builds;
Fixed empty arguments. (aka; !f3x will now act the same as !f3x @me, as originally intended.)

@0bBinary Hey, Before I get this. I just want to ask a phew questions.

Hey there, thanks for asking the questions.
First, I want to mention that this is an older thread and you should’ve asked the questions here, as mentioned at the top of the topic.

Secondly, here’s the answers for the questions.

Haha. Thanks I dont really read. I Normally Just Skim through alot. Ill look at the new post.