Please, oh please, can I just keep these old icons?

I’m not sure what I did but when I launched Studio from create.roblox.com and clicked “edit in Studio” on a sub place within a universe (https://create.roblox.com/creations/experiences/UNIVERSEID/places) instead of just clicking the edit button on the games page on roblox.com, it launched an older version of Roblox Studio with the old icons: 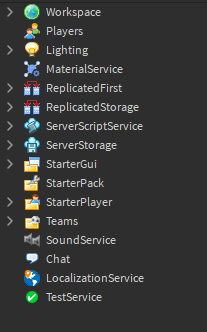 These icons make so much better use of color and are much more visually clear to me. I’ve been really trying to like the new icons but I just can’t. They’re almost all the same color and this makes them harder to read at a glance. The Play Solo button looks the same as the run button, every script icon looks the same until you take a second glance, and other UI changes like the removal of these buttons;

It all makes me loathe the newest version of Studio.

DO NOT PATCH THIS! THIS IS NOT A BUG REPORT

also,
For the love of God and all things holy let me keep this

An option to be able to select which theme and button layout would be nice at the very least if this feature can’t be implemented instead;

As a Roblox developer, it is currently too hard to fully select what my theme and studio icons are going to be across the entire of the studio interface. Not every person likes the current set of icons for studio as we can see here and there is debate on even using icons like Vanilla by @Elttob as not all users like it. So let’s give both the choice. If Roblox is able to address this issue, it would improve my development experience because it allowed developers to customise their interface inc…

Or at least use a theme more similar to the one in their example: This continues to make good use of colors to improve visual clarity and readability at a glance while still making Studio look more modern. It improves the look without sacrificing functionality and usability.

Thank you for taking the time to read and consider my desperate plea.

Roblox is actually releasing theme support, you can change the icons and itll pull from there if told to in the settings, which allows to change some, or all of the icons, i do hope they allow you to change the actual backgrounds though, being able to change colors of the widgets would be really nice.