The icons are really good and revolutionary but are too bland and pastel, everything’s blue too.

What happened to the model icon being multiple colors? That’d be nice to have again. The thing I like the most though is the top area:

This is a definitely a win, I just wish you were able to customize the font to match it.

Excelent solution my friend. It Restores the roblox studio to previous versión before update. Thks!

Wow… I’m very near sighted and even with my glasses on I can’t differentiate between half of these new icons. They all look like lines and squares to me…

I have absolutely no clue why you went this route when the Vanilla icons were already something that were very appreciated by the community, and the creator of said icon pack realized the importance of making the icons easily accessible to people with different sight disabilities… Between being solid instead of line based, they also differentiate a whole lot more between icons to make it easily distinguishable for colorblind folk.

For the love of whoever you believe in, only now do I see what each new GUI object icon is supposed to look like… Keep in mind I’m an UI Designer, you literally made my job impossible.

The new icons are looking fresh! This change was really needed, since the old icons started looking outdated. I like it how most of the instance types have got their own icon, making it easier to distinguish different objects in the explorer menu. The colours could be slightly adjusted though. Otherwise, it’s a great redesign!

I have one question, though. Are these icons inspired by Vanilla? The new studio icons look similar to the Vanilla icons made by Elttob.

Roblox, thank you so much for listening to the community and making this change!

I’ll be honest- I like the new icons, they’re very satisfying to look at. They definitively help making studio feel more like a proper game engine. However, they really don’t work well in combination with the way studio is laid out. Having each related icon have a similar color palette is really good in 99% of cases, but if you take the explorer for instance, the icons are so small that they just all blur together.

You’d want to make sure your icons have different silhouettes since that’s the first thing you’d process, but a lot of icons share the same base, like folders, scripts, etc. Well, maybe we could just read the icon based off the little differences in the “sub-icons”? Sadly, these sub-icons all have extremely similar shape language, so they still take a bit of time to read. Maybe you could read it off the color? Sadly, a lot of icons share the exact same color schemes.

I’d suggest making the “sub-icons” be the actual icons, then treat the current icons more like backgrounds for those sub-icons.

Taking these lil’ dudes for instance, I’d center them with the icon and scale them up as to make the folder just be a background to the guys.
I’d also look into making each subicon have a separate color, but I can understand that may not work for color blind people.

I’m having terrible lag in the scripting window ever since this studio happened- it takes 5 seconds for whatever I type to catch up and everything within the script window is terribly laggy.

Edit: additionally, I’ve found that copying from the script window (ctrl + c, or from the right click menu) intermittently does not work. Experienced issue first last night and again this morning after restart. Pasting ‘works’ but will just paste whatever happened to be in the clipboard the last time it successfully copied.

Also tried to copy from script window and paste into notepad- same behavior- the copy did not work or update the clipboard content.

Slows down the workflow, re-learning studio, and a pain to develop with tabs and icons:

I speak behalf of an entire development team, we can no longer use roblox studio due to the complexity of the icons, and the bugs/issues which come with it. Allow us to make a completely detailed list on all the bugs we’ve encountered. (10+)

1: An unknown frame appears during game testing which disrupts the view for three seconds

2: All “Tabs” reload during play testing, with the older version the Toolbox tab and all other tabs would stay put, now they disappear and reappear for a second, which disrupts the user’s creating 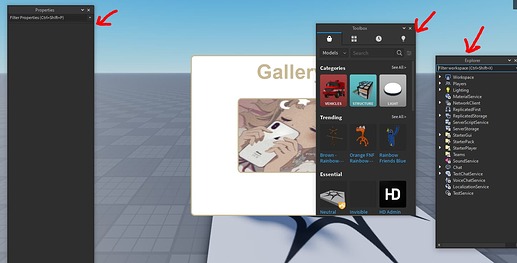 3: Every Tab is bugged with White Corners

4: The tab sorter pops up each time you move a tab, it covers the middle screen, making it difficult to see, I suggest making it invisible and maybe when hovering your tab where the tab sorter use to be, it would have the boxes slightly highlighted 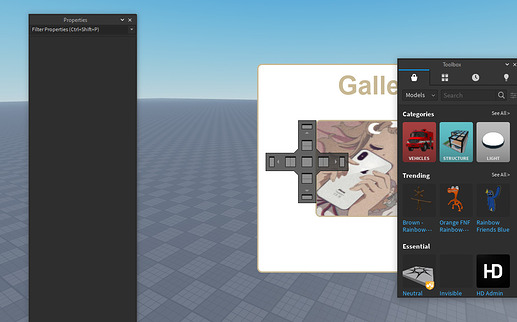 5: I struggle with everything in a similar color tone, as well as the icons having small details, but what is hard is that everything under a ClassType or Genre are the Same Color, and 40%+ of the icons have no strong resemblance to the ClassType itself. Variations of color is important in the construction of visual icons, so the mind may sort out things easier due to each thing having a unique color, not a consistent color theme.

6: You can set Your Game View as a separate tab, which may be beneficial to some, is difficult to put back in place, and a simple misguided mouse click may remove it from its position (happens often). 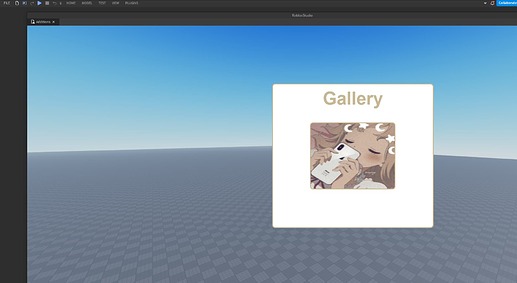 7: Highly Similar Icons with the exception of fitting Extremely Hard To See additions on the inside of the Icons make you mainly rely on reading their ClassTypes rather than knowing that they are when viewing them in action in the Explorer, this is a challenge for visual-challenged people 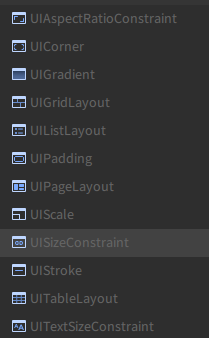 8: Reusing Icons, the Values here use to have differences in their icons, now we simply can no longer tell 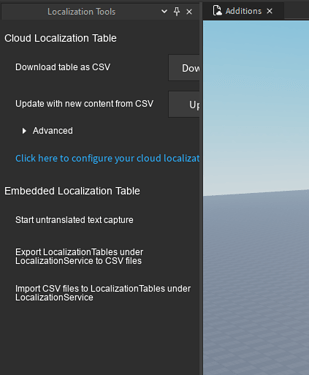 10: Team Collaborations are difficult with consistent bugs, the tabs are clashing with each other and sometimes crash individually

11: The Render Screen shrinks when there is a Script Window next to it

12: Random Crashes with UI, the UI can randomly crash at random times, making the team restart their studios 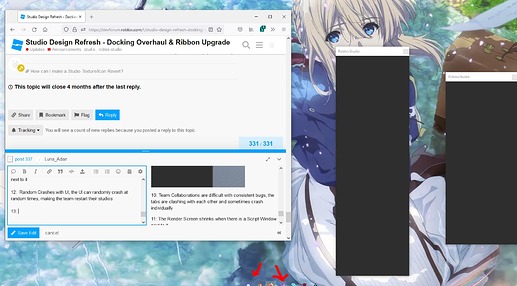 After closing studio for a while, I realized roblox studio is shut down and no instance of it is running, and yet I am seeing this only on my wallpaper and it’s movable, this is a critical bug

Our team is leaving the Roblox platform for now, it’s not suited for us until we see clean results, it’s embarrassing for us due to how we must Re-learn Roblox Studio.

Quick workaround to this:

Your problem should be fixed. When studio updates you will need to do this again.
I really wish they kept it at 100% scaling by default though.

Edit: This has been the case for years and I’ve known this trick for a couple of years now. This didn’t just start with this update.

Not only that it has similar icons, the transparent backgrounds of these icons also makes it harder to see, the random crashes that happens when trying to open some plugins, and how buggy it is when I go into test mode with random frames appearing around the screen. I don’t know how they overlooked this when they redesigned the UI, it should’ve been obvious in one test run that it was really bad. They keep changing things that already works and would be a waste of their resources trying to fix a problem that doesn’t exist. We already have programs out there that can change the icons for us without needing any intervention by Roblox.

I could not agree more. I see no logical reason to simplify the UI, it was easy to differentiate before and was colorful. It was not broken, so in my opinion it really should not have been visually updated. I was going to update my experience today but I just can’t do it, I have to re-learn everything (including very similar/the same icons - and I’m a visual learner) and I didn’t need that obstacle now that I’ve been fully using Studio since 2019. Devs, please make it so people like me can actually use Studio as we’ve been accustomed to. Please add a toggle to choose between legacy and new UI features (literally no harm in doing it).

I’ve not gotten the update yet.

I don’t know what this update was even for, but I don’t like it

Not really, I prefer the new one as it feels more modern But, Who knows I might not like it when it comes out.

The new icons are simply bad and don’t make sense.

First of all, they use the absolutely disgusting wireframe style.
I understand it’s popular, but that doesn’t make it good. Not only it makes readability worse, but they look much worse on mid- and low-DPI screens compared to solid icons, due to aliasing on the icons being visible on the inside and the outside of them.

Secondly, the colors of icons are mostly the same and it is much harder to tell apart classes.

Just one image raises so many questions: 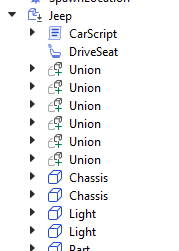 I honestly wonder if it is more popular, based on the comments since the update occurred it seems like there are more likes/replies (and comments in general) relating to the ones that have a harder time with the new update.

I meant that this style is gaining traction outside of Roblox, for example Windows 11 (context menu and ribbon bars) and YouTube.

They have the exact same issues as I mentioned earlier, with Paint in Windows 11 being the absolute worst.

I rely on the colours to know which instance is which but right now i am taking literally 15 full seconds to search for the materialservice because everything looks the same in my eyes.

This makes roblox studio blurry sadly so i cant use this to change my icons, changing the icons manually also doesn’t work anymore because of this update sadly.

Do you know of any other options by any chance?

Suggestion abt the new icons: Add a toggle between these ones and the new ones, because I am not a fan. Neigh do I want to forcefully mod my studio to change either. These are a total ick and are hard to look at, and everything just feels unorganized with the same bland blue.