Thoughts On My 10 Robux Sponsor?

Disclaimer: Yes I know 10 robux isn’t enough, no this isn’t an actual sponsor, its only a test to see how much 10 robux would get me in terms of impressions, clicks, and visits.

I spent 10 robux because I had only 24 robux in my account on that day, I wanted to test out sponsoring one of my games for the first time, and I wanted to see what I’d get for paying 10 robux. Surprisingly I got 6 clicks and 3 plays which is lucky according to other developers who have spent this same amount to see what they’d get. Thoughts? 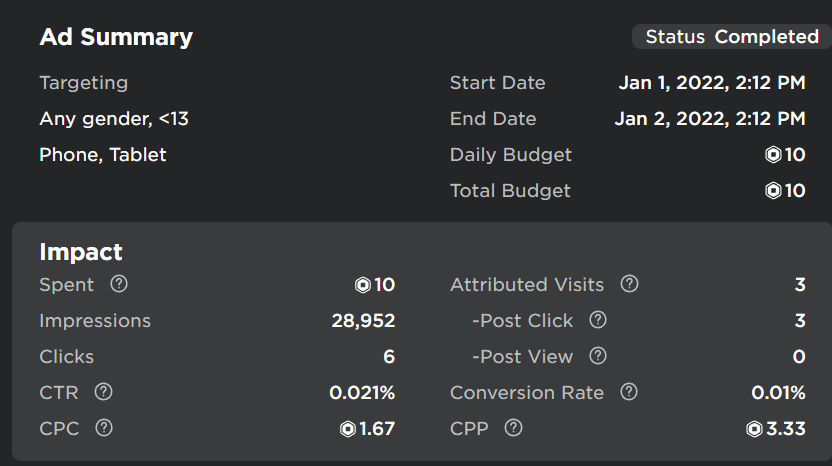 I think you were extremely lucky to get nearly 29k people to see it from 10 Robux. This does show how much Roblox wants people to advertise!

Yeah it was pretty crazy I was expecting 1k impressions, my other sponsor that I spent 14 robux on got 40k impressions, Roblox really does want devs to advertise their games.

How much did you spend? Also what was your game logo and name?

I remember putting up a sponsor for 10 minutes

That’s impressive! I had to spend 32 robux over 2 days to get that many clicks! 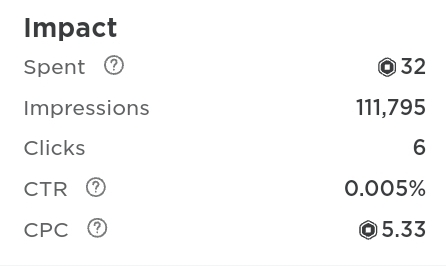 I sponsored the game on a Saturday and maybe there weren’t many developers advertising their games, the difference between our stats could be because of day, amount of sponsors, or just difference in targeting. My target was <13 phone and tablet users

It’s always hard to say what a “good” rate is. But, I use this scale for Sponsorship CTR: What sponsorship CTR would you aim for? - #7 by zaydoudou

Also, more important than your rate is what your expected profit is so that you can “keep going”. If you loose Robux from advertising, then that advertising campaign is moving you in the wrong direction. And if you gain Robux from it, you’re moving in the right direction. Here is a good post on that: The Economic Guide to Profitable Game Advertising

Thanks! I’ll bookmark both of these whenever I need them for reference.

That is very outdated now since it was a year ago and sponsors have became a lot worse since.

Theres 1 thing you have to note, impressions in roblox are not what you think.

Ever since roblox has added the sponsor tab, CTR rates have gone down a lot since. Because when your game appears it in the sponsor tab to someone, it would just be a random player looking at popular games to play and not sponsored games but would still counts as an impression because it showed up in the sponsored tab anyways (regardless if the player scrolls down or not). This problem is the same as facebook video’s views problem.

And there will be an low chance of someone clicking your game due to how unnoticed the sponsor tab is. (it actually took me months to realize that roblox lowered it down in the front page instead of removing it)

This statistic is misleading.

In that case, what metrics would you use now to determine success? Just profitably? And, do you still think it’s worth using sponsorships?

And, do you still think it’s worth using sponsorships?

It’s not really worth investing a lot of robux on sponsoring once you got a community. Although you can still spend 3,000 robux to sponsor the game for 30 days to see how it goes.
Eitherway i don’t think its really worth it, if it is then let me know because my friend once sponsored his game for 1,500 robux (for a day) and only got 600 clicks and made no profiy whatsoever.

In that case, what metrics would you use now to determine success? Just profitably?

Awesome, thanks! And in your opinion, do you think having a community around the game is the best way to “advertise” your game? Or do you think ad’s (not sponsors) still have a place in advertising?

ad’s (not sponsors) still have a place in advertising?

Ads are still more powerful than sponsors as shown here. (Although im not sure whether modern ads still get the same CTR as the ones in that topic)

do you think having a community around the game is the best way to “advertise” your game?

If you still have an active community then yes, reason why is that if they play long enough then they’ll friend will also join and if they also play long enough and you get lucky then you can create some form of scheme.

Otherwise if your community is dead then i’d suggest advertising the game and play with your players in order to have a higher chance of executing the scheme that i’ve mentioned. (Assuming you’re a small developer like me that gets less than 10 playing on average)

Although im not an investor or some kind of advertiser so don’t mark everything i say.

I think the advertisement was normal, considering there being 100 million+ users on the platform, 20k impressions is barely anything.

100 million+ users on the platform

There’s only 10-5 million daily players. Roblox says its 40 million but thats very inaccurate because its based on roblox accounts which players and BOTS can easily make and NOT unique players.