Hello fellow developers, in this tutorial I will be unraveling what I’ve come to see, through experience and economic insight, as the most concrete guide to profitable game advertising on Roblox. A bit about my background, I have a BA in Economics from the University of Arizona, and have maintained a Roblox game that has earned at least the floor DevEx cashout since October 2013 when DevEx began.

First question, I’m a developer too, why would I want to show all this work to make others more profitable?

Part 1:
First, we must create a foundation understanding of impressions and our options to advertise as Roblox developers.

You must get some sort of data first, get data on one of your user ads and a sponsored game ad. If you do not have data yet, bookmark this thread and it will be here for you. To get the most out of this tutorial I assume you now have at least 2 different type of ads’ CTRs to compare.

The best way to learn this is through example, replace these numbers with your numbers. From now on I will talk as if we are doing this together.
The 4 data points below are all exogenous. The first 2 are dependent on our situation, and the last 2 are from the larger market for ads at the time of our ad run.
Let’s say our data is:
User ad CTR: 2%
Sponsored game CTR: .8%
Example estimated impressions per Robux for user ad: 90
Example estimated impressions per Robux for sponsored game: 135

What are we trying to find? Roblox currently does not give data on play through rate (different in the CTR in that players actually press play on your game after clicking the ad) of an advertisement clicker. We want to maximize our Robux per Click. That is the current easiest way to determine which ad is bringing the most players to our game’s detail page per Robux spent.
We shall assume that our ad will receive the exact same CTR as last time. Note it is likely that the more Robux we spend on an ad, the less the CTR will be due to ad exhaustion. In economics this is diminishing marginal returns.
Example, if we spend 1k Robux on our ad with the given ad market from above:
Estimated clicks for user ad of 2% CTR:
1,000 * .02 * 90 = 1800 Clicks
Estimated clicks for sponsored ad of .8% CTR:
1,000 * .008 * 135 = 1080 Clicks
We should run the user ad in this scenario, because we could get about 66% more clicks for the same Robux. However, if we think that sponsored game play-through-rates are 66% higher than user ads, then you could argue to me that running sponsored ads are more efficient for players actually playing our game. Replace 66% with the percentage difference in your real case. Note it is extremely hard to get data on the play through rates of user ads or sponsored ads. In this tutorial we will assume clicks per Robux is king.

Great, now we know how to compare our own ads to see which one could get the most clicks per Robux we spend on it. We know we’re operating a bit more efficiently than just eyeballing it. What else can we do?

Part 2:
We should estimate how our ad might do.

We can estimate how many visits our game is likely to get after running an ad. And we can use that as an estimate to how much our ad run may influence profit.

Here is a spreadsheet version of the above logic. This spreadsheet has a friendly color design to help you navigate all the numbers. Inside the spreadsheet are numbers given as an example where the ad was not economically profitable.

Part 3:
We should make sure our ad was profitable after it has finished running.

If your game has a player-base, profit on an ad is not as simple as revenue - ad cost. You also should account for the trended revenue your game is likely to get on the day that you wish to run your ad. For this part, take a look into the spreadsheet as well. The areas off to the right and below the grayed lines are meant as a post-facto for your ad. You input the actual stats that your ad received.

With all the updated stats, you are given a few sentences about what to make of your specific scenario. In this case, these are the inferences gained from having run this ad.

All of the logic is implanted into the spreadsheet, so you can check out where all the numbers are coming from to make your own connections with what is going on. If you believe to have found any logical errors please let me know and I will take a look into it and fix it if truly a mistake, or I will update this thread or the spreadsheet with more explanation if something is confusing.

In conclusion, check to make sure you’re not getting burned out there in the ad market, there’s no reason to with just a few stat inputs. Good luck out there!

Thread and spreadsheet subject to updates if better methods are found via more insight or new Roblox stats.

502 Likes
Startup Advertising
Most efficient way to sponsor?
Game Development Resources [MEGA THREAD]
Using the Roblox Advertising System
Featured Games Program - Getting Started & Expectations
The story of my "successful?" first game
Advertisement Help
Making a simulator, is this good enough for a release?
Advertising a Game, what are the best ways?
How much, if at all, should I spend on Advertisements?
What game ideas do you have? How do you come up with them?
Set duration of ad campaign
Estimated ad impressions should be based on data for the specific day
The Economic Guide to Gamepass Price Optimization (Maximize Profit)
Thoughts On My 10 Robux Sponsor?
Sponsored Ads lack estimated impressions data
How much robux would one have to put into a game to make it have a good amount of concurrent players?
Why is my CTR so bad?
We’ve Rebuilt Sponsored Games!
Feedback on my first game HOLDFAST!
How to split 20k up for advertising/sponsoring on PvP game?
What's the best time to sponsor?
Any tips to improve my marketing strategy?
What's a good CTR for sponsors?(Help needed)
Are ads or sponsors better? And what gets me more revenue and players?
Mobile Compatible roguelike game. Should I spend mobile, or pc sponsors?
I just did a test sponsor… I got 0.021% CTR
Thoughts on our new game icon, PC CTR 0.5, tablet 0.22
How many average players would I get from 2k robuxs worth of ads?
Will this ad be effective enough?
TheAmazeman's Catalog of Feature Requests and Helpful dev forum posts
metatablecatmaid (metatablecat) April 30, 2018, 1:57pm #2

This is extremely helpful, thank you for sharing!

I lost this long before I became a member of the devforum and thankfully stumbled across it again today! This is a great article. Thank you for making it!

Based on the uncertainty above, I recommended not dealing with guessing impressions per Robux on weekend changes.

Thread and spreadsheet subject to updates if better methods are found via more insight or new Roblox stats.

I recently found a 3rd party site that posts live data every 10 minutes on Roblox ad and sponsored games. This site will be able to give you a ton more insight into what type of ads or sponsored games are currently and historically better for impression per Robux. I highly recommend coupling this tutorial with this website.

View past and current Roblox sponsorship and advertisement rates so you can maximize the effectiveness of your promotion! 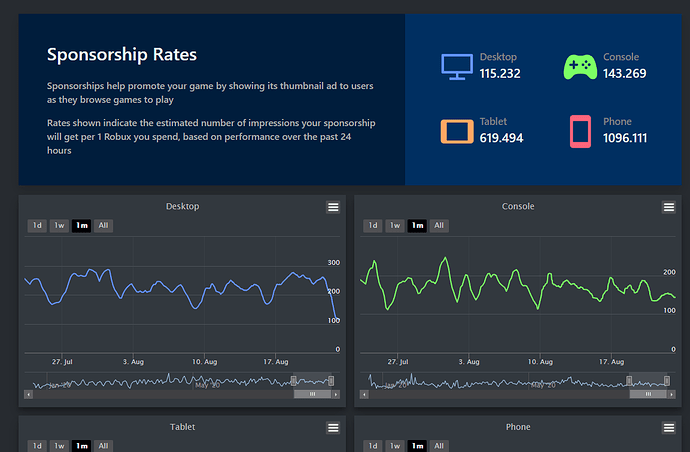 Question: Wouldn’t it be a more accurate reflection to calculate based on the number of people playing your game than the amount of Robux gained?

For example, say for simplicity my game averages 100 players every day without ads. On average with my 100 players I gain 1000 Robux per day. This would mean I average 10 Robux per day per steady player in my game.

Now you must take into account they did not all spend their Robux on the day they found the game. Many repeat players I’ve found are more likely to spend Robux on a game they play often or some have to wait until their Robux come in from their subscriptions to afford it.

So if I run an ad campaign and my game goes from 100 steady players to 120 steady players and that increase lasts say 10 days then the amount of revenue from that ad would likely be 10 Robux per day times 20 average players times 10 days, making the total likely profit as a result of that ad 2000 Robux so hopefully you didn’t spend more than that on the ad.

Yes I know these numbers are trash, it’s just an example to simplify the math, hopefully, you get the idea of what I am saying though.

Finally a good tutorial abouut ads, last one I saw said “Put as many memes as possible”

Thanks for bumping the thread, I never came across this one.