Hello there! I hope you are feeling well today. I wanted to say that as a Roblox developer, it is currently too hard to create a custom water block and for sure many of you could agree with me in terms of the following problems:

These are some posts that were made a long time ago about adding a water block/material: (They are different however because they literally don’t say half or more of what I have said here)

If Roblox is able to address this issue it will help me a lot because:

An Instance of type WaterBlock: (Should be considered a BasePart too) 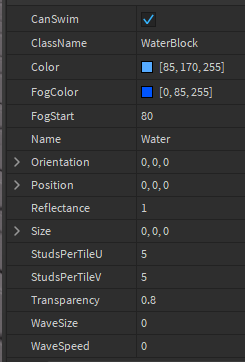 That’s all I had to say, thank you.

I made a request for a similar issue…

As a Roblox developer, it is currently too hard to create a custom swimming or water environment while still getting the nice visuals of terrain water. In my game I have a lot of morphs for players to morph into, and due to their various sizes and shapes, I sometimes have to attach invisible parts to them that I do not want to affect physics, so a lot of them are massless. This causes problems when interacting with terrain water. Even if the player’s Humanoid is set to not detect swimming, it…