What are you working on currently?

As the tradition goes in this forum, we have a single thread where we show off and discuss what we are working on this year. For last years thread see: https://devforum.roblox.com/t/what-are-you-working-on-currently-2019/218270

So what are you guys working on?

Well, I’m working on a new SCPF game, that contains new and unique ideas that anyone has never seen on the SCP genre of Roblox.

The game development started some months ago and probably it would be released in some months, at May or June.

My main goal in 2020 will be, to make a successful game, that makes enough money to fund new projects of mine. I also want to join a permanent dev-team because I don’t want to make most of my games alone

Currently I am working on some commissions and asset-packs, that I’m planning to sell. Here’s one of them:

I also have some unfinished games lying around on my computer, maybe I’ll try to release one of them in 2020.

I’m also finishing school and starting to become a full-stack software engineer at a web-design agency in Germany.

I’m sure this will be a rough year.

I’m working on replicating obstacles you’d see in an obby, and putting them into one single game.

Currently working on a side scroller shooter. It’s coming along pretty well I presume. 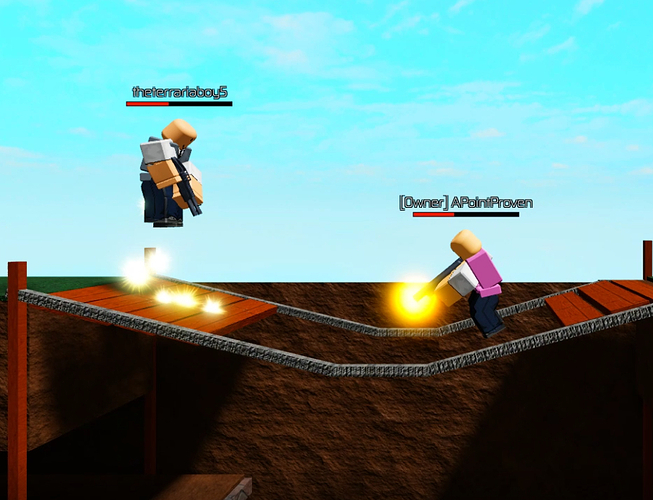 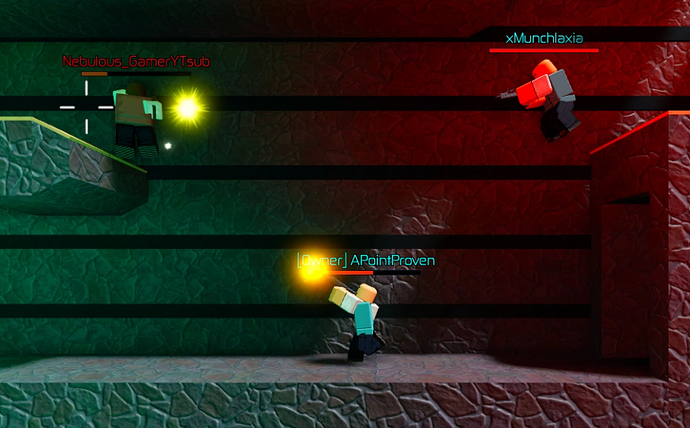 Before posting what I’m working on in 2020 (Technically its still 2019, but this project is going into 2020.) I just wanted to say that I’m surprised no one snipe-posted this thread first… Well here we go.

On and off between working on commission and/or personal projects for the last 8 months of this year, I’ve been working on an unofficially named title called “Project Blu”, which is a post-technologically and capitalist fueled industrialized-apocalypse (or in lame-man terms, post-cyberpunk) top-down shooter dungeon crawler hybrid. I’ve put a lot of effort into the design prior to starting, its almost completely laid out aside from how some of the technical side of things are to work. But all of the games core mechanics and interactions are designed and laid out from start to finish, game already has a demonetization plan that does not hinder the player behind any pay walls or “premium” only items. There are equivalent to premium only that money cannot buy called “Exotics”… you just get them by playing. Now I’m pretty confident to say that its art style and direction will be very unique for Roblox, and probably not going to be very popular with the younger audiences who like bright colorful worlds. Project Blu’s world is dark, dull, gritty and lifeless, the only color in the game are from important things like hit effects, tracers, explosions, lights to guide the player and a few set items to give your eyes a place to rest… Its relying heavily on the release of Phase 3 “The Future Is Bright” lighting engine, as the game’s design, production and release is being treated like an actual indie studio game, all assets are made outside of Roblox in Blender, Substance Painter, Photoshop and whatever else we need to use, before being imported to Roblox. This includes all meshes, textures, sounds (when we get to that point) and animations. Apart of this project has been helping my apprentice, @JohnDrinkin, grow – and in one case, force to learn (which ended up being a hidden talent of his that not even he knew about) – in his skill and ability. John’s helping out with the project with weapon, armor and character designs.

Speaking of John, check out this NCR Ranger hat, this Helmet and this other Helmet of his. It took some effort to get him to do texture work, but he did it. And boy, is he good.
(Shameless advertisement of my apprentice)

I don’t got much to show for the project yet in terms of gifs, as I’m focusing only on the back-end of the project coding wise (which for non programmers means there isn’t many pretty things to show yet) but here’s some gifs from earlier in the year:

Accurate (or as accurate as I can get) particle clipping for gas based weaponry:

Flashbang (effect duration since time of recording has been halved)

Now for graphics, to get the project flowing and to keep me busy when I’m stuck on coding, I’ve drawn up the layout PB’s first official alpha testing map, this is basically PB’s version of the map used in Halo: Combat Evolved, The Silent Cartographer;

The map above is named “Hydra’s Lair”, which is pretty lineal, and is actually more of a boss room for the final product, but this room is specifically being used as the testing map because it has a full gameplay loop in just of itself, and the player will be given the ability to interact with all of the games core gameplay mechanics and some more. Graphically speaking, the map is still being worked on because I’m not 100% satisfied with its overall look (and also there’s no cover placement yet, very important thing for a shooter!) but layout is done and set in stone, the general theme for this area is going to match this style:

…now as I said, this game will rely on the release of the Future Is Bright Phase 3 release, because this game requires that non-celestial lighting (point, spot and surface light source objects) actually respects the models spec and normal maps. Other wise the entire game is going to look extremely flat and overly lifeless… Lighting pays a pretty big role in this games looks and gameplay. With all of this being said, this is not a normal Roblox game, It was never designed to be a Roblox game, but an actual game, that I personally want to bring to Roblox, with that in mind… I’m not really going to worry much if its a profitable game or not due to the majority of Roblox’s population being kids.

I’m currently working on publishing 10 realistic projects over 2020 and establishing a game development studio to make realistic and fantasy games.

Ill keep it basic. I’m currently working on trying to release a successful game and improve my scripting skills!

Just saying, but posting in 2020 while it’s still 2019 is illegal time continuum and stuff
There are still whole two days before 2020 begins. IMO we don’t need to make these threads pre January, 'cause why would we? It’s still December. No need to rush with these things.

Check this out. I’m building a new house for myself since my previous house build was terrible.

Here’s some pictures on what I’ve worked on so far.

One of the first games I played on Roblox was Survival 303 by Davidii and the game’s dev team, and it holds a special place in my heart. I want to make a more modern survival game (inspired by S303). It’s going to have graphics similar to the game Unturned on Steam.

So far, I’ve just been working on a custom user interface API, and a server control panel. Haven’t started on any core mechanics, but I’m really excited to.

In 2020 (for this project) I plan on familiarizing myself more with OOP, and I plan to use it a lot in my game.

I am currently expanding my horizons for 3D modeling.

I’m currently working on this thing which is for Deathrun by using a bunch of tutorials on making advanced built terrain.

Damn. This really is quite impressive, especially for Roblox.

Cannot wait for this release. Please create a thread for patch notes so we can keep up with this project, or link me to a playable version, even if it’s just for testing.

As a side project, I’m currently working on a module that has to do with matrices, currently I got most of the fundamentals set. Matrix creation and matrix addition and subtraction is done.

But still, my to-do list is full of stuff!

I’m working on a “horror” game which is going to contain different types of “horror” material. Looking forward on how it’s going to turn out

I, and by that I mean my team of four veteran developers, were and are working on a highly-detailed yet flat-shaded train simulation game known as ‘Rails Unlimited Remastering Project’. It is a breakthrough sequel to the original Rails Unlimited map which was incredibly bland and grid-like. 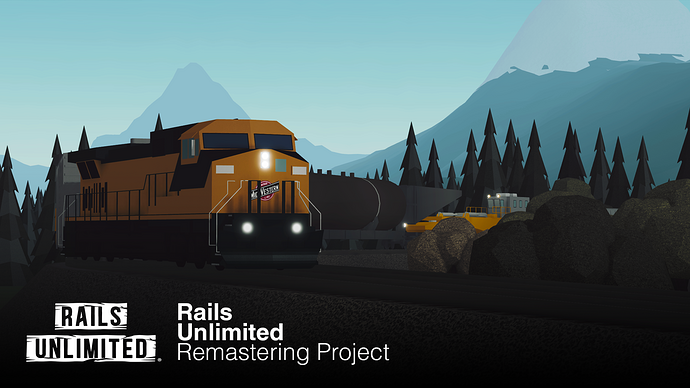 41920×1080 1.4 MB
This is one of the thumbnails ivan0 created for us. It is very professionally made, yet simplistic font and design.

Rails Unlimited in general is intended to resemble a simple, hardware-friendly game made in 2012. Despite the criticism of not being ‘ultra-realistic’ enough, we understand that Roblox’s rendering and physics engine has its limits, as do our players’ devices.

What makes a game good is not primarily eye-candy, but also fluency, gameplay, and variety.