Xbox players can no longer chat, resulting in major loss of playercount

I’m receiving reports that players on Xbox are no longer able to send text chat messages in games, presumably because CanUserChatAsync is now always returning false for these users. They’re also not able to use other features which accept custom text input.

A player sent in this screenshot - they’ve always been able to chat on Xbox in the past, but suddenly they’re unable to do so:

The reports started coming in yesterday, and since our game is a social game which relies on the ability to chat, we’ve experienced a major loss in players that coincides with the issue. Hopefully this can be resolved quickly.

Recently, we have been working closely with Xbox to ensure that the Roblox platform is meeting Xbox Requirements. This change was made yesterday, and we are still preparing communication to announce to the wider community. We will also be making changes to the Developer Hub Xbox page to reflect this information.

As your players discovered this means that text chat is no longer available. You did mention in this post that there are other features that accept custom input that are affected by this change, would you mind giving me additional information?

EDIT: We just made an announcement regarding this. Updates to the Featured Game Guidelines Page

Any feature that requires chat privacy permissions is no longer available on Xbox (in Roblox High School 2’s case, this also includes the ability to set an RP name, as well as the ability to make server announcements).

It’s really unfortunate that this change was made with no warning whatsoever and with no opportunity to find an alternative solution. This has had a serious negative impact on our game - our average playtime on Xbox has dropped nearly 50% as a result of this change. Text chat is very popular among Xbox players because it’s the only way they can communicate with PC and mobile users - without it, they’re just stuck in the dark, unable to talk to anyone in games.

I can confirm this, Went to my brothers console to attempt to test the bug, the chat + over items that cindering mentioned are indeed happening, I hope this can be changed or somehow a bypass this.

I’m a slight bit confused, I rarely play on Xbox ever, but I never even had a chat feature. I never saw anyone’s chats and I never could say anything. I have been playing roblox for 4 years and have been developing for 2. I can say then whenever I played on xbox during those 4 years, I could not see chat nor speak in chat. I may be missing something, but that’s my perspective of this “bug”.

Chatting on Xbox was only introduced recently (couple of months ago iirc), and by the looks of it they took it away pretty quickly.

Many games have chat features, some with a lot less filtering than Roblox.

My best guess is that the xbox restrictions is roblox trying to keep their game rating E for everyone 10+(something like that) On Xbox there are more game restrictions.

However, the ability to not be able to have a chat for Xbox players will hurt the player base there for sure

Edit: yeah it is E for everyone (Mobile) 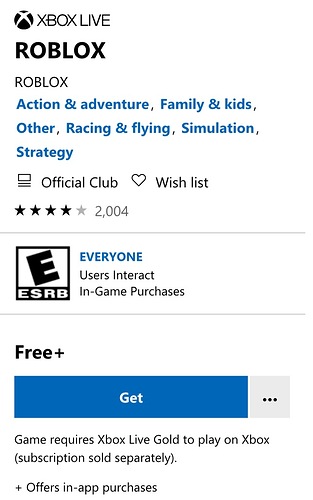 Wasn’t it E10, that means the restrictions have tightened.

No reason to work on something if it’s meant for a very narrow niche.

Seems like I’ll just ignore XBox development from now on considering the hussle of implementing specific bindings for controller input.

Xbox compatibility and support for gamepad input are not the same thing - players on non-Xbox platforms can (and do) use gamepads too.

You need to implement custom bindings for controllers, something that isn’t required, but possible for PCs. There is no reason to do that if not even 1% of your players will be playing on XBox because of a missing key feature in RP.

Xbox has extremely precise parental controls that allows parents to not only disable chat features, but certain parts of it and even which users are allowed to interact with their child through any type of communication, not just text chat.

As far as I know, any games that require an Xbox Live Gold membership should support these parental controls so their child can stay safe online no matter what game they are playing. I’m pretty sure Roblox doesn’t support the extensive Xbox parental controls that include things like only allowing Xbox friends to chat with you, etc.

Will this be reinabled in the future?

i’m not sure what you mean, the entry point code system works fine, and that uses the xbox keyborad

This change honestly is effecting hundreds and hundreds of Roblox games and having minimal to large effects across Roblox. If I am understanding correctly, while I do think that safety is important, I think that it would make more sense for Roblox to temporarily keep a rating for higher audiences rather than just removing chat altogether. (See below reply)

So remove chat and basically cut off xbox players from pc and mobile players… ok? What is the point of having xbox players in non-xbox servers then if they can’t communicate???

They didn’t remove chat, it’s a bug. It’s been resolved.

What do you mean it’s a bug? An admin literally replied to this thread to say it was intentional.

2 Likes
Is there official guidance or comment available for custom Xbox chat? Am I the only one confused?
next page →