It’s hard to find an incentive to insert the Premium Purchase modal into our games.

For those who don’t know what that is, it’s an optional pop-up you can add which asks the player if they’d like to purchase Premium. 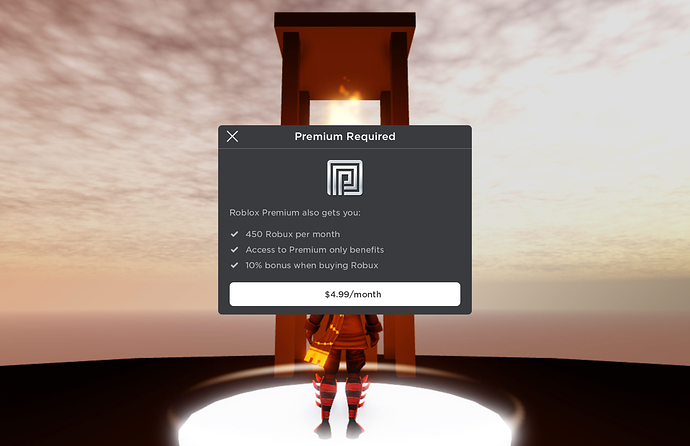 More on it here.

Without several months of statistics, it’s hard to know how much indirect Robux you’ll earn from Premium Payouts.

Why not give us Robux when a player buys Premium from your game?

It would be the equivalent to Star Codes, where Youtubers can get a cut of the purchase when a fan buys Robux.

TL;DR: Give a cut on initial purchase.

If Roblox is able to address this issue, it would improve my development experience because we could add Premium Purchase Modals to our games without feeling like there’s no benefit.

I support this entirely! As a average Roblox user and developer who sees these pop-ups and also configuring or forking it into some of my projects, I can safely say that the ability for R$ to be earned whenever buying Roblox premium inside a game for cosmetics and rewards in it is lacking a lot and feels lot more than a real “scam” by Roblox and sad that they’re not receiving the R$ they bought.

Anyway, this seems like a nice feature to add but also disappointing that this hasn’t been said or added a couple of months ago when this was new and up for developers and users to configure and buy through games. I’ve had some issues with this once in June where I bought premium in a game and never got the R$ I’ve received, didn’t care that much.

A couple of friends of mine and a brother have bought premium through games and unfortunately, they expect some R$ to be transferred into their account and buy some nice gamepasses or accessories which is disappointing at most parts.

At the moment, this feels like a scam to most Roblox users who buy it through games, it doesn’t seem right.

I have a model all ready for when this becomes a reality, until then, it stays in server storage. Your move Roblox.

The disappointing “popular among premium” sort (due to how only ultra popular games will get on it anyway) gives me absolutely no incentive to add this model to my game without the OP ideas. 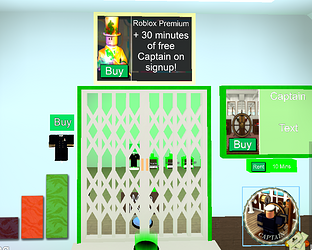 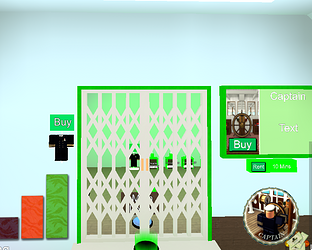 Developers can convert players within their games to premium users.

However, at the moment, developers do not get an upfront payment for converting players to premium users, unlike the star creator program.

The star creator program has existed for a while and
has proven to be successful by having the creator in question capable of earning 5% of the robux purchased up-front.

Arguably Roblox could give more than 5% of the initial sale up-front cause in-game premium benefits give players extra incentives to buy roblox premium in the first place, while star creators more-or-less merely advertise roblox premium.

So in-game, we’re acting as a sales-person and provide related services; so an upfront payment, seems justified, compared to hoping that a player will stick around much-longer after buying premium in-game. Given the two tasks that developers do when converting users to premium, it’d make sense that at least a 10% share would be present; given the lowest tier of roblox premium is worth 4.99 USD = (4.99 * 0.10) / 0.0035 = 142.57 Robux.

I’m currently building my game from the ground up to involve premium-only additions, but I can’t help but feel that I’m still at the shorter end of the stick due to not receiving any direct compensation for efforts which would otherwise have been rewarded if I were in the star program.

Ultimately; I think this small cut would entice more developers to support premium benefits, which in turn makes more players on average inclined to purchase roblox premium, given they’ll have more avenues for extra content; which is a win-win in both Roblox corp and the developers’ books.

What’s the point of adding this to a game if the developer gets nothing in return. I’d say give the developer a 10% incentive of the 450R$ given to the player (gets 45R$ ontop).

I have no reason to implement this as of current as there’s no incentive to do so.

These are the listed benefits of Premium:

Unlike Star Creators, there is no way for developers and UGC Creators to get a sliver from the actual sale; therefore, there is no real motivation to upsell it. Selling Premium to a user to POSSIBLY get a handful of engagement Robux isn’t worth it. Restricting most users from buying an item may not be worth the upsell if less people buy it.

Exactly. Why should we restrict play features behind a premium paywall just so that we can capture 10 minutes of their playing and earn a whopping 5 Robux. We are basically giving Roblox $4+ for the premium being sold and receiving the “ability” to earn a few Robux from that player as a premium payout which doesn’t even get given out until a month has passed anyways.

There is no incentive for developers to ever use the premium up sell model or api and I feel as if it was a cheap way for roblox to trick developers into “earning” Robux while not really giving them anything in return but a possibility of premium payouts from that user. The possibility of that player even returning again is also low already given how many games on the platform there are. Unless you are a large game this does nothing to increase revenue.