After pushing an update to my game Greenville Beta (linked below), it completely vanished from all game sorts (including my own favorites and Continue Playing/recently played games). 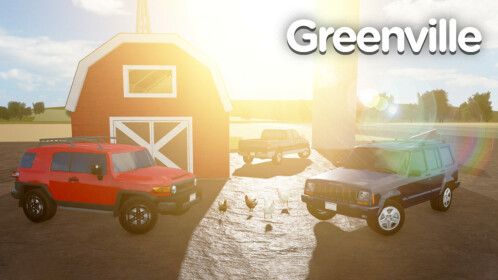 Check out Greenville. It’s one of the millions of unique, user-generated 3D experiences created on Roblox. Greenville is an experience about driving around the town, meeting new friends, and roleplaying. Choose from an absolutely massive variety of...

It is filtered out of a few mobile devices, but its disappearance has happened on all platforms that we’ve tried, including PC, Xbox, iOS, and Android.
Our concurrent players is also going down as a result of this change. Does anyone know how this issue happened, or what it is? We’re trying to figure out what caused this as we’ve been given zero indication of anything that we could’ve done to cause it.

(EDIT) The game is now back on all sorts.

Honestly don’t have a clue what’d happened but just joined and seems to not include it anywhere, maybe I’m thinking it’s some kind of filter but then at the same time how does it have anything to do with the actual website, honestly not sure. Maybe try roll the update back if it’s not major and see if it reverts to showing up by any chance. Again, I don’t have much knowledge in this so don’t exactly know.

Can confirm, I am having the same problems and it is negatively affecting our player count
There are other posts on this as well

Game not showing up on home page Bulletin Board

Last night we had updated our game Treasure Quest. Ever since then, the game won’t display anywhere on the home page (Continue Playing and Favorited). I’ve had other players confirm this as well. This has never happened before and this update was mainly just a new map so I doubt that this had played an effect on why it’s not displaying on the home page. Something I did notice was when you click See All, the game would show under your favorites (This does not occur for the Continue Playing cate…

Game not showing up in sorts (Home & Games pages) Bulletin Board

My game is not showing up under any of the sorts on the Home page (Continue Playing, Favorites, Friends Playing) nor the Games page. I would expect the game icon to be under several of these sorts sorts. It’s my most recently played game and my most recently favorite game, but my home page looks like this: [image] The game should also be sitting around #15 in the Top Earning sort, but it’s not there either. Here’s what I see: [image] The only place I can get the game icon to show up is und…

Today I noticed that my game was not showing up in my recently played or my favorites, and I am getting reports from players that it is not showing up for them as well on their home page. This bug is happening 100% of the time, starting yesterday, Friday 9/13/19. I am using Windows 10 on a PC, accessing the website with Google Chrome. [image] Re-playing the game and re-favoriting the game did not fix this issue and it seems to be only affecting this game. Looking the game up manually in …

From my prior experience, this is due to your game being flagged as artificially player-count inflated. The “shadow-ban” goes away after a few days.

Do you know exactly how this could happen as we haven’t done anything with that?

Yeah same problem here. Nosniy linked my post in an above reply.

Not sure if this means anything but I noticed all of our games are roleplay games, and all with a similar player count. Especially my game and the OP’s game are very similar. However, mine is paid access - making it nearly impossibly to bot the game? We certainly haven’t done that and we haven’t noticed any spikes in player count.

If such “shadow ban” is real, it would help to at least know about it so we wouldn’t panic spam the forums with bug reports and think the site is broken - but I guess it’s ok if Roblox needs to keep it low key to catch anyone who really is botting. Additionally, it may be possible that the unusual spike occurred shortly after the Roblox site outage - during which my game had 0 players, and then jumped to over 1K (normal) once everyone was able to rejoin.

Yup! Same issue for me when my game FISHING SIMULATOR 🎣🐟 - Roblox

I believe its a shadow ban and its SUPER annoying. I dropped to 600 players when last week at this time I had 2,000. It just happened yesterday and it REALLY needs to be addressed.

What ever this shadow ban system is, it doesn’t even work. You can check that there are a few botted games on the front pages right now. All this is doing is hurting real creators.

Here is a thread I just posted:

My game seems to be non-existent Bulletin Board

Because other people are having this problem, I feel it is important to also say that I’m having issues. My game, Fishing Simulator, stoped showing up in my favorites, recently played, and game sort yesterday. It still shows up under my group page and search results. As seen here, I have it favorited. [image] But it is no where to be found in my favorites. [image] And even though I just played it, it’s not in my continue playing either. [image] This is EXTREMELY harmful to my game, whil…

EDIT: I just got unshadow banned. But idk if my game will recover from this

Hey bro same thing is happening to me and plenty of other people, I’ve emailed already last week and I’ve been told that engineers are looking into it. I lost a lot due to this

We’ve lost in particular lost players as well, seems to be a trend of this type of problem.

Well they wont fix it anyways instead I’ve got terminated for breaking Terms of service then they reverted my ban??

Also this has been going on for nearly two weeks

I hope this is fixed soon. My post is mentioned in this thread. My game is still not showing up on my home page and I am currently getting less than a fourth of my average playerbase and this is seriously affecting everything in my statistics

My game has never been botted with fake players or broken any rules, so I am unsure of any reason my game would receive a shadow ban.

Same thing happened to my place, thing is it doesn’t even have any players in it as it’s a testing place, but I can’t find it in my favorites.

I’ve noticed that Greenville (which I also work on, game linked by OP) was disappearing and reappearing in the Continue Playing, Favorites, and Friends Playing sections over and over seemingly at random, and now it’s gone again. Despite it reappearing there, it did not appear in any game sorts on the Games page despite doing so before this change.

I’m eager to find out what is going on as we had absolutely no warning or indication of what happened and I’m very concerned as we initially took a drop of 1.2k players from this when it happened, nearly halving our concurrent players.

I logged on this morning and my game is now showing up everywhere it should. I’ve also tried Fishing Simulator, which was also having a problem posted by @Kullaske and it works too. However, I tried Greenville (OP’s game) but that didn’t show up in my recents. I haven’t tried any other games which were having the problem. 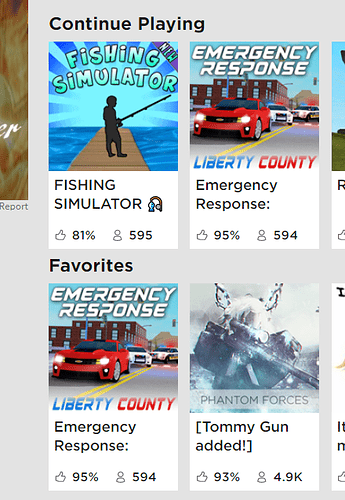 Looks like this is happening with my game Monsters of Etheria as well. This really needs to be fixed, my player count is down and tons of my players are reporting the issue.

I know exactly why this is happening, roblox is trying to prevent botted games so they’re adding them to the shadow ban list. The shadow ban will last around 1-3 days depends how luck you are. Reason why this happens is because roblox thinks you’ve gained way too many players too quickly so they’re remove your game from front page for a while and will put it back on.

This is the reason why your games are getting removed from front page,however don’t worry it will come back. It may be a RIP due to you might not have them 1K players again.

I’d like to think this is caused by the use of our SoftShutdown script, which causes players to very quickly be teleported back into servers after an update. That is, if this is really caused by a shadow-ban system for bots to begin with.

In addition to that, games on the front page had thousands of bots and were unaffected. I’m trying to figure out what’s going on and I’d at least love to hear what happened or why this happened to us. I feel it’d be a great idea to let developers know what is happening rather than leaving them in the dark.

To be honest, I don’t think our game will ever recover from this.

EDIT: A game that was on front page a few days ago that was very clearly botting has been un-shadow-banned already, before Greenville, and unlike Greenville, they actually did bot their game. I feel so powerless and lost here. What do we do?

This has just happened to me Giant Dance Off Simulator 2… I got up this morning and put around 60-80k worth of robux into adverts and now my game seems to be shadow banned… what a waste of money.

This is clearly something on Roblox’s end not working as intended. It’s continuing to severely effect several games, and costing us lots of players (and money). I wonder if Roblox staff has even noticed this problem? Roblox critical?

I’m also getting the same issue with my game not showing up in on the game pages for popular, earning, and even player’s favorites. https://www.roblox.com/games/3237168/Beta-One-Piece-Legendary#
My game fluctuates in the number of users from 2k up to 10k, depending on the time of day. It’s been popular for a long time now. I’ve asked others if they’re able to see my game, and they can only find it by searching for it directly or going to my profile page. I hope the issue gets resolved soon, because I’m seeing a significant drop in daily users by as much as 30-40%.

Edit: The problem has been resolved and it’s now displaying on game pages and player’s favorites again.