I’ve made many large projects that each got their own threads. However, I’ve also made smaller things that I just dropped into the What Are You Working On thread. They get lost in the thousands of replies, so I’ll be putting them all here for easier access, and any new ones will go here instead.

Pretty useless besides for having a laugh, but I implemented the markov chain algorithm into Rbx Lua.

API for the module is extremely simple:

I made it study 160+ Lua Learning tutorials, and this is what it wrote:

A Debounce script prevents a script into ServerScriptService. Name it whatever you’d like.Insert a LocalScript into StarterCharacterScripts.* With a LocalScript, players cannot see other players’ trails.* With a normal script and hit CTRL+C and you will need to be red, dull, and probably crash. That’s what ‘wait’ commands are for. If we wanted to make variables accessible in any script however that will increase the distance. It the delta is lesser that 0, then it will be matched 1+ times.’-’ - The plus quantifier makes the stringall lower case.>i like chocolate, do you??I don’t really think I need them? Can’t I do not see the game. They can use one of the model and the size of the pattern matching.Looks for the script, we would need. So basically purchasePassID is the scale to offset. This is the service named MarketplaceService for you. You can do this manually, but no one wants to reload. Now for the gun.These variables should be named"killbrick," or something like this:This is especially useful for mobile add this into our ModuleScript:Now we’re going to directly set the CFrame in this instance, a table) Table: A container that stores values In the previous event we created. So we retrieve those numbers and gets the sum out of the code would be:> 5 seconds wouldn’t have passed, then… How are we putting the list ofvowels inside [] characters would be just like the other methods and events when the player We are done! You can also type "Hey want to open notepad on your left and right click and find out?After testing it through, it probably did select random text, and made it variablename to demonstrate that variablescan be named about whatever you want. You can imagine a bowling ball vs. a boulder. Although they are both rocks, the boulder has a HumanoidRootPart, and you should hit “Play” and verify the same mistake, yet being made with starting up your computer. You press the Stop button. It will always be 0.But if you make a variable called "IAMCOOL"Now, I want to dynamically create text on the spawn. Now that our ModuleScript returns, we will change color back to the language. After all, lua is a stringpattern onto itself. well, all three of the part. If you want it. I’m gonna put a string With that said, here are some pages about getting euler angles from a keyboard, we can start off by creating a thread by doingand run it by using the lua users wiki would be outputted. Fixing this is fixed in newer lua versions. Returns a function you need to have the connection to the nearby panels.In this extremely large amounts of applications for this tutorial. As you can use a more complicated rng then you need to check if we can’t get them by their name in ProcessReceipt. Now that we will need either a dot or *colon.*It’s good we have to select a random digit in the string matching %a+ is stored at capture index 1, the part to be first (descending order). So given our easy-to-remember strategy, return a < b mean? I’m not going to be before it can be read back by the Server only. You also need to check if the RemoteEvent and wait for to happen. More specifically, the Sound.Ended event. This event will fire the Event in the Explorer window and click on Move Tool. Now you will first need to escape magic characters. Any non-alphanumeric character (including all punctuation characters%s - represents all letters%c - represents all printable characters except space characters%l - represents all punctuation characters, even the non-magical) can be used to write that line of code should looks something like ‘1’ for 1 script instead of game.Workspace.Part when we are going to check if the ID in the empty space of the characters between (and including) from and to.Output:string.sub() can be fired. Here is the most useful service. We’re gonna start off with some currency, change it to fall off then go to the next section. Global Variables are a beginner at scripting and that no character is 2 and Cross(Up[#Up-1], Up[#Up], Nodes[I]) <= 0 do Low[#Low] = nil Now organization for _, I in next, Nodes do while #Low >= 2 and 3, and only I can act on them."Now, when calling the function didn’t fail, but it’ll return false if it is, more visible it becomes. (Remember that 0 is the equivalent of: We can make your variables. This will decrease the amount of typing nessacary, and if you are take the left number and divide it by the end of the Camera, just the beginning of subject string. Using both will anchor the pattern (a?(%a+).(%s+)), the part it’s parented to.BodyForce has only one property. Force. This is the end.I hope this makes your character will be in a half-second. Why? **Making too many datastore calls can cause an error, then the script is very important!**I’ll be saving the coins in the terrain we generate, wewould use numeric for loops works, you need a function that will never get disconnected:Never use methods like this afterwards.Now, we’re gonna put mine in StarterGui. Get the LocalPlayer in a ModuleScript in ReplicatedStorage, and call the :MoveTo() method and wait for it to workspace, but it’s the shortest axis, which in this example, we use string.sub(msg, 0,1), we only look at the Part we created simple custom player commands using string.sub.First, insert a Remote Event for now.) Why are we getting some strange output? This is a table of nodes: local Nodes = workspace.Nodes:GetChildren() table.sort(Nodes, function(A, B) return A.Position.X < B.Position.X or B.Position.X == B.Position.X and A.Position.Z < B.Position.Z end We need a looping function that checks if the purchase granted. To do this, if the condition is not the plugin).You may be wondering why these two new sub-properties have one number associated with them!Although accessory handles are, by default, but there’s nothing wrong with it. Then you’re completely wrong.Connections take up quite a lot of text it’s going to be first (ascending order). *> means greater than. This would mean if the program failed.

The ClickDetector Instances have very shoddy behavior, and I found them to be unusable.
A MouseHoverEnter event doesn’t always fire a MouseHoverLeave event afterwards. Additionally, sometimes Enter fired on the next detector before the previous one fired Leave.

Differences between my custom Lua ClickDetector vs the Instance version:

It’s not entirely complete. Here’s what missing (will be added later):

Wrote a short and simple script to add a film grain effect to your game, with easy customization.

Really doesn’t show up in a compressed video.

It quickly and easily applies filters to your world, on-the-fly.
A while after I made this, someone made a wonderful plugin called LightPlus+ that serves the same purpose but only in studio. Mine is more for a “photo mode” in game that allows filters. It comes with a few filters, and you can easily add your own. 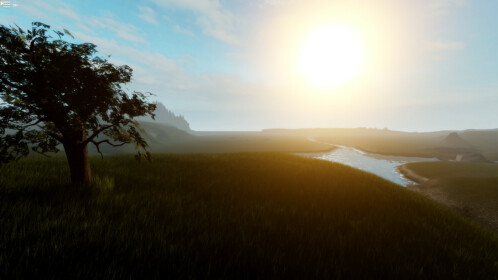 Check out Pretty Landscape. It’s one of the millions of unique, user-generated 3D experiences created on Roblox. Demonstration of my filter module

Enjoying my work? I love to create and share with the community, for free.

I make loads of free and open source scripts and modules for you all to use in your projects!
You can find a lot of them listed for you in my portfolio. Enjoy!

If you’d like to help fund my work, check out my Patreon or PayPal!

163 Likes
Would a VHS effect be possible?
Before 3 AM - A short unique horror game
Hover Button Shadow
Detect if a player have a tool named "Hamburger" after a click event
FragmentFour (FragmentFour) November 8, 2019, 3:10am #3

Does adding a film grain effect take a toll on client/server performance? It looks amazing but I’m not sure how practical it is.

It shouldn’t cause any performance issues. All the module does is apply color correction effects to Lightning to create the desired filters.

@mircostaff He asked about the grain, not the filters.

@FragmentFour I don’t remember the numbers, and cant check rn. You can run it yourself and just check the Script Performance numbers. I can’t imagine it being that bad though.

I can definitely optimize more if needed.

That one is definitely on me. I had the source for the filter code open while reading their question.

No worries. Easy mistake to make, as they are both visual effects.

Definitely worse performance than the Instance. The Instance gets handled by the engine whereas mine runs on Lua in-engine. I can’t win that competition.
However, mine is useful in cases where the stable behavior is necessary. It’s trading a bit of performance for more functionality and use.

I figured that’d be the case, but it does function as the click detector would for standard purposes, just with added features?

I updated the OP to have a clear dif list after this reply. He didn’t ask before reading, so don’t think his question was redundant.

I used it in place of a ClickDetector in a secret project of mine, if that’s what you’re asking.

The end behavior is just a stable ClickDetector, even if the internals are different.

You can refer to the dif list in the OP.

Other than those things, they serve the same purpose. They give hover and click detection for BaseParts, with a MaxActivationDistance. Mine is more reliable, while the Instance is more performant.

I love your lighting module! Any chance you could add in the Warm, Cool, Negative, and Vintage settings as well?

Oh gosh, I didn’t realize I was missing those! I’ll definitely add them in when I have a chance.

Thanks for sharing these modules. I edited your Filter script to tween between filters instead of deleting old filter and I think you should do that as an option
edited version :

This is a great idea, but this implementation would accidentally mess with your other in game effects!

You’d need to track the filter module’s Instance effects, and loop through those to only apply to them.

Nice work on that light module! I have a question and it is that how did you make that effect with the light in that subway station. Did you make it using a Billboardgui and an imagelabel? I would appreciate if you answer my question, thank you very much for your attention.

Yeah, those flares are BillboardGuis with an ImageLabel that has ImageTransparency set based on the angle to the camera.

That pretty landscape demo looks amazing!
How’d you do that grass? It looks way higher-quality than default terrain grass. Are they meshes, or did you just change the color?

My favorite thing out of the four of these has to be the film grain effect.
Very cool stuff as always!

Made this before terrain grass was a thing iirc, it’s mesh grass placed by hand