I had been working inside a place recently whose huge map was cutting back on the time I could work on the place due to how long it took to travel between key points. @FromLegoUniverse had a camera waypoint plugin, but it no longer works due to camera:Interpolate being broken in Studio. I took this opportunity to entirely revamp the concept:


It’s not entirely done right now. It’s missing final touches for: Finishing the keybind customization in the settings, making it so you can’t create groups/waypoints with core-reserved names or using a name that is already taken. It is, however, completed to the point where it can be regularly used. I’m going to take a quick break from this now that it’s at the point where it’d be useful for my original project, but I figured some people might find it useful even without some of the final polishing touches. 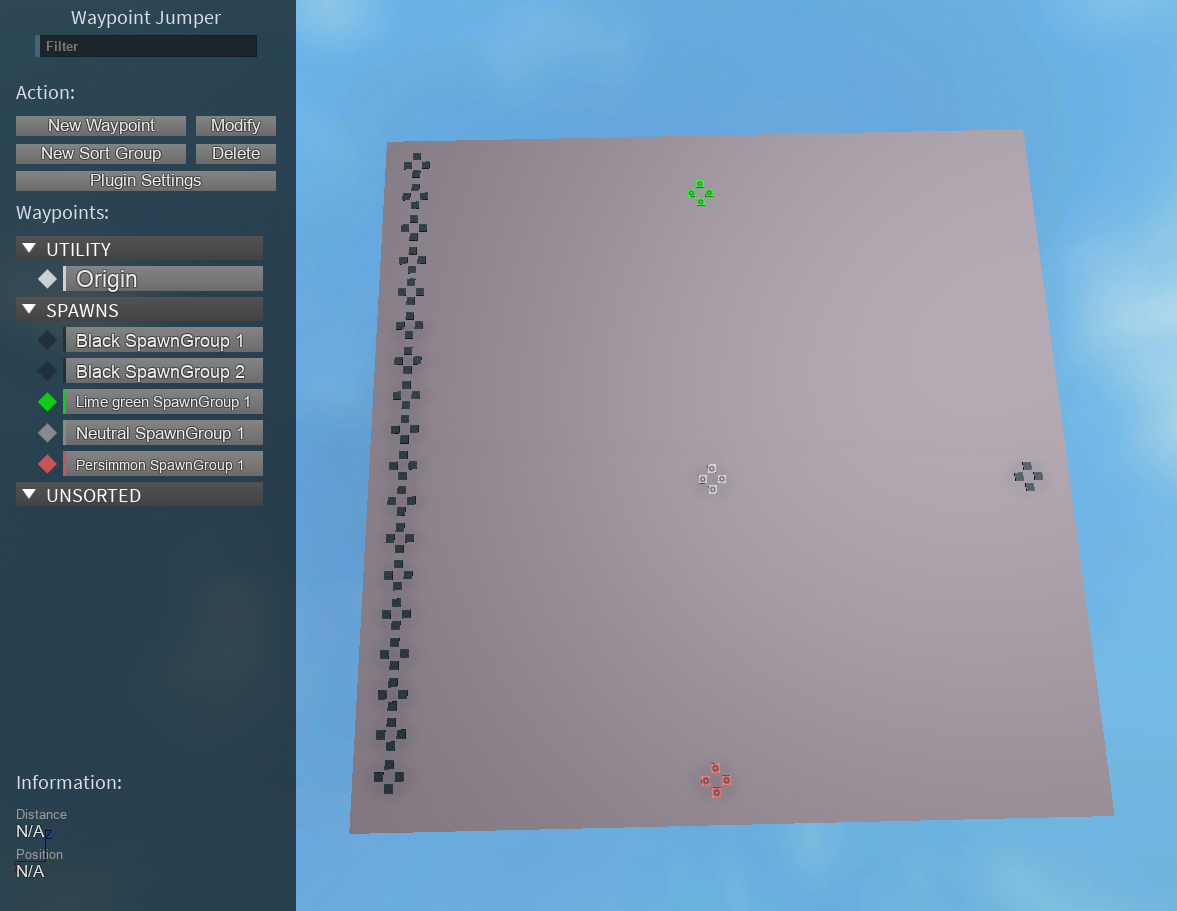 This shows the automatic detection of spawn clusters. Notice how the big cluster on the left is considered one group – clusters are separated by teamcolor and if there are no similar spawns within 20 studs of a spawn in another cluster (which is why the small black spawn group is considered separate) 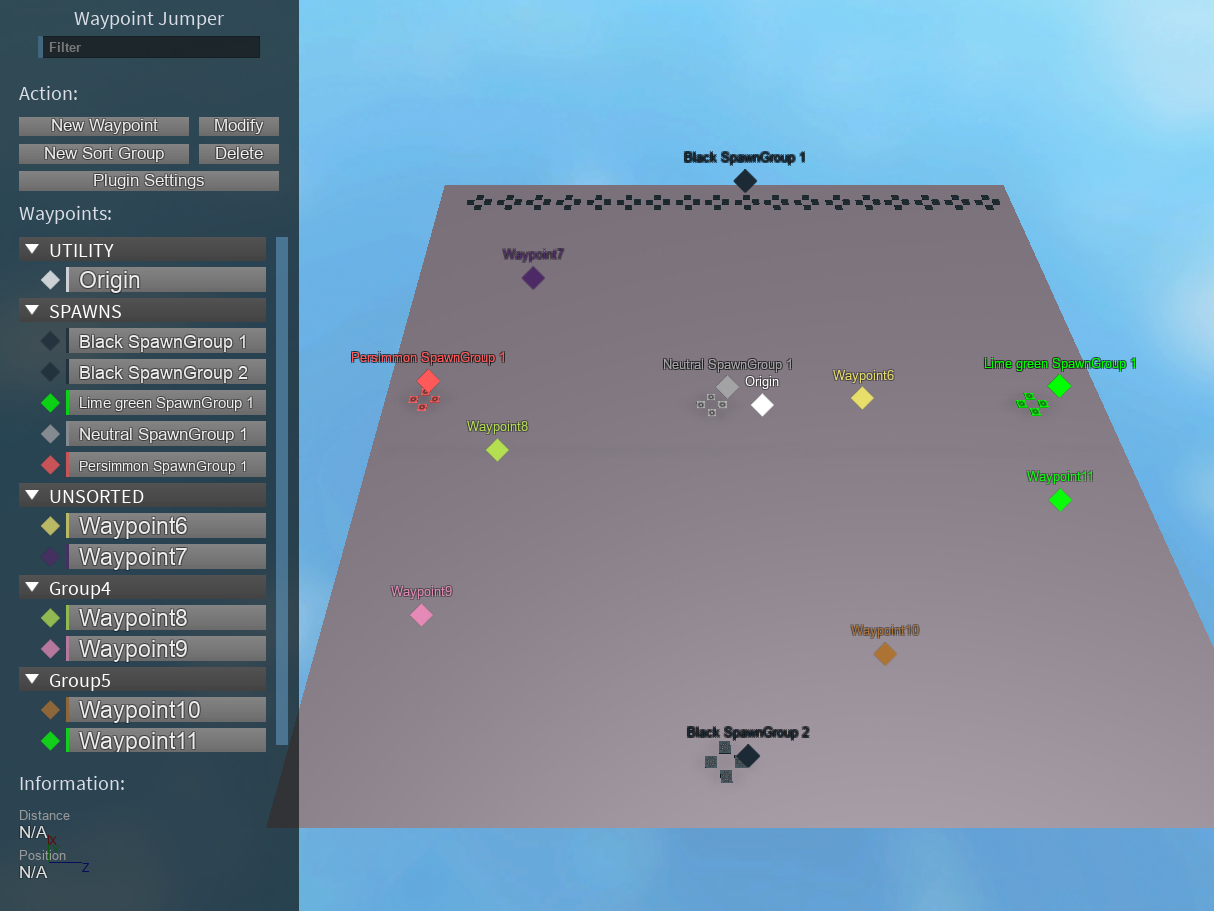 This shows the 3D markers and the use of custom waypoints/groups (holding C will toggle the 3D markers, which are disabled by default)

23 Likes
Renaming the "Cool Creations" section
Free camera in Studio is too slow at large scales
To-do list window like Visual Studio
Looking for builders/programmer for an Incubator team
Is there a way to set a "Spawn Point" for your camera in ROBLOX Studio?
jcfc (jcfc) April 11, 2016, 2:35am #2

Excellent, I’d definitely use this on something I’m currently working on (The map is pretty large)

This is nice, probably going to use it!

This is very nice, I might actually use it.

Just a few bugs I came across while playing around with this:

Additionally, are waypoints supposed to save the camera angle at which they were set?

Either way, this looks like a fantastic plugin that I’ll be using a lot from now on.

Additionally, are waypoints supposed to save the camera angle at which they were set?

Yes. Is this not happening? Or is it undesirable?

Tapping “c” while focused on a TextBox will trigger the menu opening / closing.

Oops – small mistake on my part, not checking if ROBLOX had processed the key. Fixed.

This happened when I deleted a sort group:

I don’t have the time to look into what’s causing that right now, but I put a band-aid on the responsible code. Maybe you had two waypoints with the same name? I haven’t added in code to stop that yet. Either way, did you notice any weird behavior when the error occurred, or was it fine except for the error? If it’s the latter of the two, the band-aid should have fixed the problem.

If you find any more errors with the plugin, let me know! I’ll try to find the time to fix them. Hopefully they’ll be quick fixes like the two you found there.

Yes. Is this not happening? Or is it undesirable?

It’s not happening, but I’d love it if it did. I can’t figure out what it’s doing, the camera is facing a different direction whenever I jump to a waypoint, sometimes it seems to correlate to my previous camera direction and sometimes it doesn’t.
Additionally (and this might not be something you can solve, I’m not sure), when you do jump to a waypoint, your “focus” is still set to the last point you were at, so when you right mouse to move your camera around it rotates about that last, most likely faraway point.

Either way, did you notice any weird behavior when the error occurred, or was it fine except for the error?

I didn’t notice anything weird after the error.

If you find any more errors with the plugin, let me know!

In my efforts to figure out how to get ‘Modify’ and ‘Delete’ to work I ended up doing this. I’m not entirely sure what I did, but I might have added a second waypoint of the same name, like you mentioned. The hover effect for ‘Delete’ had gotten stuck on one of the waypoint buttons after this happened. This might not be helpful at all given I can’t repro it, but here you go anyway.

It’s not happening, but I’d love it if it did. I can’t figure out what it’s doing, the camera is facing a different direction whenever I jump to a waypoint, sometimes it seems to correlate to my previous camera direction and sometimes it doesn’t.

Goodness me. What a silly error on my part. I use a custom camera that already is set to the Scriptable type. If you’re using the default Fixed camera, you’ll get that awkward behavior when you try to move the camera. I forgot to temporarily set the camera to Scriptable when teleporting. Fixed!

Are those errors you posted from after you updated or before?

Are those errors you posted from after you updated or before?

Those are from before.

How dynamic is it? I have a rather large game that I’m working on with a team and we load chunks in and out in Studio. Would it cope with that?

If the chunks have different locations in the worldspace and your chunk loading plugin loads/unloads chunks when the camera’s CFrame is changed, then yes this should be compatible.

I guess it would still work in that case. You could create a group for each chunk, and then place waypoints inside the appropriate group. Since the chunks aren’t moving, the camera waypoint plugin will still work – the only unexpected behavior is that warping to the waypoint for an unloaded chunk will move you to a place in the current chunk instead of loading the new chunk and then warping. I don’t know if you guys would prefer to use a modded version of the plugin that specifically switches chunks based on the group they’re in, or just manually load them before jumping though.

This is super cool, I was thinking of making something like this a while back (but looks like you beat me to it

Thinking of doing any in-game camera integration with this?

What do you mean by in-game camera integration?

Also, btw, there appears to be a bug with the visual markers. For some reason, your camera will stop being responsive, and when you click, you warp to a waypoint. I’m assuming something is going on where a waypoint is getting locked to the camera somehow, and the camera stops being responsive because your screen is covered by a giant button (since it’s so close). Even if I fix the buttons being locked to the camera though, you still may run into an issue where you get too close to a marker and it steals control in a similar fashion.

Does it sound like a good idea if I fade out markers once you get within a certain distance of them?

Also, there’s another bug where markers won’t show unless they existed when the plugin first ran or were created while markers were enabled (if you create them while markers are disabled, they won’t show up). I’ll fix this when I have the time.

Something like using these camera waypoints for the ingame player camera. Some way to script movement + animation between the different waypoints?

movement + animation between the different waypoints

i.e. setting up cutscenes using the plugin? This is more geared to helping you jump around your workplace easily than anything else. There are a number of plugins already in the Library specifically tailored to creating camera cutscenes, so I don’t see a benefit to including that sort of behavior.

The searchbar works with string patterns.
This might be nice, but when the searchbar contains an invalid pattern… lots of errors

Oops. Low priority bug right now though since most people don’t use string patterns in the searchbar and I’m not currently working on the project I made and used that plugin for.